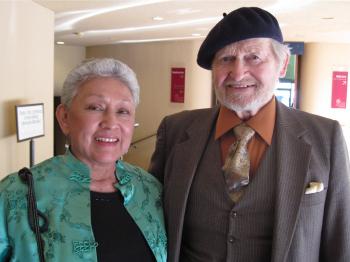 By Epoch Times Staff
Print
SAN JOSE, Calif.—Two former teachers attended the final Shen Yun Performing Arts show and were enthused with the show as it wrapped up at the San Jose Center for the Performing Arts on Sunday, April 10.

Rachel Raddox, a retired Spanish, German, and English teacher, attended the performance with Mark Briggs, a retired high school art teacher. Ms. Raddox said that “we loved” Shen Yun, adding that “it was exciting and wonderful.”

“I find the … wonderful background [and] the illusion of coming out of the sky into the stage fascinating,” Mr. Briggs said. Shen Yun features a digital backdrop that the dancers interact with, and depicts ancient China, legends, and modern-day society.

“I find the painting of the backdrop unbelievably excellent, the sense of balance remarkably subtle,” he added.

The main focus point of Shen Yun is the dance. Classical Chinese dance is the main medium of expression the performers use, which features a vast array of movements but is able to express the inner meaning of Chinese culture.

“Well I think it is just impressive,” Mr. Briggs said of the dancers. “I tried to find somebody exactly out of position somewhere. I never saw it. The synchronization of it was fantastic.”

He added that it was the second time he had viewed the performance.

Attending the same show was Marina Marchenko, a mathematician from Russia, who lived in the U.S. for the past five years.

“I liked this performance so much I will be very happy to invite all my friends, all my relatives … people [should] come and see this incredible performance,” she said.

Ms. Marchenko added that the show was able to bring out the traditional culture of China as well as its history. “I love it so much,” she added.

With reporting by Gary Wang, NTD Television, and Jack Phillips.