Former Symphony Board President: Shen Yun’s Music Is ‘Almost Like a Resurrection’ 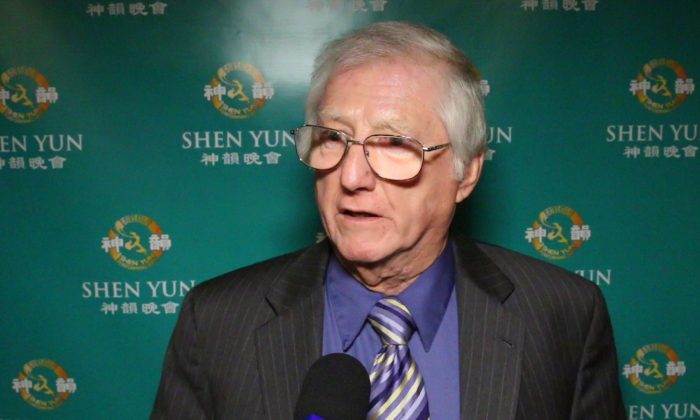 Robert Coons is former president of the board of directors of the Elmhurst Symphony Orchestra, which has been a professional and award-winning symphony in the Chicago land area for 53 years.

Shen Yun is a New York-based company that through its performances, sets out to complete its mission of establishing the restoration of traditional Chinese culture.

Mr. Coons commented that during the performance he had a feeling welling up deep enough inside that he couldn’t help wanting to tell people about it.

Making a generalization about the level of discipline and skill the orchestra displayed, he commented, “The skill level is right up there at the top with the best professional people. They’re very talented young people that are on the stage. I see their level as being excellent, just excellent.”

“The orchestration is beautiful music, beautiful sound, soothing to the ear, [and] comforting,” he added.

Mr. Coons truly liked all the dancers. “They were so much in-sync. They were synchronized very, very beautifully. I love that. The athleticism of all of them, as tumblers, … it shows a great talent that these people have. I like that very much,” he said.

He noted that the coordination between the dancers and the orchestra was beautifully done.

A unique characteristic of Shen Yun’s symphony orchestra is that it combines the sounds of a traditional Western Orchestra with Eastern instruments such as the erhu (Chinese two-string violin) and the pipa (Chinese lute).

Mr. Coons noted the interesting juxtaposition by the way traditional fine arts from centuries back were incorporated and presented in such a contemporary way. “I think it’s just an amazingly different presentation, a different program from anything I’ve seen from Broadway or here in Chicago.”

Typically Eastern music is based on a five-note, or pentatonic, scale and Western music is based on an seven note, or diatonic scale, and so combining these together on such a grand scale can present a great challenge. “They handle that challenge very well because it’s very pleasing to us, very pleasing to the ear. It is not dissonant,” Mr. Coons clarified.

Besides showcasing Chinese classical dance accompanied by the symphony orchestra, several of the segments of the program also feature solo vocal performers.

He said that the voice range of the soprano was amazing. “It was beautiful,” he said. “She carried the song so well, you could feel her emotion in it. I sense that emotion as she was singing through. And her range at the end is just beautiful.”

Of the baritone he noted how his voice was so deeply resonant. “I’d love to hear him sing, hear him sing something in Western music. I think he would be amazing.”

Mr. Coons also mentioned that one of the most incredible things for him, besides the music, were the backdrops. “The backdrops were phenomenal … as it changed when it went from being stationary to something being active, in motion. As the people would disappear into off of the stage, or out of the scene and back into the stage.”

He said that he would come again, and admitting it sounded somewhat like a double negative, he would tell his family and friends “It’s an experience that you won’t understand how much you’ve missed unless you’ve been here and decided to not be here.”