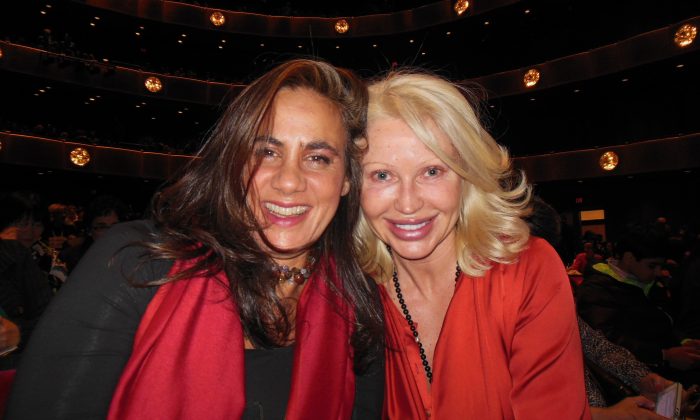 A lover of Broadway shows, musicals, ballets, and operas, Mrs. Spector knew Shen Yun was something else entirely after seeing a sold-out showing of the performance at the David H. Koch Theater at Lincoln Center on Jan. 15 with her friend Eelisa Caraballo. “This show is something different,” she said. It was “a step beyond” any other form she had seen.

In particular, she admired the female Shen Yun performers for their grace, their elegance, and their humility.

“The dance is nothing that anybody else could do,” she said. She commented on their delicate footsteps, the refinement and humility reflected in all of their dance movements.

“Everything has to be so controlled and kept together and maintained well as a woman,” she said. The traits she saw in the dance were reflective of the culture, she said.

But Shen Yun is banned from performing in China today, as the Chinese Communist Party has suppressed traditional Chinese culture and beliefs for many decades in the mainland. Within the performance, the artists are able to show their desire for freedom of expression, the emcees said, freedom to celebrate tradition.

What Mrs. Spector took away most from the performance was “the manner of the women, and the appreciation to be together, and the fight for their beliefs, something that we Westerners take for granted,” Mrs. Spector said.

She hoped the performers could achieve their dream of reviving this traditional culture.

Traditional Chinese culture spans an extraordinary 5,000 years. The performance draws from China’s many dynasties as well as the 56 different ethnic groups that inhabit the region, all imbuing the culture with their own idiosyncrasies.

She hoped Westerners could learn more from the traditional culture presented within Shen Yun—a culture valuing refinement, elegance, humility, and a strong sense of community. She said in Western culture, an increasingly open culture, these mannerisms were disappearing.

As a former figure skater for a Swedish team, Mrs. Spector trained extensively back in her day. So she loved the extraordinary detail and precision of the dance movements, she said.

“It looks so easy; that is why it is so difficult.” Perfecting the dances must have taken “hours and hours in front of the mirror,” she said.

“I really appreciate the arts of it, the expression, and the artistic flowing,” she said.

Her friend, Mrs. Caraballo, similarly thought Shen Yun was beautiful, and she loved the performance for educating her about classical Chinese dance as well as the stories and traditions that characterize Chinese culture.

Although tickets are sold-out for Shen Yun’s January performances in New York City, the company will be returning to the city in March.