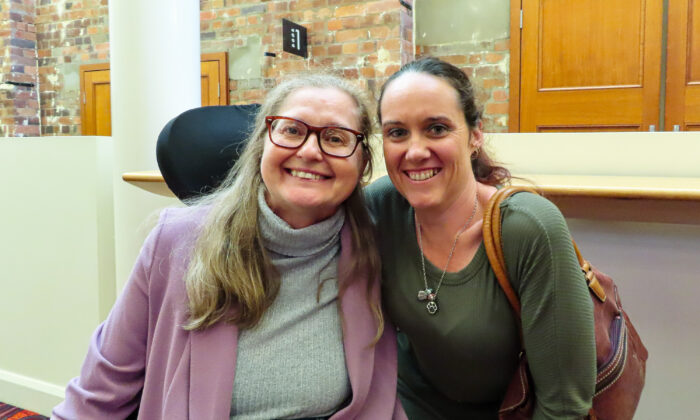 New York-based Shen Yun has been touring the world each year since 2006 to revive authentic Chinese culture. This year, Shen Yun declares it is presenting “China before communism.”

It was Ms. Schneidwin’s third time seeing Shen Yun. She described her overall experience as “absolutely fabulous” and “a spectacular blend of dance and storytelling using traditional and modern techniques.”

Shen Yun prides itself on providing the audience with the most traditional artistic experience, whether in lighting, sound, or stage design while incorporating some of the most advanced technologies.

Shen Yun says its backdrop seamlessly interacts with the performers on stage such that performers can effectively “travel back and forth” between the physical and digital, with the animated images appearing to be lifelike extensions of the performers. The effect has its own patent, issued in 2016.

Shen Yun artists today follow in the noble tradition of ancient Chinese artists, who would practice meditation and self-refinement in the pursuit of creating art from a pure mental space.

As a former theatre-maker [playwright], Ms. Schneidwin said she was grateful for the hard work the artists have put in.

“What if somebody hadn’t gone to the trouble of preserving this work? What if the one company never started or the two people that started the company never did it? Then we would be lacking all of this beauty, knowledge and inspiration and skill,” she reflected.

“If it wasn’t for all that trouble being taken, you’d have robbed the world of its diversity and its beauty and its colour.”

Janine Stark was gifted Shen Yun tickets from her mother as a birthday present. Ms. Stark attended the performance on May 4 and brought her daughter, Sienna, along.

“Very glad we got her out of school for it. And I wish I brought her brother,” Ms. Stark remarked of her first time seeing Shen Yun, saying the experience was educational.

Ms. Stark, who owns a business as a face painter, said she “absolutely loved the colours” in the performance.

Ms. Stark also praised the storytelling quality of the dances: “It’s amazing how much of each story you could pick out from just the movement without having to have someone explain it all, you could just understand everything is happening.”

“This element of the art, however, is not based solely on movement,” Shen Yun says on its website. “It’s based on an understanding of the art, and on the artist being able to connect with and emulate the nature of a character.”

“We’re convinced we’re definitely coming every time. I want to come back again today,” she added.