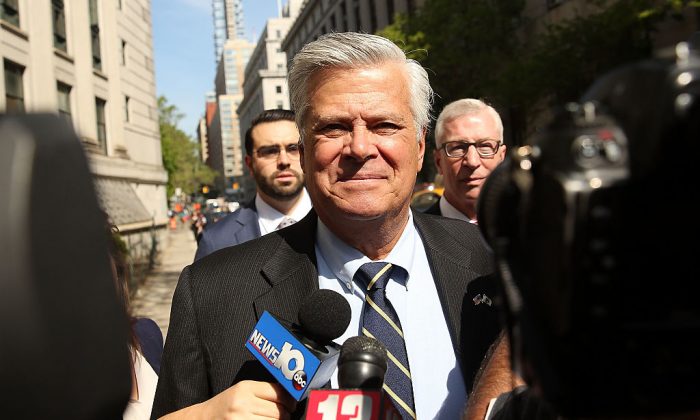 NEW YORK—The once-powerful New York state Senate majority leader, Dean Skelos (R), returned to court on Monday in a retrial of corruption charges that he and his son were convicted of three years ago.

The indictment alleges that three companies paid Dean Skelos’s adopted son Adam a combined $300,000 for low- or no-show jobs in exchange for passing legislation favorable to their businesses.

Dean Skelos maintains that he did not use his position to his son’s benefit, saying last Friday that using his office to get favors was not how he was brought up.

In a surprise move, the elder Skelos testified in their defense, saying that he was merely seeking help from “friends” for a son who had struggled with academics and later addiction problems.

“Quite frankly, I’ve asked a lot of people to help my son. If I had the opportunity to ask somebody to help Adam, I did it,” he said, according to The New York Times.

During cross-examination on Monday, he did admit that the kind of help he was seeking for his son was financial.

The two were convicted of bribery, extortion, and conspiracy charges in 2015, but a Supreme Court decision in 2016 narrowed the definition of corruption, and defense lawyers for the two sought a retrial.

The Skelos’s conviction was a coup for then-United States attorney for the Southern District of New York, Preet Bharara, whose work led to the conviction of 11 legislators in six years.

He was known for taking on Albany’s corruption, which was put on display when both Skelos and former state Assembly Speaker Sheldon Silver were convicted on corruption charges in 2015.  Both had been in politics for over 30 years and were often two of three men in a room during the state’s budget negotiations.

Silver was found guilty again during a second trial this May.