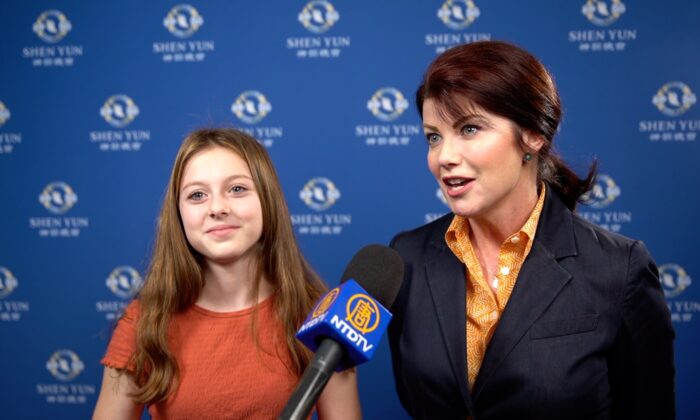 MILWAUKEE—Rebecca Kleefisch was elected to be Wisconsin’s 44th Lieutenant Governor from 2011 to 2019 thanks to a philosophy she called “kitchen table common sense.” It’s a phrase she first coined the day she announced her candidacy live from her kitchen table. The conservative mother of two and former news anchor attended Shen Yun Performing Arts with her daughter, Violet, on Feb. 2, 2020, and praised the performance for its artistic and educational value.

“I think it’s an outstanding performance,” Kleefisch said after the performance at the Miller High Life Theatre. Kleefisch now serves as a jobs ambassador for Associated Builders and Contractors of Wisconsin.

“This was our Christmas gift and we think it’s just about the best Christmas gift we could have received, because … [Shen Yun] is a cultural experience as much as it is an arts experience,” she said.

New York-based Shen Yun’s mission is to revive China’s five millennia-long history through music and dance and to share that ancient wisdom with the world. Since time immemorial, Chinese culture has been deeply spiritual and has always believed in divine beings who influence life on earth, and Shen Yun continues this tradition through the narratives it portrays on stage. The name Shen Yun means “the beauty of divine beings dancing.”

Kleefisch and her daughter found the cultural aspect of the performance rewarding, and the artistic abilities of the performers stunning.

“The dancers are so well trained,” Kleefisch continued. “We are amazed at their extensions, their athletic ability. But on top of that, the singer, the soprano we heard was extraordinary.”

Shen Yun soprano Min Jiang sang a piece titled “Words of Encouragement” in the traditional bel canto style. Shen Yun’s vocal musicians are themselves reviving an ancient piece of culture, since, according to Shen Yun’s website, “Only Shen Yun’s singers are now again using this traditional and ancient technique [bel canto] on the modern stage. Their ability to perform bel canto while retaining perfect Chinese diction is likewise unparalleled.”

“[Shen Yun] is wonderful,” she began, “probably one of the coolest things I’ve ever experienced. I love coming and seeing the show.”

Violet said she had never seen dancing like this nor a show with this kind of cultural aspect. She loved the various cultures included in Shen Yun, which range from Mongolian horsemen, to palace courtyards of ancient dynasties, to touching scenes from modern-day China. Violet encouraged younger kids and also older people to come see Shen Yun, calling the experience “super awesome.”

The faces of the mother and daughter pair lit up when they recalled a Shen Yun dance piece titled “Water Sleeves.”

“Those beautiful sleeves,” Kleefisch said. “They just flowed like water. It was incredible. We’re so impressed.”

As someone who held public office, Kleefisch shared a little about the social value of some of the themes she saw.

“I love the theme of freedom and the theme of religious tolerance because, that’s what we’re getting out of today’s show and that’s very American, and that really resonates with an audience like the one you’re seeing here,” she said.

Some of Shen Yun’s vignettes depict true stories of spiritual believers who are persecuted in China today by the communist regime. Practitioners of Falun Dafa, an ancient method of meditation and self-refinement, face especially brutal treatment. But, as the dances portray, they counteract the violence with compassion, faith, and hope. Emcees speak in between each short dance piece to share context about the often profound narratives in Shen Yun.

“What you’re seeing in Shen Yun is an educational experience,” Kleefisch said. “You get to learn a little bit about Mandarin, you get to know a little about ethnicity, a little about culture—all of that introduced in this artistic way, to a Wisconsin audience. I think is a really great way to spend an afternoon.”