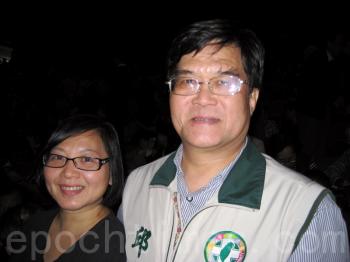 By Epoch Times Staff
Print
TAIPEI, Taiwan—Shen Yun Performing Arts International Company presented 44 full-house shows in its 2011 Taiwan tour, and the last performance at Taipei National Dr. Sun-Yat Sen Memorial Hall on the evening of April 21 wrapped up in a joyful ambiance with three curtain calls and a standing ovation.

It was a common scene to see social elites greeting each other in the show, as Shen Yun has become an annual artistic feast for people in the mainstream society to socialize with others.

He noted that he was tremendously amazed by the Shen Yun show’s perfect combination of artistic elements, saying, “Firstly, the synchronization of performers and the images and scenery on the backdrops is really wonderful. Secondly, the coordination of dances and music is seamless.

"Additionally, China is an immense country, but Shen Yun displayed a lot of beautiful scenery of various places, when different songs were sung or different music was played. The coordination work is indeed fabulous.”

As a senior consultant of the Legislative Yuan, Mr. Chiu expressed that he is fond of arts and culture. He was amazed by the fact that Shen Yun integrates so many elements and makes it a great art.

He added, “In our journey of life, philosophy directly tells us what life is, and drama illustrates life with stories performed by actors, while music demonstrates it via voice and notes. However, Shen Yun exhibits life by blending music, dance, drama, fine arts, literature, philosophy, etc. into its performance."

Mr. Chiu said that the arts pursued by humans should be true goodness and true gracefulness. “Arts are supposed to be a combination of honesty and goodness. In other words, honesty is to tell the truth, while goodness is to have good inborn quality. As to gracefulness, it is the beauty of the Mother Nature, music, and dance. If truths are illustrated in the form of art, it can touch humans’ hearts, intensify humanity and purify people’s minds.”

As the concurrent chairman of Taoyuan Gengxin Cultural Association, Chiu Chui-Chen continued to elaborate on why Shen Yun could rectify the social morality and values efficiently through artistic performance, saying, “As opposed to preaching, Shen Yun directly distills literature, fine arts, and music into human’s hearts through audio and visual means.

"Not only can it penetrate human’s sense of perception, but it can also trigger their rationality, and further combine their rationality with emotion. This is the reason why Shen Yun could touch human’s hearts so effictively.”

In the end, he added, “Shen Yun’s arts uplift human characters of truthfulness, compassion, and tolerance. It is really something not easy to come by.

"As all of Shen Yun performers were performing wholeheartedly, I really admired them very much. Falun Gong is under such serious persecution in China by the Chinese communist regime, but they are still steadfast [in their belief.]"

Mr, Chiu said that after being in the political circle for over three decades, "I feel very sorry to see Falun Gong being persecuted relentlessly by the regime. I feel that their spirit of steadfastness has something to do with the principles of ‘Truthfulness, Compassion, and Tolerance’ written on the blackboard in a scene of a program [Our Story.] I believed it could only be achieved by people with an utmost high level of minds.”