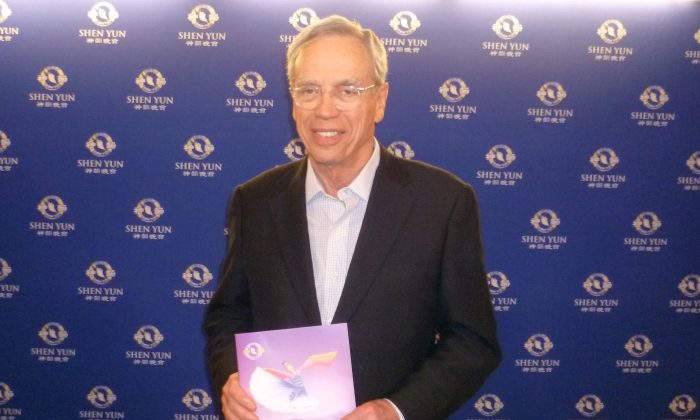 This was his third time seeing Shen Yun, the world’s premier classical Chinese dance and music company, and he was able to discover new depths of artistic beauty and spirituality in the performance.

“Well, the quality is superb. … It’s so elegant. It seems so effortless but it’s probably very difficult to execute … it’s done with so much fluidity and such grace. And then the colors, the costumes, and of course the underlying stories. Sometimes they’re charming, sometimes they’re quite profound,” said Oliver.

Established in 2006 in New York, Shen Yun has been touring the globe to revive 5,000 years of traditional Chinese culture that had all but disappeared under China’s atheistic communist regime. China was once known as “The Land of the Divine,” and its heritage has been developed through rich spiritual traditions, including Buddhism, Taoism, and Confucianism.

Oliver said Shen Yun gives people the opportunity to “appreciate the best of Chinese culture.” He also appreciated the values he saw in the performance.

“I think there needs to be an element of spirituality in our lives because we aren’t just economic vessels. We are also human beings who have values, who have ideals, and who want to take care of other people,” he said.

Oliver noted that people in the West can learn from the rich philosophical traditions in the East, especially China, the world’s longest continuous civilization.

“I think it’s important for us to know our history, and every country has a history. China has a particularly long history. We shouldn’t ever bury it. We should understand what it has to offer today. Even though a lot of it is quite ancient, there’s wisdom,” he said.

Oliver encouraged Canadians to see Shen Yun. “I’d encourage them to see it if they can. …. Ours is a very diverse society with a lot of cultures that can teach us more about what it is to be a productive and valued human being,” he said.