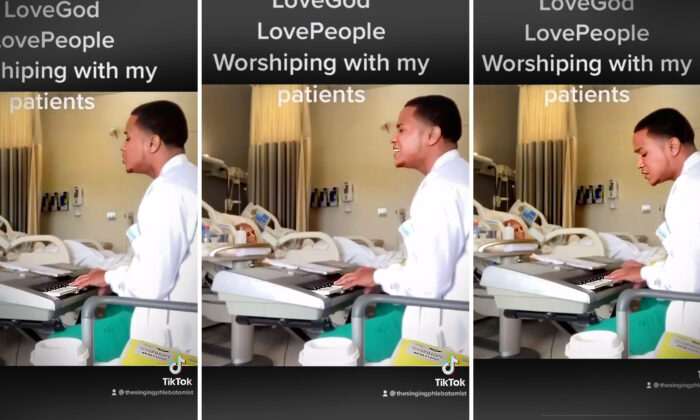 A former New Jersey Bloods gang member turned his life around to become a music singer, and now shares his talent with patients at the hospital where he works.

After posting his video hymns on TikTok, they went viral.

Enrique Rodriquez, 28, from Central Jersey, left behind a life of crime and violence after turning to religion. He is now a phlebotomist at Robert Wood Johnson University Hospital, where he’s become famous for his musical talent.

After he started singing, playing the piano, and the guitar for critically-ill patients in the hospital’s Intensive Care Unit (ICU), he started recording his music sessions.

He started posting his videos on TikTok, where he garnered over 80,000 followers.

“I found God at an extremely troubling period in my life and he showed himself to me when I needed him most,” Rodriquez told Newsflare.

“I know that God wanted me to care for people just as he cared for me, and the hospital was the perfect place to do that.”

In 2009, Rodriguez started getting involved in gangs to fill the emotional void left when his eldest brother went to jail.

In search of what he calls “the wrong kind of family,” and easy money, he joined the local Bloods gang, where he remained a member for three years.

“They make you feel like they care about you, that they’ve got your back that you’re family; but all they do is use you so they don’t have to get their hands dirty.”

Criminal life began to lose its luster for Rodriguez after he crossed the “wrong person,” which resulted in two attempts on his own mother’s life by a rival gang seeking retribution.

The assailants were eventually detained, and his mother survived—a fact Rodriguez attributes to God.

“I have done a lot of bad things and mixed with a lot of bad people,” he said. “I’m just grateful God looked out for me and my family.

“He has given me the opportunity to start a new life, and music is a huge part of that.”

The former Bloods member quickly sought out a job working at the hospital, where in 2012, he got a housekeeping position.

After a year, he finished care training for patients in ICU. He is now a phlebotomist shuttling CCP (Chinese Communist Party) virus and blood samples to labs.

Over the course of his nine years working at the hospital, he revealed his hidden musical talent, teaching himself to play the piano and the guitar.

Although he’s unable to read music, he practiced in his ward, sharing his singing with critically-ill patients.

Rodriguez now video records his bedside performances, which he livestreams on TikTok, to share his talent with tens of thousands of music lovers online.