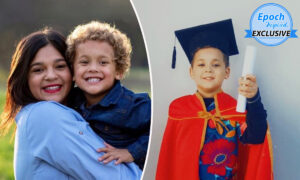 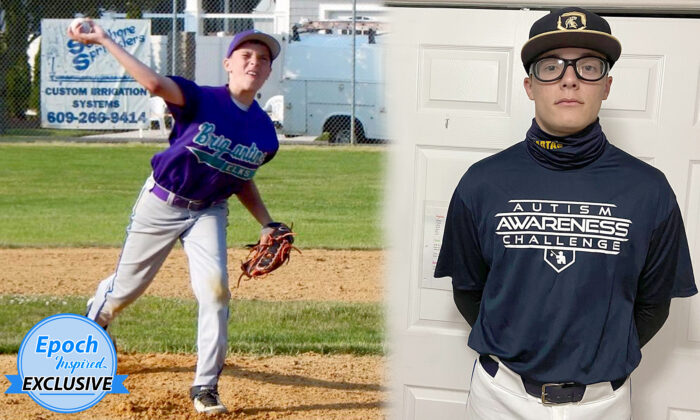 A former batboy with autism has beaten the odds to rise to become a top pitcher for his high school baseball team.

Anthony Solari, 18, a student at the Holy Spirit High School in Absecon, New Jersey, has been passionate about baseball since he was 7 years old.

Talking to The Epoch Times, his mother, Andrea Solari, 51, said her son is proudly addressed as “Wild Thing” by his teammates for his iconic goggle-like glasses that remind them of Charlie Sheen’s signature sunglasses in the movie “Major League.”

And this whole season, the famous Wild Thing theme song will be played whenever this budding star steps out on the game field.

Andrea, a retired pediatric nurse from Brigantine, said that Anthony was diagnosed with autism at the age of 2, but she knew as early as when he was just 9 months old that “something was wrong” with him.

“He was having meltdowns whenever I tried to put socks or shoes on his feet. He had a terrible time sleeping unless he was on my chest,” Andrea said.

“I suspected autism early on so I read everything I could to help my son. He was non-verbal and developmentally delayed until he was 4.”

By the age of 7, Anthony developed a special interest in baseball, and the rest is history, as they say.

With time, Andrea began noticing promising changes in her son’s behavior and how the game was transforming his overall development.

“It is a sport we live in my family, and he loved going to ball games,” she said. “Since his first time playing, he has always been an hour early for practices and games every time.

“Baseball has shaped Anthony’s development and helped him with maturity. It has taught him responsibility and accountability. It has given him goals in life.”

Anthony’s talent and passion for the game didn’t go unnoticed. At the age of 12, his high school coach started giving him lessons on pitching. Eventually, Anthony got the chance to throw out the first pitch at the 2015 Autism Awareness Baseball Challenge in New Jersey and then to be a batboy.

And he had been throwing out the first pitch ever since, said his mother.

So far, Anthony has played as a reliever in 4 to 5 games. In one of the games, the starring boy received the game ball after striking 5 batters, ending the game with a clean win.

In late April, apart from pitching, Anthony also got the chance to face the live batters at the Autism Awareness Challenge at North Brunswick Community Park.

“This year he got to pitch to the first batter,” Andrea said. “Pitching in this game has been Anthony’s goal since freshman year. It made a dream come true for him.”

Apart from the ball game, Anthony is also a Math genius, and his mom said that the complex subject comes “pretty easy” for him.

“His goal is to be a statistician for the Major League Baseball. He keeps a track of every game and players’ stats for the MLB games he watches,” she said. “He collects baseball cards, and we are trying to get every MLB stadium.

“He knows a lot about the ball, it is his passion.”

With his own unique style of pitching, Anthony has garnered a lot of fan following recently; his family has received awesome commendation and applause from other families with children diagnosed with autism.

“Anthony gives them hope that their child is capable of growth with much support and perseverance,” Andrea said. “He is a role model.

“We have received so much support from our community in terms of everyone knowing Anthony and loving him.

“We are truly lucky and blessed.”