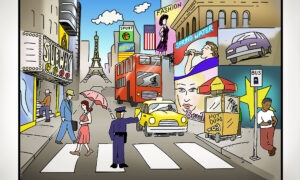 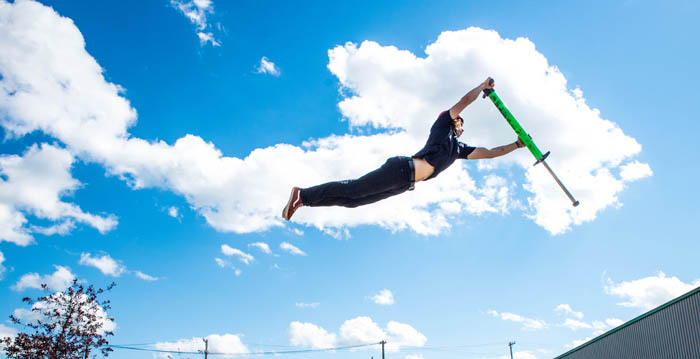 Daniel Mahoney performs a trick known as a Superman at a pogo show in Saskatoon, Canada. (Courtesy of Daniel Mahoney)
People

For 25-year-old Daniel Mahoney of Sydney, Australia, tea is more than just a drink: it’s a way of life that changed him forever.

“Since I discovered tea, its presence in my life has evolved from gulping giant mugs of Earl Grey and English breakfast, to appreciating a single estate colonial tea … to using tea as a meditative and spiritual tool,” Mahoney told The Epoch Times. “All along the way it has been one of the most solid and guiding forces forward in my life.”

Mahoney is now the owner and operator of Wilderleaf Tea. It’s a far quieter and more peaceful existence than the rockstar-like lifestyle he once led as one of the best stunt pogoers in the world.

His journey from pogo stick expert to tea specialist is quite an interesting one, to say the least. Like all things related to this sport, Mahoney’s life had plenty of ups and downs.

“Stunt pogo” isn’t exactly a term that most people hear in their day-to-day lives.

When Mahoney was 10 years old and living in Nova Scotia, Canada, in 2004, he wasn’t familiar with it either. At the time, he was obsessed with extreme sports like biking and skateboarding, but believed that stunt pogoing was an entirely new concept he invented.

Two years later, he was proven wrong when his brother showed him videos of stunt pogoers in the UK doing the same sort of tricks that he used to do. Soon Mahoney discovered a whole community of pogo stick enthusiasts on the Xpogo (Extreme Pogo) online forums.

While the concept of stunt pogoing had been around since 1999, by the mid-2000s, the sport had started to take off. In 2004, pogo stick manufacturers were making sticks designed specifically for performing stunts, and Xpogo held Pogopalooza 1, the first major gathering of stunt pogoers from around the world. The small event held in a church parking lot in Lincoln, Nebraska, laid the groundwork for much bigger events to come.

After learning the history and discovering the community that came with the sport, Mahoney decided he wanted to be a stunt pogoer too.

“I devoted all of my energy from that moment on into pogo sticking,” he said. “I distinctly remember a time I was jumping outside of a school … fantasizing about one day changing the course of the sport’s history.”

Yet Mahoney had no idea the extent to which pogoing would shape his life.

It didn’t take long for Mahoney to become completely sucked into the sport. Within the first year, he had already performed what were then considered some of the most complex pogo stunts.

Not only was he passionate about the sport itself, but the community surrounding it as well. Mahoney didn’t have many friends in school, but the connections he made on the Xpogo forums were real, though he had yet to meet any of the people in person.

“I didn’t belong anywhere really, but pogo sure offered me a sense of belonging I felt I was missing.”

By 2008, Mahoney was making incredible achievements. He beat his pogo idol, Fred Grzybowski, by landing the first recorded front flip with a pogo stick.

“It was this accomplishment that I believe really solidified my commitment to the sport,” Mahoney said. “Things moved fast going forward from that point.”

He released video after video, pushing the limits of what his fellow pogoers thought was possible at the time. Doing so garnered attention from the pogo stick company Vurtego, who wanted to make him their spokesperson.

Soon, Mahoney was traveling all over the globe, breaking world records, and winning almost every competition.

“Literally, at this young age, I couldn’t have imagined anything better,” he said.

All that success fed into Mahoney’s ego, and eventually, his addiction. The man started rubbing his success in people’s faces, including other pogoers.

“I was pushing myself away from the rest of the community as my successes grew larger and larger,” he said.

Around that same time, Mahoney started to rebel against his religious upbringing. He wasn’t supposed to have cigarettes, coffee, or even tea, but at age 17 he decided to experiment with drugs.

“It seemed quite harmless to me at the time and I think a little teenager’s independence and rebellion can be healthy,” Mahoney said. “But, as I got farther away from my religious roots, I felt compelled to push the envelope even farther with harder drugs and more extreme lifestyles.”

Around this time, Vurtego’s promotional trips were dying down, but Xpogo’s stunt team was just starting off, and their trips brought a new element: drugs.

Team members would pass around pills, psychedelics, and alcohol. At a certain point, it became more about the drugs than the pogo.

“I cared less and less for jumping on the stick,” Mahoney said. “I used to love going outside and jumping, but I kept staying inside and using.”

At 19 years old, he developed serious complications with his ankles and knees. Sometimes he was completely unable to walk.

Mahoney knew he had to turn his life around, but he wasn’t sure how; he couldn’t see a future for himself that didn’t involve pogo.

His plan was to start attending college to earn a business degree. He’d work in another industry right away while hopefully getting a non-stunt-related job at Xpogo down the line.

Yet that plan came to a screeching halt when Mahoney’s then-girlfriend broke up with him, causing him to spiral into a depression that made him start using more than ever before.

“Throughout my first two semesters at school, I drank everyday,” he said. “The only time I can ever think of where I didn’t drink was because I either had no money, or because I had some other substance to get lost in.”

The problem kept on compounding. By 2012, Mahoney was using intravenous (IV) drugs.

He tried to be safe but eventually ended up using them daily, spending his whole day focused on drugs and drinking even as he was still enrolled in school.

“I failed most courses and, in the end, stopped coming to classes,” Mahoney said. “I never looked at my grades from that semester even to this day.”

In 2014, Mahoney made another effort to clean himself up. A trip to Iceland with a close friend helped him to do some much-needed healing.

However, Mahoney did not have much time to rest. The following month was Pogopalooza 2014 in Montpellier, France.

There he fell off his stick, in one of the most devastating accidents of his entire career. In the middle of a jump, his hand slipped off the handlebar; the compressed pogo stick shot up and hit him in the jaw. He fell to the ground, had a seizure on the course, and blacked out for the day, suffering a serious concussion.

Mahoney’s fall is the last stunt showcased in the video below.

Around that same time, Mahoney also faced the worst relapse he had ever had and  knew he needed professional help.

“I knew that it was now or never at this point, there wasn’t any deeper I could fall and if I didn’t fix this at that time, I would never be able to continue,” he said.

In August 2014, Mahoney checked himself into a detox facility for two weeks. Paying careful attention to what his counselors told him changed his perspective on addiction.

He soon gave up on all drugs, from cigarettes to IV drugs to everything in between. Of course, this wasn’t the only life change he had to make.

Mahoney had to abandon certain friendships and give up pogo for a time. He needed a new passion.

One day in Halifax, Nova Scotia, he stumbled upon a tea house where he met someone with a serious love for the drink. Soon, Mahoney developed that interest too.

“I used to drink an absurd amount of tea when I first got off hard drugs,” Mahoney said. “I watched my passion evolve and over time it gradually has become less and less about the buzz, and more about the leaf itself.”

This eventually led to his current job as business owner for Wilderleaf Tea, which operates out of Tasmania. Australia, but sells their teas to people all over the world.

With a new purpose in life, Mahoney no longer feels the urge to indulge himself in substances. For over four years, he has managed to stay away from hard drugs completely.

Even with this new way of life though, he hasn’t completely abandoned pogo.

“Will I ever give up pogo sticking for good?” Mahoney asked. “I seriously doubt it. I will always come back to that family and welcome all my great friends to sit down with me and share a cup of fine tea.”