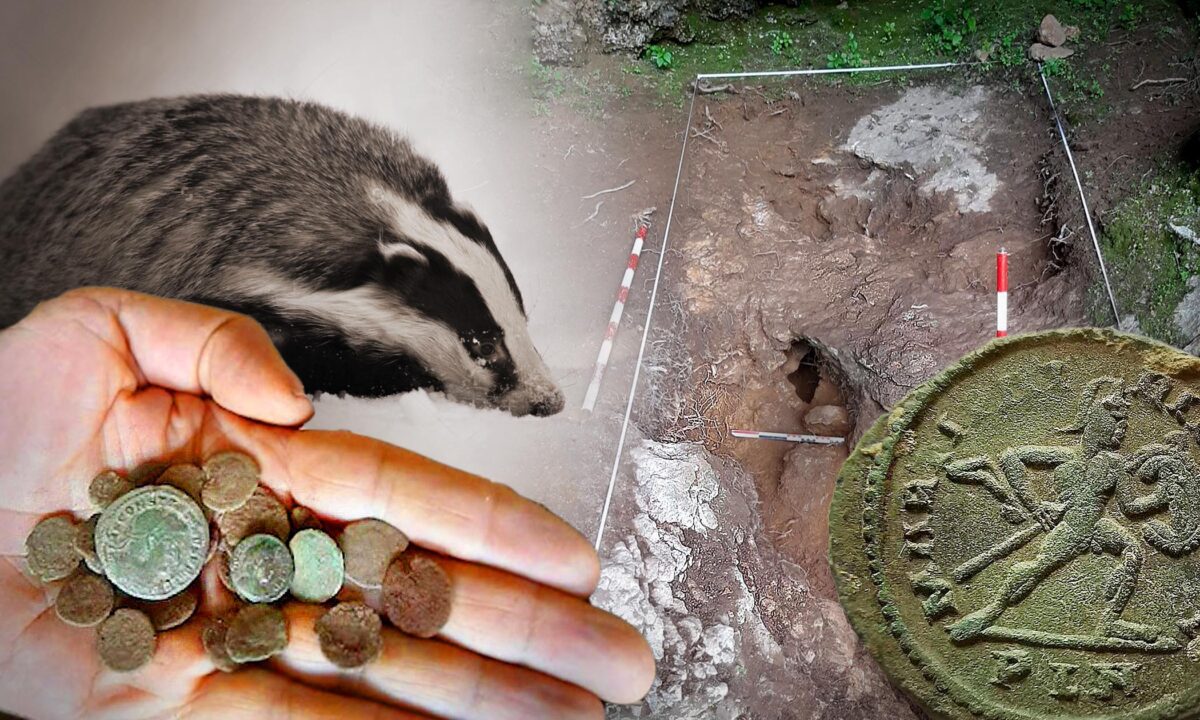 A strange string of events led archaeologists to uncover an ancient treasure trove, dating to the late Roman period, in a river valley cave in northern Spain.

And it all started with a badger.

After heavy snows hit the Iberian Peninsula amidst Storm Filomena in the winter of 2021, one Grado resident, Roberto Garcia, accompanied by two archaeologists, happened upon a hollow nestled in an embankment along the Nalón River in Asturias province. García did observe, according to Spanish newspaper El País, what appeared to be freshly dug soil beside a badger’s burrow and hypothesized that, during the storm, the badger likely dug the hole while foraging for grub, searching for earthworms, berries, or small invertebrates, and incidentally bored into the earth to produce what it would’ve surely deemed unappetizing: pieces of cold hard metal.

This would, however, turn out to be the largest hoard of Roman coins ever found in northern Spain, an “exceptional find” totaling 209 pieces dating from the third to fifth centuries.

After the discovery, the researchers, supported by the Ministry of Culture of the Principality of Asturias, on April 5 last year began an emergency archaeological excavation of the site—located in Berció parish in the municipality of Grado. The cavity juts 16 meters (52.5 feet) into the Nalón River wall and is accessed by a very steep clay slope covered with forest. Removal of topsoil produced a few coins near the surface and a larger number buried below, in what was determined to be a sinkhole about 15 centimeters (6 inches) wide and 40 centimeters (16 inches) deep. The collection is believed to be a secondary “natural deposit” caused by erosion of the cave’s surface, possibly separated from a larger coin repository no longer present.

“In April 2021, [the coins were] located and rescued through a small emergency archaeological intervention financed by the Ministry of Culture of the Principality of Asturias, which until now constitutes the largest Roman treasure in a cave in northern Spain,” the researches wrote. “The number of coins recovered, as well as the undoubted archaeological interest of the moment of transition to the high medieval genesis, make the little treasure discovered in Berció an exceptional find.”

Minted between the reigns of Emperor Carus (who ruled from A.D. 282 to 283) and Valentinian III (ruling between 425 and 455), it is possible the coins were hidden here to secure them from invaders in a “context of political instability,” according to a study, “before the imminent arrival of the Swabians,” a Germanic people who invaded the peninsula from A.D. 409 from the frozen waters of the Rhine, expanding towards the interior of the Asturian-Roman territory. “This accumulation of important findings, being prudent, could respond to that context of intense conflict in a border territory,” archaeologist and excavation director Alfonso Fanjul Peraza told El País. It’s also possible they were stashed here a couple centuries later.

For the most part, the set is characterized by massive wear, except for a few of the highest quality coins, including one of three follis (a coin introduced around 294 by Emperor Diocletian), weighing between 8 and 10 grams, made of copper and bronze with 4 percent silver, minted in London. The other pieces were mostly minted along the north and eastern Mediterranean—from Antioch, Constantinople, Thessalonica, Arles, Lyon, Rome, and Adriatic countries.

The recent hoard falls “in line with other neighboring finds,” the researchers wrote, including the so-called Chapipi Treasure, consisting of 14 gold coins dating from the time of Constantine (who reigned between 306 and 337), which was unearthed in a Grado river valley in the 1930s. Local legends also bespeak of treasure seekers called “ayalgueros” excavating the caves of Asturia “looking for what has been known since the 18th century as the grotto of a barbarian king named Godulfo.”

The newly found late Roman period coins are being cleaned at the Archaeological Museum of Asturias, which plans to carry out further excavations of the site this year. There are still many more to take out, Fanjul believes—besides what one bagger scrounged up during a snow storm.