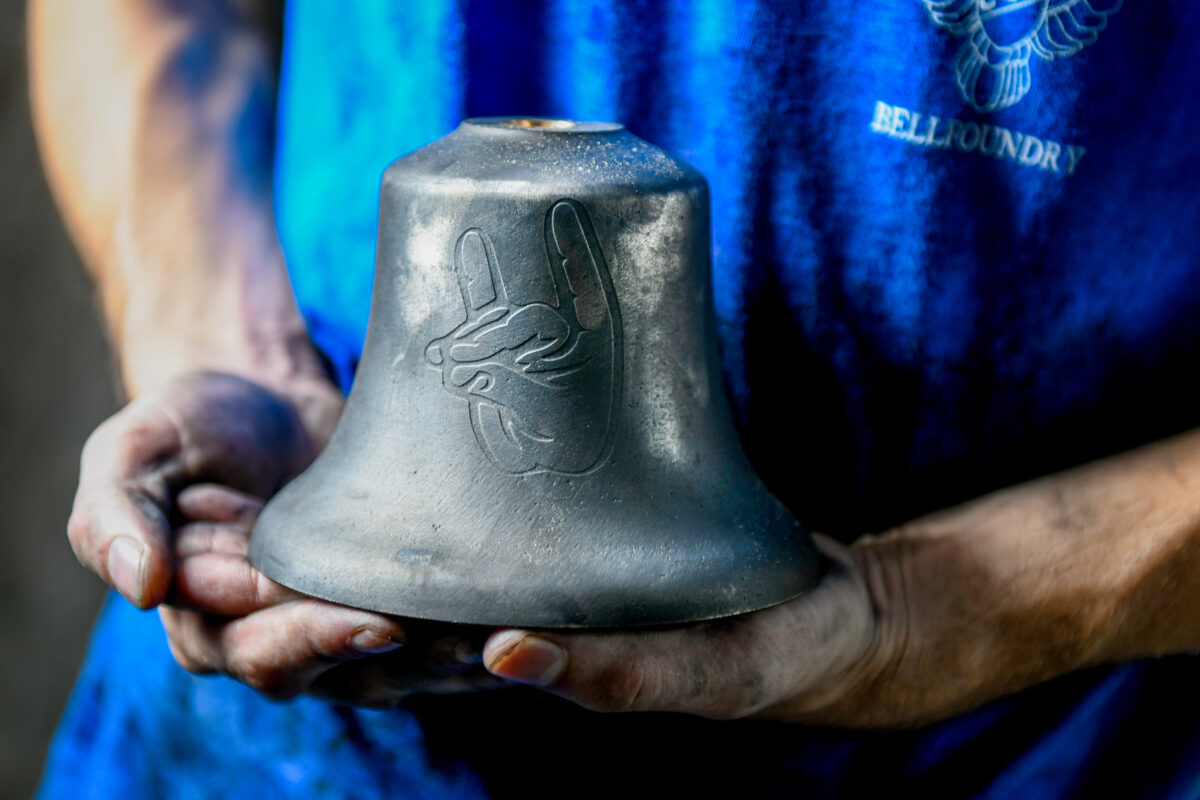 For Whom the Bell Tolls: The Last Traditional Bell Foundry

Benjamin Sunderlin preserves the art of bell-making through operating the only traditional bell foundry in America
BY Krista Thomas TIMEFebruary 1, 2022 PRINT

A bell that tolls rings of timeless tradition. For centuries, peals demonstrated an immortal effort to give glory to God. Funerals, weddings, and church services employ bells, signalling to humanity an aural expression to contemplate all there is, seen and unseen.

However, in Ruther Glen, Virginia, tangible sounds of bells ringing late into the night or early in the morning may not necessarily be directly associated with a church. As the solitary ringer, Benjamin Sunderlin maintains an age-old craft of pitch-perfect carillon and chimes at his foundry.

But that’s not all he does.

Sunderlin, along with his wife Kate, operates the only traditional bell foundry in the United States. Since September 2015, their mission has been to rebuild a dying craft of making traditional bells using time-honored European techniques.

Sunderlin’s obsession with campanology, or the study of bells, took shape when the fine arts major at the Herron School of Art in Indianapolis fell in love with sculpture. “I really liked the labor and the very involved process of taking a pattern, making a mold, casting the mold, and finishing the project,” Sunderlin said. “A professor encouraged me to seek research opportunities to study at bell foundries. I was fortunate enough to receive funding to travel abroad and learn the craft where I started to understand the art and science of campanology.”

Benjamin continued his study at the University of Notre Dame and continued to research in the United Kingdom and France, studying through apprenticeships with foundries that served long-standing clients from a century before. Because they were seeking people to continue the craft, “they took pity on an American boy who wanted to learn how to do this properly.”

Breaking up old bells weighing a ton or more with 20-pound sledge hammers and throwing them into the furnace, Sunderlin synthesized the skills needed to create new bells. The fact that these old bells were made in the 1700s didn’t fall lightly on the young apprentice.

“I was overcome with anxiety and shock to see a 17-year-old British boy destroy a bell made in 1728 by Thomas Lester,” he admitted. It was Thomas Lester who, in 1752, cast America’s first liberty bell. “You shouldn’t worry about preserving an object to preserve the craft. You may need to destroy the object in order to maintain the craft and hand it down to the next generation. This knowledge helps carry on the craft.”

Using centuries-old methods, Sunderlin’s foundry specializes in cast bronze bells using swept loam techniques, an engineered loam made up of sand, clay, horse dung, hair, and reclaimed loam. A mold is made but is destroyed during the casting process. And the process of swept loam, he says, is unique today but was quite common in yesteryear’s foundry industry. Today, it’s primarily the bell founders that preserve these original traditions.

Sunderlin’s affinity for craft resonates with customers from churches, government, and educational institutions. If not casting bronze bells, his company is taking on contracts to manufacture, restore, and tune carillons and chimes. These instruments are struck by clappers at the hand of one person, a carillonneur or chimer.

His most recent proud endeavor found him manufacturing a 55-bell traditional carillon for the memorial bell tower at North Carolina State University in Raleigh, North Carolina.

“We are most proud of the newest instrument in North America, the crown jewel of NCSU,” he beamed. Sunderlin won the bid to create and install the carillon as part of the university’s $7 million restoration project on the original 1919 tower, a memorial dedicated to alumni who died in World War I.

And yet Sunderlin’s expertise also extends to change ringing, or peals. Such is this community-minded instrument, which, Sunderlin says, is a popular British tradition. Compared to 40 installations here in the United States, the British Isles have over 7,000 installations. In fact, almost every church has one. Unlike the chime or carillon which requires only one person, change ringing requires at least six or eight people to handle a diatonic set of bells on a scale and pitched to any major scale. Each person pulls down on a rope that is connected to a bell in the tower. A clapper will slap the bell hard, when rung in sequence, and then together emanates a cascade of sound. The ringing is not the classic melodious tune.

“What you hear sounds somewhat unmusical. It is a challenge for change ringers who are not allowed breaks or visual aids or sheet music to look at. This is a memorized and intuitive and difficult thing to master,” he added.

When asked why bells crack, Sunderlin says on occasion it is actually the result of overzealous ringing. It is also true that bells are susceptible to cracking if produced with a high tin content. This is why an accurate configuration of bell metal, composed of 80% copper and 20% tin, produces the right tonal character and resonance. Bell bronze is not used for any other object—it is an industry-specific recipe.

“Foundry work, or the actual mold and casting, takes a lot of people. But I am the only tuner, which is its own craft. I can count on two hands the number of people who know how to tune carillons. And, with just a few foundries left, it is true that not all of them know how to tune that well.”

Sunderlin says that bells are made to a certain tonal standard that works for their cultural method of bell making and ringing. The work his foundry does includes casting the bells and then tuning the bells.

“Bell tuning is part of the process of making bells. Not all bells need tuning, but chimes or carillons need to be tuned precisely.”

According to Sunderlin, the art of tuning carillon bells can be a long, laborious process. The normal practice is to cast a bell that is thicker and heavier than needed. Bells are then situated upside down in a vertical boring lathe. As the bell rotates on the machine, the tuner makes cuts along the interior of the bell. Depending on where the cut is made, it can affect one of five partial frequencies that make up the sound of the bell. Each bell needs to be tuned in relation to all the others. The challenge of carillon tuning is tuning to each other but locating the frequency in equal temperament in concert pitch.

The couple decided to start a pilot program to learn the craft of foundry and tuning this past summer. Five interns stayed with the Sunderlin family. The program appears to have a promising future as other students have made inquiries based on growing interest in campanology.

Admittedly, Sunderlin calls himself a workaholic. It is his identity and passion being a campanologist.

He credits his work ethic, passion, and commitment for the explosive success of Sunderlin Foundry’s business over the last five years. But just as important is a thriving market where communities are embracing bell culture.

“America is interesting primarily because it is a melting pot of many national identities. Our country does not have a native bell culture, so our interests are broad and admittedly underdeveloped or borrowed from Western Europe traditions,” Sunderlin said.

In American churches, a single bell will call the community to worship or to pray the Angelus.

“You can do a lot religiously with one bell. You can toll it for funerals, or ring it at celebrations, or during feast days or weddings. You can interact in bell culture with that one bell because it is more affordable. And, you can make a bell to fit in most towers. I would say that the single bell is an American phenomenon in that it seems that if they have the architecture like a tower, they will have at least one bell.”

The voice of the church, he feels, resonates through architectural principles and themes. Bells are the projection of the voice of the Almighty out into the external world. Bells compete with white noise and traffic, and they serve to call the community together. If the purpose of the church is to locate and bring people into that space, now, more than ever, he appreciates that bells serve a greater purpose in a fractured society.

“We need real face-to-face community time,” he added, “and it is a challenge in its own right. Bells are that signal or instrument to locate us back to a space or time, helping us participate in our human communities through worship.”

Bells are not essential to life, Sunderlin concedes, “but we like them because they have those qualities that help locate us in a specific space. Whether sacred or secular, bells remind us of our time, our mortality.”

The self-proclaimed professional bell geek recognizes the importance of what makes a great bell—no matter for whom it tolls.