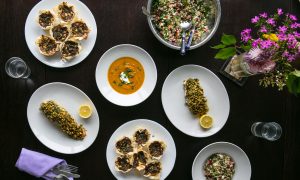 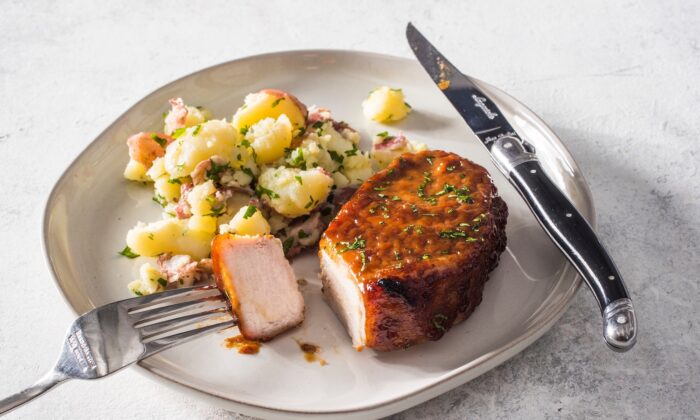 For Tender, Juicy Chops With a Stay-Put Glaze, Take It Slow

On busy weeknights, boneless pork chops make a great centerpiece for a meal. Their mild taste makes them easy to pair with sides, they’re ready to cook straight from the package, and they don’t require hours of cooking to turn tender.

But plain chops can be boring, so we like to gussy them up a bit. This time, we had our sights set on a sweet, tangy glaze that would cling tenaciously to the tops and sides of the juicy chop.

The problem? By the time a glazed chop reaches your plate, its coating ends up everywhere but on the meat.

Many glazes are made with jams, jellies, or preserves, which is a big part of the problem. They’re sugary and offer sheen, but they liquefy when heated. We needed a sweet option that would stay put. Enter apple butter: It’s still sweet, but it’s also packed with apple solids. That means it won’t budge when heated.

The glaze ingredients weren’t the only important consideration, though. The cooking method was equally important. Although pan searing is great for producing a substantial crust on meat, the intense heat causes the proteins on the meat’s surface to contract and squeeze out liquid as it rests. And that liquid dilutes a glaze.

Slow roasting was better: The low, ambient heat cooks the pork gently, so it exudes less liquid during the resting period. We added the glaze in two layers: once before we popped the chops into the oven, and again right before they browned under the broiler. This brought the chops to 140 degrees (the ideal serving temperature) and fused the sweet, tangy lacquer to the meat. It also added a hint of char—a good stand-in for the intense browning produced via pan searing.

You’ll love these tender, juicy chops—especially their picture-perfect glaze. You’ll have time to prepare a side dish while the chops cook, and you’ll even have time to spare to tidy up the kitchen and set the table. Or, better yet, pour a glass of wine and put someone else in charge.

Adjust the oven rack to the middle position and heat the oven to 275 degrees F. Line a rimmed baking sheet with aluminum foil and set a wire rack in the sheet. Spray the rack with vegetable oil spray.

Sprinkle salt evenly over both sides of chops. Place chops on a prepared wire rack and brush 1 teaspoon of glaze on the top and sides of each chop. Roast until meat registers 135 to 137 degrees, 40 to 45 minutes.

Remove the sheet from the oven and heat the broiler. Brush 1 tablespoon of glaze on the top and sides of each chop. Return the sheet to the oven and broil until glaze is bubbly and slightly charred in spots, 3 to 6 minutes. Let rest for 5 minutes. Sprinkle with parsley and serve.

If your broiler has multiple temperature settings, use the highest.

We like the consistency that Musselman’s Apple Butter gives the glaze; if you’re using another brand, you may need to thin the glaze with up to 1 tablespoon of water.