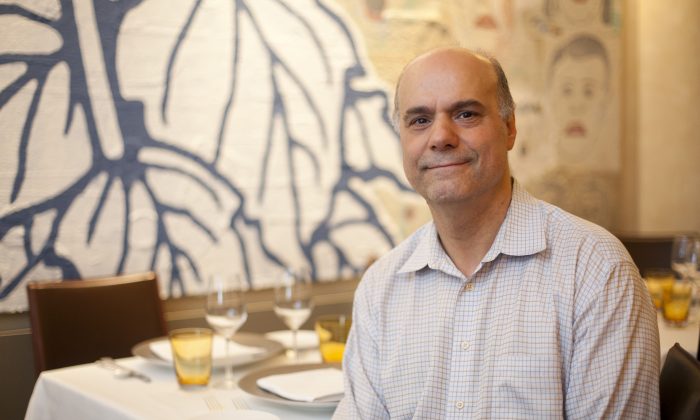 Guiseppe Bruno at Caravaggio on the Upper East Side, one of the three restaurants he and his brothers own. (Samira Bouaou/Epoch Times)
Food & Dining

For Fine Dining, a Hidden World of Hard Work

NEW YORK—When the lights go out at Sistina restaurant, owner and chef Giuseppe Bruno gets into his car and heads to the wholesale markets at Hunts Point.

It’s 3 a.m. and there are barely any cars on the road. The streetlights glow farther and farther apart. Bruno swings his Volvo SUV into each turn deftly, almost on autopilot. This is a trip he’s made more than 100 times in the last year.

Bruno is 53, but looks to be in his forties. He is wearing a gray Villanova hooded sweatshirt over a long sleeve dress shirt.

“After 12 hours of working with customers, this is a good time to spend alone,” he says, sipping from a large cup of coffee, the aroma filling the car.

Bruno and his two brothers have owned Sistina, located on the Upper East Side, for 30 years. He is responsible for the menu, and in the early years he made trips to the meat and fish wholesale markets all the time.

They opened their second restaurant, San Pietro, in Midtown 23 years ago, and a third, Caravaggio, on the Upper East Side in 2010.

Shortly after opening San Pietro in 1990, their business began to generate profits. Bruno stopped going to the wholesale markets and began to rely on distributors for his food supply, a luxury he enjoyed for almost two decades.

Peeled Italian tomatoes went from $14 to $25–$28 a case. Italian pasta went from $35 to $55 per case. Meat, seafood, and produce prices were impacted significantly.

The profitability of a restaurant is intricately connected to the state of the economy. Fluctuations in consumer spending, foreign exchange rates, and the cost of food, among other factors can immediately impact their bottom lines.

The scale of the economic downturn in 2008 was unmatched since the Great Depression. Full service restaurants like Sistina and San Pietro have a profit margin of no more than 3.5 percent, according to the National Restaurant Association. The falling revenues and the increased cost of food dealt a deadly blow to many restaurants. Those that survived had to adapt.

“The restaurant industry was a low profit industry before the recession,” Andrew Rigie, executive director of the New York City Hospitality Alliance, said. “After the recession they really had to look at and analyze their food cost, their labor cost, and learn how to control those, because every penny really counts.”

For many restaurant owners, adapting meant working more and making less money. Among other things, for Bruno this meant cutting out the food distributors and going to the wholesale markets himself.

Bruno pays at the gate of the market and cuts through lanes of parked trucks to his spot in the back of the lot. He didn’t need to tell us which market, as soon as the car doors swing open the smell of seafood amplified by the summer heat and humidity is surprisingly strong.

The parking lot at the New Fulton Fish Market is lined with hundreds of trucks stretching almost out of sight. Trucks from all over the state and the country come for the seafood here, with an average of 2 million pounds sold every day. That’s equivalent to about 133 African elephants a day.

Inside the market, which is a 400,000-square-foot state-of-the-art refrigerator, Bruno pushes through the thick strips of the plastic curtain and the cold descends, making the fish aroma subdued and pleasant.

Immediately, we have to dodge the weaving car lifts and hand trucks. But no need to fear, the men here are precision workers with wit as sharp as the knives they wield. The entire floor is a beehive of activity. People, waxed cartons, car lifts, hand trucks, fish hooks, and knives whirl about with electric and unceasing precision.

Over the past year, Bruno has become an expert at shopping for seafood at the market. He can tell a superior piece of tuna from an average one by slight differences in color. “This fish was stressed out,” he said, pointing to a darker tuna filet.

Returning to the market enables Bruno to bring better ingredients to his restaurants, while saving money. He cut 35 percent off his seafood costs after a few weeks of going to the market.

But after a year of coming to the market every other day, Bruno, is beginning the feel the weight of 18-hour workdays.

Chef Jesus Martinez, owner of Alcala restaurant, has been going to the Fulton Fish Market almost every day for 28 years—first on Fulton St. in downtown Manhattan, and then at Hunts Point when the market moved.

Sitting at a small table near the exit of his East Midtown restaurant, Martinez said he has also experienced a reduction in revenue since the recession hit.

The most challenging part has been predicting how many people will come in on any given day. Before the recession, he could bet on 70–90 people sitting down at his restaurant every day. Now that number swings between 20 and 70, making it difficult to purchase fish, meat, and produce in the right quantities. If only 20 people show up, food will inevitably go to waste.

As the profit margin began to shrink during the recession, Martinez used the senses he developed after 35 years of running a restaurant to adapt. He said he judges how much food to purchase depending on the weather. “I expect more people when it’s not too humid and when the weather is nice. When it’s raining or humid people want to stay inside.”

Martinez said profits were never a determining factor for him—the work is his passion and he will continue regardless. He got up several times in the course of half an hour to bid his customers farewell, shaking their hands as they left the restaurant. A teal silk tie peaked proudly from under his chef’s coat, accenting a kind, round face and intent, light eyes.

“The only thing that changed is that you begin to worry, and that’s not good,” he said. “When you worry about whether you are going to make it to the end of the month, you can’t concentrate on being creative.”

“Our profit margin has gone down,” Walia said, describing the drop as “pretty significant.”

Tamarind is known for its quality and has been listed among the best Indian restaurants in New York City for several years. When food prices climbed, Walia was determined not to sacrifice quality.

“If today you are serving A-class tomatoes and tomorrow B-class tomatoes, you are hurting yourself. The guest will not enjoy your dish,” Walia said. “When you are a fine dining restaurant, you cannot cut corners.”

Sales remained steady at Walia’s two restaurants when the recession hit and recently began to climb.

A five-minute drive from the New Fulton Fish Market is a stretch of refrigerated warehouses that house the city’s meat distributors. Bruno buys his meats from Master Purveyors here, the wholesaler used by Smith and Wollensky and Peter Luger, New York’s iconic steakhouses. Bruno said the owners, Sam Solasz and his sons Mark and Scott, were very helpful from the beginning.

Bruno’s determination to maintain quality at all cost becomes clear here. Mark Solasz swings open the door to a dry aging room. The air has a milky scent blasted around by large fans. Solasz said that Master Purveyors is the only New York company that gets its meat unboxed and pays 10 percent more for its product to ensure that the gene pool of the animals is not compromised. As a result, Solasz said that their steaks win almost every taste contest.

As we walk through the aging, processing, and refrigeration rooms, Solasz continues to show us Mater Purveyors’ uncompromising approach to quality. Meanwhile, Bruno grows quiet and trails off several times beholding with wonder the magnificent pieces of meat—a sign of a man devoted to serving exceptional food.

One can’t help but notice the beautiful bouquets of flowers at Caravaggio. Bruno used to spend $2,000 to $3,000 a week for someone else to take care of the flowers in all three of his restaurants. Since the recession, he selects them and arranges them himself, spending only around $500 a week.

The luxury of fine dining restaurants may lead one to believe their owners are leading comfortable lives. But behind the scenes, many restaurant owners struggle to provide the same quality of service under continuing economic pressure.

Bruno, Martinez, and Walia, all hold their customers’ tastes in high regard. Though they were impacted by the recession to different extents, their determination to maintain quality is adamantine.

“My customers eat at the best restaurants in the city,” Bruno said, adding that Yoko Ono is a regular and the likes of Robert De Niro have dined at his restaurants. “They are educated and they’ll be able to tell the difference.”

Despite the restaurant owners’ worries, a bright future is ahead for the industry, according to Robert Seixas, director of education at the International Culinary Center. Seixas said that 2008 and 2009 were traumatic years for the industry with many restaurants folding in the face of economic pressure.

Those that remained have had to look hard at their costs and adjust, Seixas said.

For restaurant owners that have had to take on more work, “It goes back to cutting costs,” Seixas said. “In a way, if you’re an owner it’s even better to do it yourself.”

The food industry has 500,000 more jobs nationwide today than it did prior to the recession and continues steady growth, outpaced only by the health industry.