The Denial of Evil: The Case of Communism
0
Share Now
TelegramFacebookTweetEmailTellMeWeReddit
Copy Link 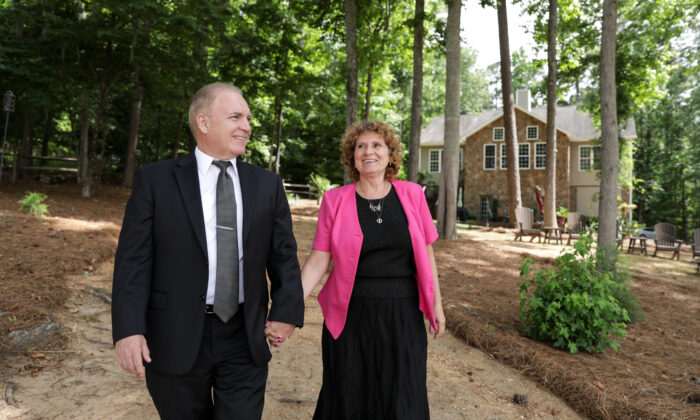 For Family and Freedom

A 30-year-old Tiberiu Czentye risked his life to escape communist Romania, hoping to find a brighter future for his children. Decades later, with his grandchildren in mind, he's telling his story and hoping it will help stem the tide of socialism
By Catherine Yang

Parting from his wife and two sons was the hardest thing Tiberiu Czentye had ever done—harder than the upcoming 40-mile trek that would end with him crawling on the ground as he tried to evade armed guards near the Romanian–Yugoslavian border, harder than what would be months of hard labor in a Yugoslavian prison after he was captured anyway, and harder than the two years he would spend as either prisoner or refugee while crossing five countries before he finally won his freedom. “Family—that is why I left; I escaped Romania for the future of my kids,” Czentye said. “The biggest, toughest, most painful moment of my life was when I turned off the lights and kissed my kids and my wife goodbye, because I did not know if I would ever see them again.”

Even now, from the safety of his own home in a free country, when he speaks of it—when he remembers those goodbyes—he’s moved to tears. Czentye and his family lived in communist Romania, during the regime of Nicolae Ceausescu. From the beginning of this plan, he was clear about his goal: America. There, his family would have freedom and the opportunity for a better life and future for generations to come. “I studied. Many people leave and they don’t know what they’re doing or why,” he said. “If I make this sacrifice, at least I want to leave my family in one safe place for many generations. So I studied: the population of the US, the economy, the states, the two parties, the political power, the military power, the power of the dollar and how strong is the economy, and all these things put together.”

America’s history as a country built by immigrants was crucial for Czentye. He was migrating for his sons’ futures, and he didn’t want to bring them all the way to a new country where they would be looked down upon—and that didn’t happen in America. “I bring them here for their futures, and to feel good, not to be hurt,” he said. “I had a very strong reason to risk my life.”

He knew he was risking his family’s future as well, but he had a strong feeling that he would make it—throughout his journey, he said he must have been blessed. Man alone can only do so much, he said, but perhaps God played a part too.

The Value of Human Dignity

Circumstances were bleak under Communist Party rule in 1989 socialist Romania, when Czentye set out on his mission to escape: schools were brainwashing centers, hard work was penalized, and his sons’ futures were almost certainly shaping up to be worse than his own. But Romanians didn’t always equate socialism with dictatorship—many people in the world still don’t. First, came the promises of free stuff, allowing socialism to take hold, Czentye said.

However, once the Communist Party had power, it quickly became clear that it couldn’t keep its promises. Then, the regime closed the borders, morphed into a dictatorship, and its unrealistic goals ended up impoverishing the nation. “Under these restrictions and these political things, there started to be a shortage of food, shortage of gas—shortage of almost everything,” Czentye said. “People were dying.”

That hit too close to home when his younger son got sick and ended up severely dehydrated. At the hospital, Czentye learned of a treatment for the virus, three daily doses of which could help his son to recover. But the medicine was produced outside of Romanian borders, and the regime refused to buy foreign pharmaceuticals. Upset, Czentye checked his son out of the hospital, despite widespread accusations that he was sentencing his boy to death. Instead, he hired a nurse and purchased the medicine on the black market—and his son got better. His enterprising spirit was clearly at odds with socialist culture.

People in Romania had three options, he said: they could work hard and do their best while remaining unable to distinguish themselves or see the fruits of their labors, they could become lazy and collect the same pay as everyone else, or they could get out. The material side of things was only one concern.

Communist schooling, from kindergarten through college, focuses on brainwashing students while glorifying the Communist Party, Czentye explained. History is rewritten, all the media is state-run, private property disappears, and your movements are monitored and restricted. “Once they have power, they tell you what to do and how to do it,” he said. But there are always people like him, Czentye noted—people who want to make their own way and show their own worth.

In order for the regime to keep up its ruse, it doesn’t stop with lies and brainwashing. The secret police turn neighbors into informants, in a country where no one is allowed to criticize the party. “If somebody, just one neighbor, tells them, ‘Well, Tibi said that …’ in the morning they break down the door, take you from there, and you just disappear forever,” he said. That’s the worst part, he said: first, people turn on each other, society loses trust and faith in fellow humans, and people lose their dignity.

“People start to give you up. It starts to lose the quality and the value of the human being. I don’t want to say it because it’s not so fair, but they start to be more [like] animals, and just bend to the power.”

In contrast, family values were deeply ingrained for Czentye—growing up, he witnessed commitment between his grandparents and between his parents. As such, he didn’t just want a nicer life for himself: He wanted a future where his sons could flourish. Like his parents and grandparents had done before him, he wanted to lead by example and live out values worth imitating.

“That is why I left home, and left by myself. They have guns on the border and they used to shoot people—they don’t allow you to leave. I thought, ‘Please, they kill me, but they don’t kill my family,’” he said. From Czentye’s home in Timisoara, Romania, he crossed the border into Yugoslavia, where he was caught and sentenced to what amounted to slave labor, digging holes for electrical cables. After three months, he made his escape, traveling through Austria, through West Germany, and to the Netherlands, where he was placed in a refugee camp.

While in the Netherlands, Czentye sought political asylum in the United States and petitioned Romania to let his family visit him. The timing was fortunate—the regime had been overthrown and a new government was working to establish its legitimacy—and Czentye’s petition was granted. Being reunited with his family was unforgettable. He still remembers his trip to the airport, the suspense, and the first moment when he saw his family’s faces. With tears of joy streaming down his cheeks, Czentye was finally able to hug his loved ones again. It took a total of two years for Czentye to gain asylum, and in 1991, he moved to the United States.

“I had two luggages, two kids, my wife, and God,” Czentye said. He landed in Portland, Maine, where his family was entitled to a year of government assistance. After three weeks, he turned it down, and the family packed up and hopped on a Greyhound headed across the country. They had their eyes set on San Francisco, a hub of opportunity and industry.

In San Francisco, Czentye worked three jobs at once, taking neither vacation nor sick leave for five full years before starting his own business. But things in California—and many parts of America—have changed since then, he said. From 2007 to 2009, Czentye would spend time traveling up and down the Southeast, looking for a new place for his family. He found it in South Carolina, and after his youngest son graduated from college—both sons studied in California, one at UCLA and the other at Menlo College—they made the move cross-country. Still, even after seeing changes firsthand in California, Czentye was appalled when socialism became a popular movement in the United States.

“I was shocked. Shocked! And very upset,” said Czentye, who today is CEO of a digital archiving company and a happy grandfather of five. “I really believe it is my duty to share my story and tell these crazy guys who like socialism that it’s not like that.” Inspired to do more, he got involved in local politics and was recently elected executive committeeman for his county, and is looking for more opportunities to share the truth still.

However, Czentye acknowledges that it’s not all these young people’s faults that they’re endorsing socialism; rather, their parents may have failed them by not teaching them to mind their character. The schools may have also failed them by pushing them toward expensive degrees in oversaturated industries, racking up loans they now struggle to pay off. Even before Czentye set foot in America, he studied the culture, and from day one his wife and he were clear with their sons: Parents are the foremost teachers in life. Police and schoolteachers have roles to play as well, but those should never supersede parental guidance. He spoke openly about socialism, communism, what happened in Romania, and the follies of human nature.

Czentye and his wife wanted to give their boys good lives, and they made clear their expectations: that the boys should use the good manners they were taught and strive for excellence—and they did, doing well in school and sports. Their sons are now raising their own families with these same traditional values. But Czentye saw that many of his sons’ friends in grade school weren’t brought up this way; without good values, a person’s character can slip, laziness creeps in, and the mentality of blaming others provides an easy out. These resentful souls take readily to socialism and its promise of free things, he warned.

A second warning sign, a tactic reminiscent of what Czentye experienced in Romania, is the divisive culture attempting to take hold in America. “The socialists, they work very hard to divide us: to divide us by nationalities, to divide us by blue-collar workers [versus] white-collar workers, if you are a member of a political party—all of these things,” he said. But Czentye believes that truth will prevail, and if people can recognize socialism for what it is, America can stay free.

“I’ve had the chance to go [traveling] in many countries since I’m here, and since I had my company, I went back to Europe, I was in South America, I was in China, I was in Africa, [and] Japan. I can tell you, America is not perfect, but it is the best,” he said. “And from here, I’m not going to run anymore. I’m going to fight and do what I can against socialism and for a free society.”