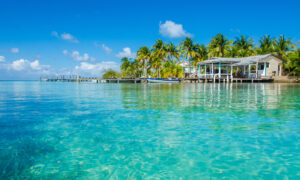 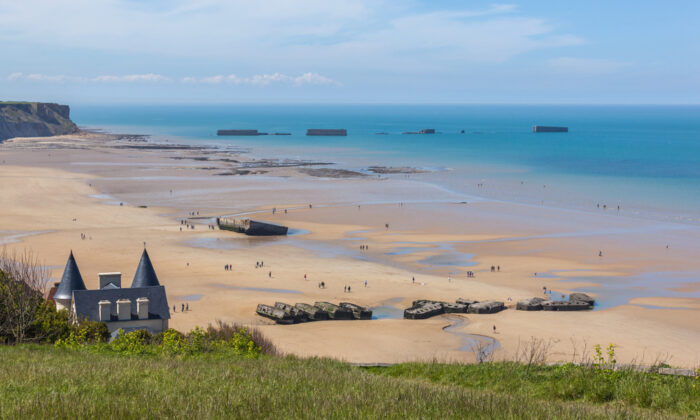 Arromanches-les-Bains beach with the remains of the Mulberry harbor in Normandy, France. (Shandarov Arkadii/Shutterstock)
Destinations

Following the Paths of D-Day in Normandy

Today, it’s a sleepy town not far from the sea, but in the wee, pre-dawn hours of the morning on June 6, 1944, Sainte-Mère-Eglise was wide awake. Fires and the repeating gunshots from automatic weapons lit up the skies. Allied paratroopers dropped from above, many paying a heavy price, descending into this burning hell to secure the primary road connecting the nearby landing beaches with the rest of France.

Famously, one soldier, John Steele, became suspended, hanging from the big, stone church in the heart of town, his parachute wrapped around the spire, as the bells rang out—an event depicted dramatically in the film, “The Longest Day.”

Walking into the main square on my visit here, I saw that he was still there, or at least a representation of Steele, in mannequin form, hanging from the side of the church, his legs dangling, his parachute still engaged. Seventy-seven years ago, Sainte-Mère-Eglise became the first town liberated on D-Day. You can still feel the legacy of those landings all across the coast here in Normandy, and on two separate visits, I experienced that history, a landscape sacred and scarred, and stunning.

My exploration began, as it should, on Omaha Beach. Instantly recognizable as a much-photographed, often-filmed icon of World War II, it still overwhelms. Stretching five miles along the English Channel, this was a central focal point of Operation Overlord, which poured 156,000 U.S., British, and Canadian troops onto five separate beachheads in a single day. They faced the Atlantic Wall—a series of German bunkers, pillboxes, machine-gun nests, and other fortifications, reinforced by land mines and barbed wire. Punching through the first breach, Overlord opened a western front to the war, one that would march across Western Europe to meet Soviet troops coming from Russia in the east.

But the losses at Omaha were immense. The seas were heavy that morning. Landing craft were sometimes hung up on sandbars, leaving soldiers hundreds of feet from shore. Germans fired down from a steep line of bluffs, secure behind their battlements. On the beach, confusion reigned, with companies swept past their landing sites by a strong tide. Foot soldiers had to fight through water that often rose up to their waists, a hail of bullets raining down from above.

A dramatic conflict within the larger battle happened at Pointe du Hoc, a triangular promontory comprised of sheer cliffs jutting into the ocean, just to the west. Here, the Germans had positioned cannons capable of firing 15 miles—to both Omaha and Utah Beaches. A small force of Army Rangers brazenly fought to the top, climbing up rope ladders, taking this key position. Of 225 who began this mission, only 95 were fit to keep fighting afterward.

At Omaha, waves of reinforcements pushed back their adversaries, as afternoon faded to evening, capturing positions and moving the Germans back from the beach. But by day’s end, the Allies had suffered 2,400 casualties (with another 1,200 on the German side), and today, nearly 9,400 soldiers are buried here at the Normandy American Cemetery, with another 1,600 listed on the Walls of the Missing. Lush and green, the white grave markers stretch to the horizon in every direction, the beauty of the place contrasting with the melancholy of its meaning and history.

That’s true all across this stretch of Normandy’s coastline. Driving down quiet, winding roads, the seaside here seduces, drawing you into a reverie that’s only broken when you reach a roundabout, say, with a big, green tank set atop it. A walk through the sand dunes might finish at a memorial to the fallen. The beaches stretch endlessly in both directions, the cobalt Channel rippling with waves, and it’s hard to imagine that on D-Day, almost 7,000 warships plied these waters.

A perfect example of this juxtaposition: Arromanches-les-Bains, the windswept home of about 9,000, set atop a seawall amid a crescent of picturesque bluffs. At first glance, it’s just a charming French seaside town. Hotels and stores selling knick-knacks and ice cream shops line pedestrian streets. Bistros serve up moules frites (mussels and fries) and joue de boeuf (beef cheek cooked over two days with carrots, onions, and apples), the rich, evocative scents wafting out into the street, enticing you to wander, and sample, all day long.

Around one corner, a mural of two small children, writing: “Please no more war … Love.” And just off that seawall, a temporary harbor once unloaded the materiel that fueled the Western Front, thousands of tons arriving every day. But like everything with Operation Overlord, it wasn’t easy. While the Allies locked down a secure stretch of coast on D-Day, none of that included a large port city like Le Havre or Cherbourg, places, at the time, still occupied by the Germans.

So the British built their own, known as Mulberry Harbor. Constructed in two sections (the other one was located close to Omaha Beach), ships carried the prefabricated pieces over the Channel. Workers assembled about six miles of floating roadways (with the code-name, Whales) set on buoyant steel and concrete pontoons (called Beetles), protected by rows of scuttled ships (Gooseberries) and other breakwaters. When its twin at Omaha was destroyed by a violent storm, this placed additional pressure on the facilities at Arromanches. In just over three months, millions of soldiers and supplies passed through, and, a testament to its strength, pieces of the harbor are still visible from the seawall in town.

After a visit to the excellent D-Day museum in town (which includes a detailed model of Mulberry), I continued across the region, visiting Utah Beach and Juno Beach. At the latter, Canadian soldiers and sailors, supported by French free fighters and Norwegians, pushed through bad weather and heavy resistance to push back the German line, linking up with the British, who had taken nearby Gold Beach. At Pegasus Bridge, panels told a dramatic story. Since it was one of only two links between the major city of Caen and the coast, capturing these spans was the very first D-Day objective. In Operation Deadstick, 30 airborne soldiers descended in six gliders, securing both Ranville and Benouville Bridges—with Benouville renamed for the emblem of the British Parachute Regiment.

After a side trip to see the Bayeux Tapestry (which is completely unrelated to D-Day, but worth a visit—dating back to the 11th century, it tells the story of the Norman conquest of England in 1066 along 230 feet of cloth), I continue down the coast. More beaches to walk, villages to visit, the rise of Le Mont Saint Michel—the path to its entrance ebbing and flowing with the tide—just beyond. Plenty more to explore, here in Normandy.