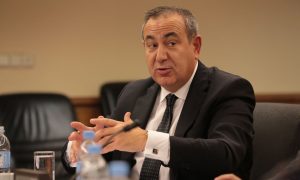 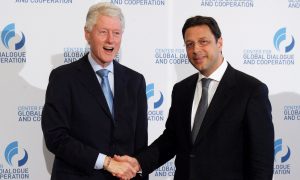 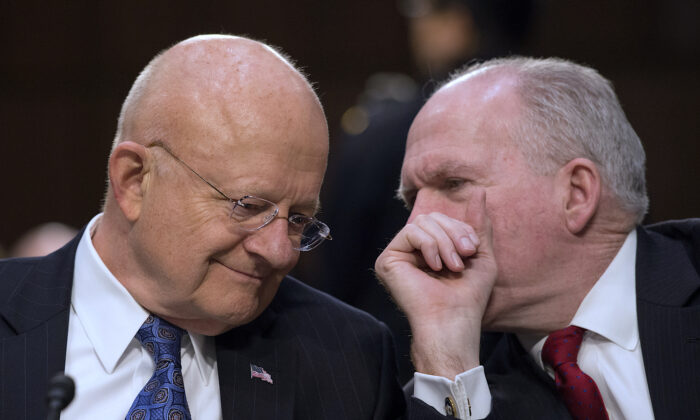 John Durham, the U.S. attorney tasked with investigating the origins of the FBI’s counterintelligence investigation into the Trump campaign in 2016, is expected to seek an interview with former CIA Director John Brennan and former Director of National Intelligence James Clapper, following an expansion of his investigation.

It was reportedly the meetings that Durham and Attorney General William Barr recently had in Rome—where they obtained new evidence—that were the impetus for the broadening of the scope of the probe.

According to Fox News’ Catherine Herridge, her sources told her that Durham is now “very interested to question” Brennan and Clapper.

According to Herridge, the meetings “took place on Aug. 15 and Sept. 27, 2019, in Rome,” and it was during one or both of these trips that Barr and Durham “gathered new evidence.”

The news comes following months of speculation about whether the former top Obama officials would be questioned over their involvement in the investigation and spying on the Trump campaign.

It was recently revealed in a court motion by the lawyer for former national security adviser Michael Flynn that the Justice Department (DOJ) had obtained two cell phones belonging to Joseph Mifsud, a Maltese professor who has been cited as playing a key role in the FBI’s determination to open its probe of the Trump campaign.

Earlier this month, on Oct. 5, Politico reported that Durham had “not requested interviews with any of the FBI or DOJ employees who were directly involved in, or knew about, the opening of the Russia investigation in 2016, according to people familiar with the matter.”

However, according to an Oct. 19 New York Times article, Durham has already interviewed “about two dozen former and current F.B.I. officials” and that the “number of interviews shows that Mr. Durham’s review is further along than previously known.” The paper also reported that Durham’s efforts were being aided by “two former senior F.B.I. agents” who were assisting with the review.

One of the former FBI officials assisting Durham’s investigation is reported to be John C. Eckenrode, who, at one time, worked with Patrick J. Fitzgerald in the 2003 Valerie Plame leak case. Eckenrode reportedly knew Durham from his time as an FBI agent in Connecticut, where Durham was a prosecutor. Eckenrode also “ran the FBI’s office in Philadelphia” prior to his 2006 retirement from the bureau.

In addition to the dozens of FBI interviews, Durham’s investigative team has also reportedly “questioned officials in the Office of the Director of National Intelligence,” although Clapper doesn’t appear to have been among those interviewed. Nor have Durham or his team yet questioned or interviewed CIA personnel.

The number of interviews conducted as well as the widening scope suggests that Durham has been gathering all available facts, evidence, and data prior to approaching the central figures in his inquiry.

More recently, on Oct. 19, NBC News reported that Durham “has expressed his intent to interview a number of current and former intelligence officials involved in examining Russia’s effort to interfere in the 2016 presidential election, including former CIA Director John Brennan and former Director of National Intelligence James Clapper.”

The outlet also reported that Durham “has also requested to talk to CIA analysts involved in the intelligence assessment of Russia’s activities, prompting some of them to hire lawyers.”

According to the article, “Justice Department officials have said that Durham has found something significant, and that critics should be careful.”

Additionally, NBC News noted that “although the probe did not begin as a criminal investigation, Justice Department officials won’t comment on whether it has morphed into one.”

Brennan himself also told MSNBC—where he is a paid commentator—earlier this month, that “I’m supposedly going to be interviewed by Mr. Durham as part of this non-investigation.”

Meanwhile, Fox News reported that “based on what he has been finding, Durham has expanded his investigation” and has gone through the process of “adding agents and resources.” Additionally, Fox reported that the “timeline has grown from the beginning of the [counterintelligence] probe through the election and now has included a post-election timeline through the spring of 2017, up to when Robert Mueller was named special counsel.”

Sometime in mid-2016, Brennan formed an interagency task force headquartered at the CIA to investigate foreign intelligence allegations against the Trump campaign. Brennan appeared to describe the task force formation during an Aug. 17, 2018, interview with MSNBC’s Rachel Maddow:

Rachel Maddow: “So, it’s an intelligence-sharing operation between…”

John Brennan: “Right. We put together a Fusion Center at CIA that brought [National Security Agency] and FBI officers together with CIA to make sure that those proverbial dots would be connected.”

Additionally, Brennan and some of his CIA analysts, along with Clapper, were responsible for a series of three reports that were used to promote the Trump–Russia collusion story. The first report was released on Oct. 7, 2016, and the second on Dec. 29, 2016.

The report played a key role in advancing the now disproven allegation that Trump colluded with Russia.

While Brennan denied before Congress that the Steele dossier was used in the ICA, he did attach a two-page summary of the dossier to the ICA that he, along with Clapper and Comey, delivered to then-President Barack Obama on Jan. 6, 2017.

Notably, Adm. Mike Rogers, then head of the National Security Agency, publicly dissented from the findings of the ICA, assigning it only a moderate confidence level, and later told Congress that the report “didn’t have the same level of sourcing and the same level of multiple sources.”

Use of Unofficial Foreign Intelligence

Brennan also made repeated use of questionable foreign intelligence and passed it along to the FBI.

Brennan testified to Congress in May 2017 that any information, specifically “anything involving the individuals involved in the Trump campaign was shared with the bureau [FBI].” Brennan also admitted that it was his intelligence that helped establish the FBI investigation:

“I was aware of intelligence and information about contacts between Russian officials and U.S. persons that raised concerns in my mind about whether or not those individuals were cooperating with the Russians, either in a witting or unwitting fashion, and it served as the basis for the FBI investigation to determine whether such collusion [or] cooperation occurred.”

Sen. Dianne Feinstein (D-Calif.): “Over the spring of 2016, multiple European allies passed on additional information to the United States about contacts between the Trump campaign and Russians. Is this accurate?”

But there’s a significant problem with Brennan’s ongoing transfer of foreign intelligence leading up to the FBI’s initiation of its counterintelligence investigation into the Trump campaign on July 31, 2016.

This view has been backed up by former Rep. Trey Gowdy who, while discussing both Brennan and former FBI Director James Comey, noted: “It’s going to be interesting if they begin to turn on one another. I’ve seen the document. I’m not going to describe it any more than that. Comey’s got a better argument than Brennan, based on what I have seen.”

Use of Reverse Targeting

In addition to his use of unofficial foreign intelligence, Brennan appeared to have employed the use of “reverse targeting” on members of the Trump campaign. Reverse targeting refers to the targeting of a foreign individual with the intent of capturing data on a U.S. citizen. During the Aug. 17, 2018, interview with MSNBC’s Maddow, Brennan said the following:

“We call it incidental collection in terms of CIA’s foreign intelligence collection authorities. Any time we would incidentally collect information on a U.S. person, we would hand that over to the FBI because they have the legal authority to do it. We would not pursue that type of investigative, you know, sort of leads. We would give it to the FBI. So, we were picking things up that was of great relevance to the FBI, and we wanted to make sure that they were there—so they could piece it together with whatever they were collecting domestically here.”

However, under the laws governing U.S. surveillance, the identities of U.S. citizens are supposed to be protected. Provisions known as minimization procedures are intended to protect information “incidentally collected” on U.S. citizens in the course of foreign surveillance.

More importantly, the collection described by Brennan doesn’t appear to have been incidental but rather targeted.

As this foreign intelligence, unofficial in nature and outside of traditional channels, was gathered on members of the Trump campaign, Brennan began his process of feeding this intelligence to the FBI. Repeated transfers of foreign intelligence from the CIA director helped push the FBI toward establishing a formal counterintelligence investigation.

These actions by Brennan may be precisely why both Barr and Durham are focused on the events leading up to the FBI’s initiation of their investigation into the Trump campaign.

Even so, Durham has reportedly been in contact with Horowitz, whose investigation had “grown to include more than 2,800 subpoenas, nearly 500 search warrants, 13 requests to foreign governments for evidence and interviews of about 500 witnesses,” according to the Washington Examiner. The IG’s investigative efforts have likely served to assist Durham with the direction and scope of his ongoing investigation.

As Barr noted during a May 2019 interview with CBS News: “I had a lot of questions about what was going on. I assumed I’d get answers when I went in and I have not gotten answers that are satisfactory, and in fact, probably have more questions, and that some of the facts that I’ve learned don’t hang together with the official explanations of what happened.”