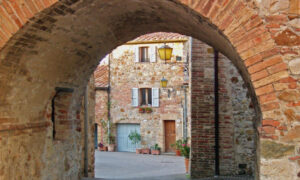 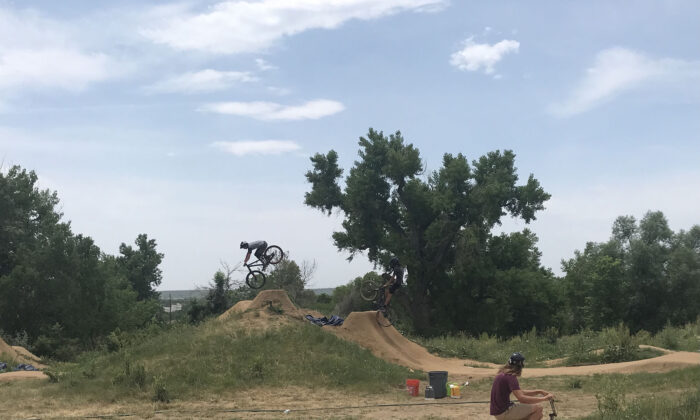 An intrepid biker leaps into the sky at the Valmont Bike Park in Boulder, Colo. (Courtesy of Lesley Sauls Frederikson)
Destinations

My startled husband yanked our rental car to the side of the road. Lucky for me, he has a good sense of humor and was able to understand my urgency when I explained that I thought I had just seen a bicycle fly through the air. A quick reverse up the block and we found ourselves pulling into Valmont Bike Park, where BMX bikers were, indeed, leaping off jumps and soaring through the air.

We walked into the park and settled on a stand of metal bleachers. From that vantage point, we could see a pack of helmeted BMX riders cued up at the top of a nearby hill, ready to test their will and technique on dirt hills made for leaping and jumping. I held my breath with each launch as riders careened down hills, jumped into the air, and landed on unimaginably steep slopes where they gained speed to fling themselves aloft only seconds later. It seemed there were any number of tracks from which they could plot their dangerous courses, and we were glued to our seats as if we were at a professional show.

This wasn’t the kind of entertainment we had anticipated on our trip to Boulder, but it was an exciting way to pass an hour or so off the beaten trail. The 42-acre park maintains a small playground and bathroom along with the dirt jump trails we had found. There are also slalom trails, sand pits, pump parks, and other dirt trails for bikers to enjoy. On further investigation, we found a dog park and picnic pavilion in another part of the property.

It wasn’t our only local surprise. I had found the Shelby American Collection museum in the outskirts of Boulder on the internet, and my husband’s beaming response when I mentioned it meant we were going to visit for sure.

We wound around unfamiliar roads and ended up in an industrial park, where a nondescript office building belied the treasures within. I was hesitant at first but soon realized we were in a very special place with reverent motorsport fans who moved slowly from display to display soaking it all up. Fortunately, I had seen and very much enjoyed the movie “Ford vs. Ferrari,” and in this building, it came to life.

Carroll Shelby was a visionary in auto racing who worked with exceptional drivers and mechanics to squeeze the fastest speeds out of whatever race car he was running. It was his determination, along with the skill of driver Ken Miles, that brought Ford to the world stage in auto racing, and from that relationship eventually came Ford’s muscle cars that could rival any on the road.

“The guy did it on a shoestring,” my racing-fan husband said in awe. “He begged, borrowed, and stole to make it happen, and he beat the most competitive race team out there. This is the history of American racing.”

The Shelby American Collection has gathered the cars that made it all happen, along with racing memorabilia, photographs, and detailed histories of each car in residence. While it was helpful for me to have seen and enjoyed the film, there was plenty of information packed into this relatively small space to inform and entertain even the most casual auto enthusiasts and their families.

Even farther off the beaten path in Boulder is a place I wouldn’t normally prioritize when on vacation—a hardware store. But this one was like no other I had seen. It’s called McGuckin, and my hat is off to them for having a better variety than any big-box store with the addition of personal attention and a small neighborhood atmosphere. It reminded me of the hardware store where my grandfather once worked, and I found it to be delightful.

I’d overheard a young woman telling her parents about this amazing hardware store where she got everything she needed as a college student and new homeowner, so I wanted to check it out. With entrances on multiple sides of the building, McGuckin is truly easy to access. Once inside, I intentionally got lost in the meandering but extremely well-organized aisles. Household cleaners gave way to rain jackets and auto supplies. I met several leashed dogs wandering with their owners, and I was tickled to see a cat being toted around in a mesh backpack.

It was the small things, though, that made this store worth wandering. I found a plastic pizza on the grilling aisle, a clear glass cat nightlight with two glass goldfish in her belly, and a fuzzy stuffed animal that, once microwaved, will warm chilly hands. Paper lanterns hung over sample pop-up tents, and friendly people in most aisles offered knowledgeable assistance. The store even has its own merchandising, such as McGuckin mugs and shirts.

Of course, we enjoyed the bustle of the Pearl Street Mall, savored the flavors of local microbreweries, and soaked up expansive views from several peaks overlooking the city, but a hardware store? It hadn’t exactly been high up on the Boulder bucket list, but it will be the next time I come back.