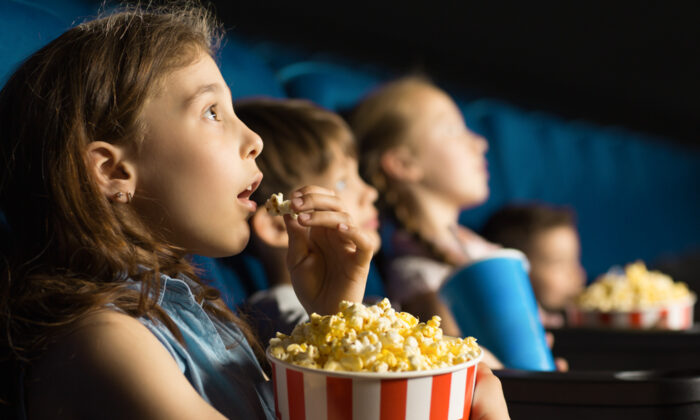 Flickering Flames: The Primordial Power of the Movies

Picture a cave with a fire burning just outside its mouth. Prehistoric men, women, and children are seated on the cave floor, every face alit with awe and wonder, under the spell of a master storyteller. Before them, an elder, dressed in animal skins and a headdress with antlers stands near the flames, gesturing and talking. He’s retelling the story of a recent hunt. The fact that everyone already knows how it ends doesn’t spoil it; if anything, it enhances it. It’s all there: the suspense of the stalk, the rush and fury of the kill, the sustaining power of life-giving flesh, gained at the cost of animal life, and perhaps the life of one of their own. One of their number, moved by the power of the imagery, illustrates the story on the cave wall, trying to hold onto some of the magic lest it be forgotten.

This scene from a “movie”—one made countless millennia before our current form of movies was invented, and replayed countless millions of times throughout those lost eons, is so deeply ingrained in our collective consciousness that we aren’t even aware of it. Yet many of us moderns have had similar experiences in our youth: sitting cross-legged with siblings or friends around a campfire, parents or counselors telling stories by the magical light, sparks rising to the stars, our imaginations transfixed and painting the pictures of the story on the cave walls of our minds.

Mankind’s need for storytelling is timeless and universal. Stories connect us with myths and legends, tradition and history; they tell us truths about ourselves and where we come from, and give us common ground with our fellow man. By sharing triumph and tragedy, love and hate, fear and courage, sadness and joy, stories show us the meaning of life and our place within it. They show us how we should act and choose and the rewards and pitfalls of those acts and choices. Priests, preachers, politicians, and public speakers throughout the ages have all known that nothing drives home the point of their message like a good story. We even do it to ourselves, instinctively assigning the significant events of our personal lives to various “stories,” whether it’s the story of our getting our driver’s license, going off to college, and finding or losing love. Everything fits into some sort of story.

Yet just as universal as our need for storytelling, is our need for those stories to be received in the company of others. Aristotle described the appeal of theater in his “Poetics,” the first serious study and analysis of drama. He contrasted it with the performance of the sacred mysteries, yet ascribed to it a similar conveyance of insight, purification, and spiritual healing through visions, called the “theama.” Thus the location of such a performance was named “theatron.” In other words, Aristotle defined theater as the place where humanity receives the wisdom of stories through visions. And much of the power of drama comes from its communal nature—the fact that we consume it as part of an audience, which attains its own collective consciousness for the duration of the presentation.

For plays, the “truth” of a particular presentation was necessarily limited to one particular time and place. And the quality of the experience varied immensely, based on whether Hamlet was being played by Olivier, or Fred the neighborhood butcher. But for films, where the same presentation can take place over vast reaches of time and space, and where we can all make a claim to sharing the same experience, we all have a chance to belong to the same tribe. We all get to share the same sense of wonder as we enter the massive gates of Jurassic Park, and see those giant dinosaurs made real—even if we intuitively know they’ll soon be hunting our emotional stand-ins—the cast—so convincingly that we’ll forget about our popcorn until the action lets up for a moment.

The motion picture experience is never funnier, never more terrifying, and never more satisfying than when we experience it as part of an audience. But now, as we emerge from this global pandemic, we have to ask ourselves: Are we on the verge of losing the primordial impact of film in theaters? Will our fear of contagion bring about the demise of this extraordinary experience and its potential to inform and inspire mankind? Might the so-called progress of internet-streamed “entertainment” inure us to what we’ve become used to this past year: consuming endless hours of it, sheltered in the safety of our homes?

For our part, we hope not. Because if we decide that we’re no longer willing to venture out to join our local tribe in a dark cave and receive the true power of story by the light of a flickering flame, then we will have lost something. It’s been said that sooner or later we become the stories we tell. But maybe it’s even truer that we become the stories we’ve shared. And no matter how many times we revisit a favorite movie in the comfort of our own home, we’ll always fondly remember the first time we saw it—the when, where, and with whom—in a theater.

Cary Solomon and Chuck Konzelman have been writers and producers in the entertainment industry for 30 years. They have worked with Warner Brothers, Paramount, Sony-Columbia, and 20th Century Fox. diehardinhollywood@gmail.com