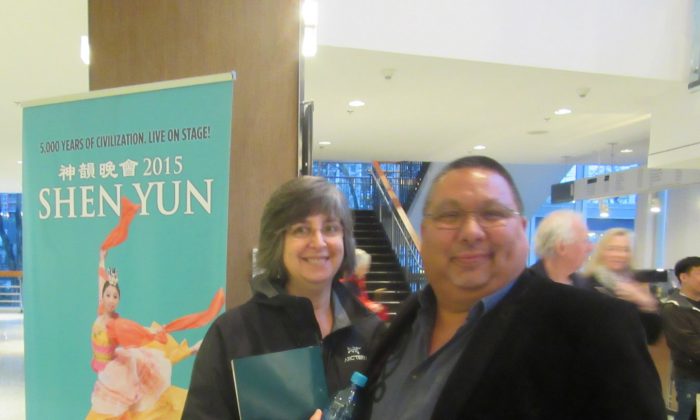 VANCOUVER–Huu-ay-aht First Nations council member Tom Happynook travelled all the way from his home on the west coast of Vancouver Island to downtown Vancouver’s Queen Elizabeth Theatre on Jan. 17 to experience Shen Yun Performing Arts for the first time.

Mr. Happynook, a member of the HFN Executive Council and Legislature and former Treaty Negotiator, attended the evening performance with his wife, Kathy. He said he would certainly return to see the performance again next year.

“The costumes were beautiful, exquisite, and colourful, the storyline was good and the dancers were incredibly talented as well,” he said.

“The way that the show was presented—taking us through time—I thought it was a good way to present the cultural dancing of China.”

New York-based Shen Yun is the world’s premier classical Chinese dance and music company. Formed in 2006, its mission is to revive 5,000 years of divinely-inspired Chinese culture, largely destroyed during the Cultural Revolution and violent campaigns regularly waged by the Chinese communist regime.

“That’s very well done,” he said. “I think it’s very important that … the values, the principles, and teachings of various cultures come forward through dance and song and though the performing arts.”

He was impressed with the many folk dances performed in Shen Yun, which feature a selection from China’s many different ethnic regions, including their distinct dance styles, character, costumes and traditions.

“It was important to show various cultures in the area, and bring them forward,” said Mr. Happynook. “Being a First Nations person, culture is extremely important to me.”

Mr. Happynook also admired Shen Yun’s ability to blend ancient legends and tales with modern technology—each of the story-based dances and folk dances in the performance are accompanied by high-tech digital backdrops. The interactive backdrops project scenes and landscapes from China’s multifaceted regions and geography, in addition to heavenly realms. At times it even creates the illusion that the performers can jump in and out of the screen.

“The background scenes were beautiful, very nicely done,” he said. “I like the way that the dancers came out of the screen onto the stage, that was very well done. I thought that was just beautiful, colourful, and exquisite.”

The backdrops and dancers are also accompanied by Shen Yun’s original orchestra, composed of traditional Chinese and Western instruments blended together in a fresh, harmonious sound. Mr. Happynook appreciated the rare opportunity to experience a live orchestra along with the dance.

“That’s a really cool part of coming to a performance like this, is to have real musicians playing real instruments,” he said.

He was especially fond of the two-stringed erhu or “Chinese violin,” known for its haunting, expressive sound. The instrument was skillfully played by acclaimed virtuoso Lu Sun, in original composition “All for Today.”

“The [erhu] was incredibly good and I thoroughly enjoyed the piece,” said Mr. Happynook.

He also enjoyed the performance by soprano Min Jiang, who uses the bel canto technique to sing Chinese lyrics–an incredibly difficult feat to master, according to the Shen Yun website.

“It was very well done,” he said. “Their voices were so powerful.”

After hearing that Shen Yun produces an all-new show each year, Mr. Happynook pledged to return.

With reporting by Ryan Moffatt and Justina Wheale