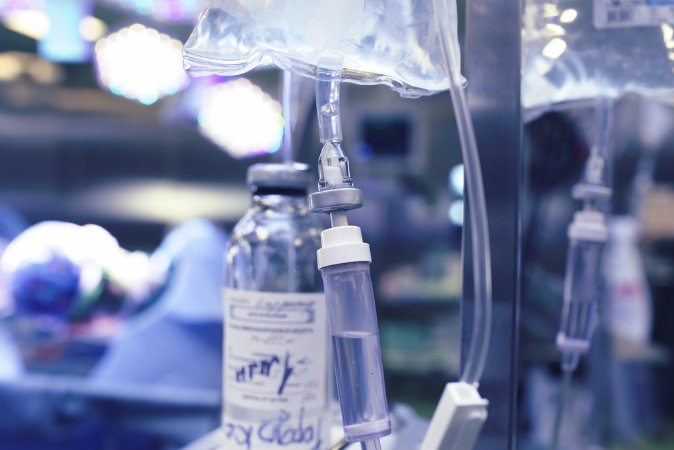 A file photo of an intravenous bag in a hospital. The process of putting people into a state of suspended animation involves pumping saline into the body to replace blood. (Shutterstock*)
Health

First Humans to Be Placed in Suspended Animation

This week, doctors will finalize details to move ahead with the first suspended animation procedures to be performed on human beings. People will be placed in a state between life and death as a way of giving doctors extra time to work on sudden, fatal injuries.

At the UPMC Presbyterian Hospital in Pittsburgh, Penn., the next 10 patients to meet the criteria—for example, people with fatal gunshot wounds—will be placed in suspended animation for a few hours while doctors treat them. Such patients are received at the hospital about once a month, according to New Scientist, so the first test case could come in April.

Surgeon Samuel Tisherman, who is leading the trial, told New Scientist: “We are suspending life, but we don’t like to call it suspended animation because it sounds like science fiction…. We call it emergency preservation and resuscitation.”

1. Cold saline is pumped into the brain and heart and will flow through the arteries to the whole body, replacing all the blood.
2. The patient’s body will cool dramatically, reaching a temperature of 10 degrees Celsius in about 15 minutes.
3. The patient will have no blood and will not be breathing, but his or her cells can still survive for hours.
4. Doctors will have a couple of hours to work on the injury before pumping new blood into the body. In a 2002 trial on a pig, the pigs heart restarted on its own and the blood flow warmed the body. If the heart does not restart, the patient will be resuscitated.

The procedure will not freeze people for years as in science fiction movies—not yet, anyway.

Surgeon Peter Rhee at the University of Arizona in Tucson helped develop the technique. He told New Scientist: “After we did those experiments, the definition of ‘dead’ changed. … Every day at work I declare people dead. They have no signs of life, no heartbeat, no brain activity. I sign a piece of paper knowing in my heart that they are not actually dead. I could, right then and there, suspend them. But I have to put them in a body bag. It’s frustrating to know there’s a solution.”

In a 2010 Ted Talk, cell biologist at the Fred Hutchinson Cancer Research Center Mark Roth talked about his hopes and work on suspended animation. His method uses small amounts of hydrogen sulfide. The hydrogen sulfide binds to where oxygen usually binds in the body, thus reducing the need for oxygen. He has successfully tested this method of suspended animation on mice.

He highlighted the use of suspended animation in nature. Plant seeds and bacterial spores can remain alive in a sort of stasis for as long as 250 years. Eggs in human ovaries exist in a state of suspended animation for some 50 years. Pets stores sell bags of sea monkeys. Dump them in a tank of water, and in a week or so little shrimp will be swimming around in the tank.

Roth also gave examples of cases in which humans have accidentally been put into a state of suspended animation. A skier was once trapped in an icy waterfall. She had no heartbeat and could be considered dead, but she was revived and healthy. In Canada, a 13-month-old wandered outside in nothing but a diaper in the dead of winter. She was clinically dead when she was found, but was nonetheless revived.

People can be revived a few hours after their heart has stopped without neurological damage in many cases, said Roth. He said: “You’re not dead until you’re warm and dead.”

*Image of an IV bag via Shutterstock