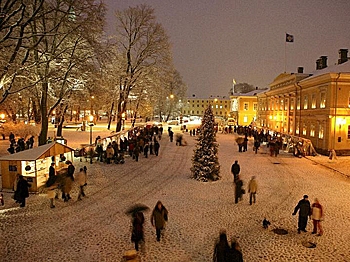 The Christmas tree with real candles was brought to Finland by the Germans. (Courtesy of Elke Backert)
Travel

By Elke Backert
Print
Fir branches cushion the steps to the "Haus der Engel," (Angel House). Fragrances wafting from beeswax candles and red apples entice people to enter the establishment. The café and gallery carries its name deservedly. The waiters and waitresses masquerade as angels and are as seductive as the angel paintings decorating walls and chairs. The food is as tasty as the harpist's music is lyrical. Drinks are served from angel-shaped cups and glasses, and the names of sweets go right along with the venue's theme: cakes called "Seraphim, Armor's Arrow, Angel Kiss," and "Fallen Angel."

This 100-year-old frame house in the former capital Turku is merely one examples of the cozy Finnish Christmas atmosphere. The snow enveloping trees and roads in white makes the mood perfect.

According to their tradition, the Finn's Christmas season begins the first Sunday of Advent when worshippers in the churches sing G.J. Vogler's "Hosianna Hymn," an event no one wants to miss. Advent concerts are also popular. But long before that comes the Bazaar when women meet and organize the event, and employees organize the "Pikkijoulu" for their employers, the "Small Christmas," a special celebration.

With the onset of Advent, roads, streets, shops and stores dazzle with their light displays, as do the many evergreen trees set up everywhere. December 6 is a national holiday, and since 2008 is the 191st anniversary of Finland's independence from Russia, no Finn would be caught without candles in the window.

December 12 is St. Lucia Day, named for the Sicilian virgin and martyr. The day was initially celebrated on December 13, primarily in Sweden; that's why originally only Swedish-speaking Finns in Southern Finland commemorated the day. Everyone thought this to be the shortest day of the year that needed illuminating with candles, to dispel the gloom. A candlelight procession is customary. By tradition, one of the daughters in a family is chosen to wear white garb with a red sash that dons a crown of candles and offers sweets to family and friends, and sings songs with her brothers and sisters. In Turku, the Lucia bride, as she is known, takes a ride through town in a horse-drawn carriage.

That tradition is one of many the Finns have adopted from their neighboring countries. The German custom of lighting one candle per week in the four weeks preceding Christmas is another one, as is the use of a Christmas tree. The Finns decorate their trees with chains of paper flags and suspend a straw mobile from the ceiling. Handmade tree ornaments predominate, crafted either from wood or straw. Those who don't create their own buy them at the Christmas Market. Along with these purchases goes the consumption of "Gloegi," mulled, spiced wine augmented with raisins and almonds.

Christmas Eve is the high point of the year. At the stroke of midnight, according to tradition harking back to medieval times, Turku's mayor proclaims the "Christmas Peace." He reads the proclamation from the Brinkkala House balcony and calls on the population to remember their insightful and upright lifestyle. Radio stations have broadcast this tradition since 1935, and TV does the same now. When the archbishop concurred with a 1996 resolution – to proclaim Turku as Christmas City, the following three years saw an increase of 11,000 visitors, booking overnight stays during Christmas for the next three years.

Lovely flowers grace the table: hyacinths, lilacs and Lilies of the Valley, all imported to Finland.

The foods include ham and dried, prepared cod, but the star of the feast is the ham, flavored with mustard. People hold to the lore that this cut of meat represents an Old Norse sacrificial offering to Freia, the goddess of fertility and love. The modern ham is presented with several side dishes, one of them a casserole containing turnips, rutabagas and potatoes and carrots. The other part of the meal is the steamed cod served with a butter sauce, possibly a throwback to the Catholic tradition of eating fish during Lent. Also on the table are several versions of herring, called Rossoli. And of course the rice pudding is a must! The one finding the hidden almond in his/her portion will be rewarded with good luck.

Not even the birds are forgotten. People put out suet balls and oats. The 5:00 p.m. church bells call people to worship and to a cemetery visit where lit candles decorate the graves. And, unbelievable as it may seem, the sauna plays a major role in the festivities. Chimney rises from the numerous sauna building all over Finland. In former times, people left a bowl of porridge in the sauna, to appease the sauna spirits.

‘Joulupukki’ Arrives in a Reindeer Sleigh From Upper Lapland

Finally he arrives—similar to our Santa Claus. While bringing in a basket of gifts, he queries the children as to their conduct. Asking if they had been good, he hears a resounding "yes." Elves accompany him from Kovatunturi Mountain in Lapland where he lives. He is busy all year because of the many letters he receives from children all over the world. He has his own post office and workshops at the Polar Circle where one can visit him anytime and whisper a wish into his ear.

Helsinki was named Europe's Cultural Capital in 2000 and became the world's focus for a time with her ice and snow-constructed church at Cathedral Plaza. Weddings were even held in that structure. The church was a replica of the Ulrike-Eleonore Church that had been razed to make room for the new cathedral.

Turku, Finland's oldest and now new Christmas City, is situated on seven hills like Rome, and will officially conclude the Christmas season on January 13, 2009, the feast day of St. Knute. The Turky Cathedral is Finland's national shrine. The city will become a cultural heritage site in 2011. The fortress, dating back to 1280, houses the Historic Museum where the most elaborate manger scenes vie for visitors' attention with the ones displayed at the local cathedral. One of these manger scenes is made with Barbie dolls.

Aside from the "Christmas Market from Times Gone By," visitors can peruse another one that features modern handcrafted items at the Handcraft Artisan Museum. Several of the tables there are decorated in period designs, as are those in the Museums apothecary in the Quensel House.

The illuminated Aura River promenades create a magical, romantic ambience and are an invitation for people to stroll, shop and glide on the skating rink and ice run. First-class wellness hotels make a visit to this city an event for the whole family.

Read the original article in German.