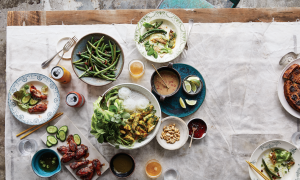 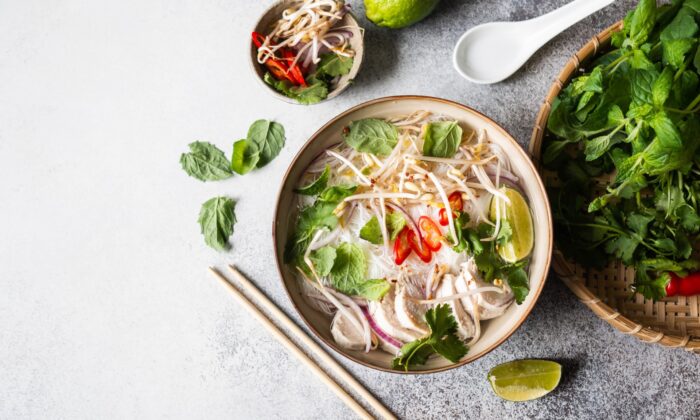 An assortment of fresh herbs, among other crunchy, raw veggie fixings, is essential to the pho experience. (Sentelia/Shutterstock)
Recipes

Finish Your Soups With Fresh Herbs

How to take an ordinary bowl of broth to new, aromatic heights
By Ari LeVaux
biggersmaller
Print

Last summer, I bought a pile of bitter eggplant at the farmers market. I’d never heard of it, but the green, red, yellow, and orange wrinkled spheres drew me in. The farmer, an immigrant from the Laotian mountains, and the advice she gave me sealed the deal.

She recommended two bitter eggplants for a large kettle of water, sliced in half and simmered with pork. And dill leaf, she added.

Cooking the eggplant with dill helps cover its extreme bitterness. Adding dill at the end, where it can’t cook for very long, adds an additional kick.

Herbed Soups Around the World

My mom’s chicken soup is anything but bitter, and includes a lot of cooked dill. And I like to add some fresh at the end, too.

You’ve probably tried pho, the Vietnamese soup famously served alongside a plate of herbs, sprouts, and other raw fixings. The better pho restaurants will serve a differently formulated garnish plate with each flavor of pho. Andrea Nguyen, author of the James Beard-award-winning “The Pho Cookbook” (which I helped recipe test), is a connoisseur of this auxiliary salad plate.

“Fresh herbs add vibrant color, flavor, and aroma to pho,” she told me. “Whether it’s chopped cilantro in the bowl before the hot broth hits everything, or torn mint, Thai basil, or culantro [aka sawtooth, a type of Vietnamese herb] leaves added at the table, herbs are an essential part of the pho experience.”

Posole, the brothy Mexican corn chile soup, is a lovely winter soup, similarly finished with a plate of fresh herbs and strong-flavored veggies such as cilantro leaves, chopped onions, and sliced radish.

Chicken kaeng om, a dish from the northern mountains of Thailand, calls for a strong and complex broth flavored with lemongrass, galangal, turmeric root, and chicken. That rich flavor is elevated to new heights with the final infusion of raw basil, dill, kaffir lime leaf, thin-sliced cabbage, and spring onion tops.

In winter, growing herbs indoors can be an easy way to keep fresh local greenery in your life. My supermarket sells potted basil and other herbs in the produce section, ready to grow on your windowsill, to be plucked as needed into your broth. And many of the vendors at my local farmers market sell herbs from heated greenhouses.

Herbs are full of oils and various oil-soluble aromatic compounds that disperse in the broth, permeating every sip and bite. Other raw vegetables like onions and peppers can similarly improve a broth.

But not every herb or strong-flavored vegetable will be a winner in every bowl. The herbs and veggies you add to a soup should work together and with the broth. Dill may work in Mom’s chicken soup and bitter eggplant broth, but that doesn’t mean we want dill in the pho, where it would clash with the other flavors.

The easiest way to make herb soup is to get some broth, get some herbs, and start playing. Vegetables, meats, mushrooms, bones, and other soupy ingredients are allowed as well, just as long as the soup remains more brothy than chunky.

The best broth will always be homemade. Perhaps from a holiday carcass, or the bones from a rack of lamb. But there’s no shame in using bouillon, pre-made stock, or simply your instant ramen of choice. From there, may the best herbs, and aromatic veggies, win.

Camping in southern Nevada last week, I made a trip to Las Vegas, where I found a bowl of oxtail pho at a restaurant called Viet Noodle Bar. I got it to-go and brought it back to camp, where I re-heated the oxtail in the broth. Then I added the noodles and served it with the many garnishes: basil, cilantro, sliced onions and jalapeños, a lime quarter, and a pile of crunchy mung bean sprouts, along with hoisin and sriracha sauces in little packets. It was the best of all worlds: soup and salad, raw and cooked, wilderness and civilization.

During my Vegas run, I also made a quick pilgrimage to Greenland Market in the Koreatown district, where I purchased some cutting-edge ramen, including Nongshim brand’s non-fried noodle soup with dried anchovy paste and Samyang brand Chewy Chewy Su Tah ramen, among others. I had also loaded up on fresh herbs for the cooler.

Thus, I was ready to cook herbal soup from scratch in my camp, with ingredients I cobbled together from my cooler. It turned out great.

Add an extra cup of water to the pot beyond what the ramen package directions dictate. Add the flavor packets to the water and heat it on high. Add the carrots, mushrooms, tofu, and noodles, and bring to a boil. Add the egg, cook for a minute, and turn off the heat.

Season with soy sauce, if necessary, and serve with cilantro leaves and jalapeño slices.