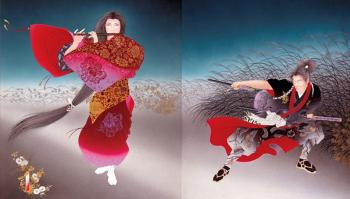 LOS ANGELES—The attention Gary Hostallero gives to detail is something to behold.

Of Korean, Filipino and Spanish descent, Hostallero explained his style and the impetus for his work with a warm smile and easy manner.

Initially Hostallero studied to be a medical illustrator, which combines anatomy and classical rendering. While living in Japan for three years he acquired the skills and aesthetic that characterizes the Orient. He is also influenced by “Hawaiian color combinations and vibrancy of the flowers and fish.”

Drawing on inspiration from his childhood passion of Japanese Samurai stories and legends, he began to integrate the Boshido (way of the warrior) into his life and art. His subject matter includes images of three Samurai who later become statesmen—Oda Nobunaga (1534), Toyotomi Hideyoshi (1538) and Leyasu Tokugawa (1542). Hostallero also has a stunning depiction the Tiger Emperor of China, Qin Shihuang (259 BC) who made important contributions to Chinese culture.

His commitment to historical accuracy grew when he visited an art exhibit in San Francisco. Hostallero was approached by a sensei who “scolded me for not illustrating the armor correctly.” Hostallero then learned how armor was constructed to make his portrayal not only beautiful, but impeccably precise as well.

He uses pen and ink, acrylic, air brush and fine particles of gold mica to achieve the refined and intricate surface which has become his hallmark. This attention to detail takes him about 800 hours per image to complete. Lithography, sculptural embossing and metal foil stamping are some of the techniques used to create these works.

“To get all this really extreme detailing I use fine needles and sandpaper to get the shading,” says Hostallero describing his portrait of Bruce Lee. “And then I paint with acrylics layered with 20-carat gold leafing in the background.”

Next for Hostallero is a collaboration with costume designer Anne Namb who will be creating the costumes for a production of “Madam Butterfly” in Helsinki, Finland. Hostallero will design the textiles for the fabric.

On the other side of the world, his historical renderings will appear in school textbooks throughout Japan, spreading beauty and splendor of traditional culture, and the wisdom and values behind it.

Represented by Pacific Artcrafters, Gary Hostallero exhibited his exceptional work in a small booth where I met him recently during the annual Echo Park, California Lotus Festival.