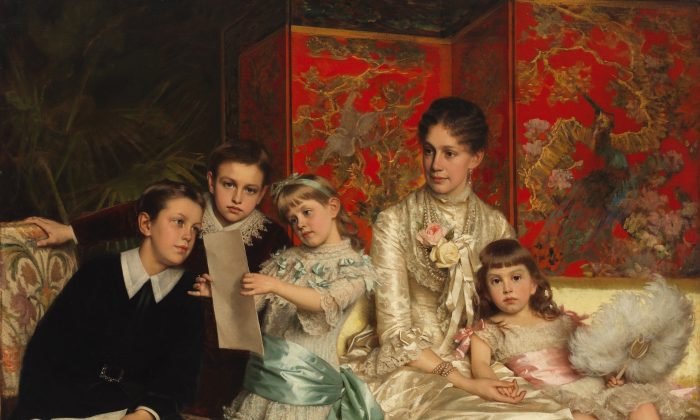 "Cornelia Ward Hall and Her Children," 1880, by Michele Gordigiani. Oil on canvas. (Museum of the City of New York)
Arts & Culture

NEW YORK—When you and your Gap jeans walk into the Gilded New York exhibit at the Museum of the City of New York, you’re likely to feel baffled at the totally alien lifestyle of the Gilded Age.

Why would any sensible woman buy tiny leather opera gloves with fingers so narrow that to make them wearable required the use of a dedicated stretcher tool? Even then they’d squeeze your knuckles blue. What’s more, our fair lady would deem a once-worn pair too distorted for further use and require a fresh pair for her next appearance at the opera.

How about a curious object called the bonbonière? Imagine a little bejeweled locket that dangles from a long chain. A lady would loop its end on her finger and whenever she found her breath less than rosy, she’d open it up and pop out a mint from this glorified Tic Tac holder.

Also on display are many other equally stunning though arguably more useful objects—things like feathered fans, jewelry, silverware, and ball gowns by Paris couturier Charles Frederick Worth.

Tiffany & Co., the jeweler that came to prominence during the Gilded Age, funds the city museum’s new Tiffany & Co. Foundation Gallery, where the present exhibition is being shown. New York-based William T. Georgis Architects designed the gallery to look and feel like a Gilded Age home. Several pieces of Tiffany jewelry are on display as well.

Along with portraits of several Gilded Age leading ladies like Cornelia Ward Hall, Mrs. DeLancey Iselin Kane, and Louisa Van Rensselaer Baylies, the exhibit presents 100 objects from New York between 1870 and the turn of the century.

The Point of Frivolous Objects

The rich and powerful have commissioned or purchased expensive and not-very-utilitarian objects as status symbols since the beginning of history.

The ancient kings of Asia were buried with excessively elaborate, purely ceremonial objects. In Neolithic China, they had jade axes that took months to fashion and were probably swung but once to mark the beginning of harvest season. Though such an object was in its own way a luxury, we today don’t find it reprehensible like some Gilded Age extravagances.

Probably this is because we and the jade axe are separated by so much distance and time while the Gilded Age elite conspicuously blew their cash right here in Manhattan, USA, the land of equality, the nation that shook off that old-world relic called the monarchy.

Gilded Age elites put on a show precisely to flaunt their wealth and thereby underscore their social status, the fact that they had made it to the top of the social ladder—whether it be by building empires in industry (the Carnegies), real estate (the Astors), or shipping (the Vanderbilts).

“The whole concept of trophyism is really a new money concept. If you’re old money, you’ve arrived. You don’t have to prove who you are,” said Phyllis Magidson, the city museum’s curator of costumes and textiles. Magidson, Donald Albrecht, and Jeannine Falino co-curated the exhibit.

Dressing up for huge, elaborate soirees was an indispensable part of the social season, which lasted from December to Easter.

In 1883 Mrs. W. K. Vanderbilt threw a costume party so big, all the fashionable men and women were driven to distraction trying to decide who to dress up as, according to a March 27, 1883, New York Times article.

In 1897 Cornelia Bradley-Martin transformed the Waldorf into the Versailles Palace and asked guests to dress as characters from the 16th, 17th, or 18th centuries. According to Frederick Townsend Martin’s 1913 memoir, his sister-in-law purposely gave her guests such short notice that instead of ordering their dresses from Paris, they’d have to support the local garment business.

That ball cost over $10 million in today’s dollars and, though it was privately financed, its cost set the entire country all atwitter. So much criticism was fired at the Bradley-Martins that they subsequently moved back to England.

As hard it may be in 2013 to relate to elites of the 1890s, we owe them thanks for all the cultural, educational, humanitarian, and medical institutions their philanthropy helped build and the industries they developed that enabled New York to become a true global capital.

In the 1890s there existed a Vanderbilt Row, homes built by the son of railroad magnate Cornelius Vanderbilt on Fifth Avenue between 51 Street and 58 Street.

Many objects from the houses still exist in museums, but the houses were torn down by the 1920s to make way for commercial development, according to Donald Albrecht, the city museum’s curator of architecture and design.

Today when you walk down Fifth Avenue, glittering storefronts ply both high-end and mass-market merchandise by appealing to shoppers’ desire to make a personal statement using material possessions.

Depending on how you look at it, that these shops grew from the foundations of razed Gilded Age mansions is either ironic or appropriate.

During the Gilded Age, the nouveau riche challenged “old money” by proclaiming to the public through huge displays of wealth that that they were the new elite.

Vanity publications like Cosmopolitan magazine that were founded during the era made it easy for their less-well-off contemporaries to gawk and emulate the fashions of the rich. Such publications’ continuing popularity fosters American celebrity culture and the pursuit of status brands.

The conspicuous consumption, back then the exclusive sport of the elite, has become engrained in the American psyche.