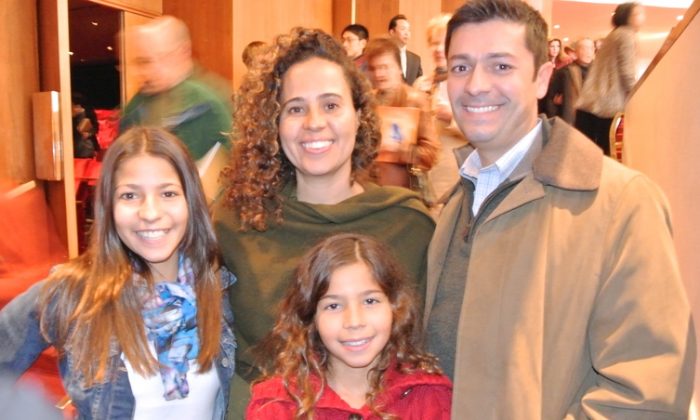 Mr. Mauricio Cortez and his family were greatly impressed by Shen Yun Performing Arts after watching it at the Jones Hall in Houston, Dec. 31. (Vickie Luo/Epoch Times)

HOUSTON—Mr. Mauricio Cortez, finance director for a hotel chain, and his family were greatly impressed by Shen Yun Performing Arts after watching it at the Jones Hall in Houston, Dec. 31.

From the moment the curtain raised, New York-based Shen Yun completely captured the audience’s hearts. Every season Shen Yun puts on an all new performance, including traditional Chinese dance, an orchestra blending East and West, brilliant costumes, and stories that bring China’s 5,000 years of civilization to life.

Mr. Cortez is the Director of Finance and Accounting at Royal Sonesta Harbor Court Baltimore. As a way of celebrating the coming New Year 2014, he and his family watched the Shen Yun performance at the Jones Hall.

One of the Cortez’s takeaways from the performance was the Chinese culture, which they knew very little about but learned quite a bit from Shen Yun.

Besides being educational, the performance brought the family joy, “It was good entertainment and some culture as well. Stories were mixed with art,” Mr. Cortez said. “My special feeling would be emotional, very happy.”