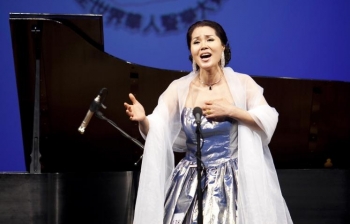 NEW YORK—Sixteen finalists had their last chance on stage in the Gerald W. Lynch Theater before the winner announcement of the 2009 NTDTV Chinese International Vocal Competition on Sunday evening.

The award ceremony will take place at the end of a show by the renowned Shen Yun Performing Arts, a New York-based Chinese dance and music company, in Westchester, New York. The panel of judges will announce the recipients of one gold, one silver, and two bronze awards in the female and male divisions, with cash prizes of $10,000, $3,000 and $1,000 respectively.

“The competition gets better and better each year as contestants come to better understand our mission. Now the people who come to compete know that we are searching for real artists,” said judge Guan Guimin, who was among the first artists to be named a “National First-Class Performer” by China’s Ministry of Culture.

Guan, a tenor, said that the foremost requirement for a “real artist” is good character.

“If they are slick-headed or pompous that's something they can't hide on stage,” he said.

Soprano and pianist Chen Ke, a finalist of the competition, has attended various international music competitions previously. Among all of them, the judging in this particular vocal competition is “very fair.” The others competitions “always involve politics” in judging she said.

Now in its third year, the vocal contest is part of a larger culture series consisting of nine competitions held by international satellite television station New Tang Dynasty Television, whose mission is to promote traditional culture through the arts.

Starting on Friday, contestants from more than 10 countries performed one song of their choice for the preliminary round. For the semifinal and final rounds, contestants were required to perform two songs, again, of their own selection. At least one of the songs must be sung in Chinese, and finalists must not repeat any song from a previous round.

Most contestants selected to perform one song in Italian, German, Latin, Spanish or French and the other in Chinese. The style required, Bel Canto, is a Western operatic singing style distinguished by full, even tones, and a brilliant display of vocal technique. Because of the need for enunciation, using the Bel Canto style presented a challenge for many contestants.

Soprano Chou Hsiao-Chien, a native Taiwanese from Minnesota, shared the Chinese enunciation difficulty with many other contestants, as most of them were trained by Western opera masters.

“I think Chinese songs are very hard to sing. I mean, we need to learn Italian culture to sing Italian songs well and all, but when I go back to sing in my mother-tongue, it’s very, very different.”

The semi-final and final portions of the competition were opened to public. Among the audience were Kate Klebanova, a former pianist, and her mother Svetlana Klebanova, a 40-year vocal coach at the Ukrainian Kharkov Conservatory in Ukraine, who was on a visit in New York.

“There are a lot of talented and very gifted singers in the competition,” Svetlana said.

Svetlana, who teaches many Chinese students, said that she is planning to encourage her students to participate in next year’s vocal competition.