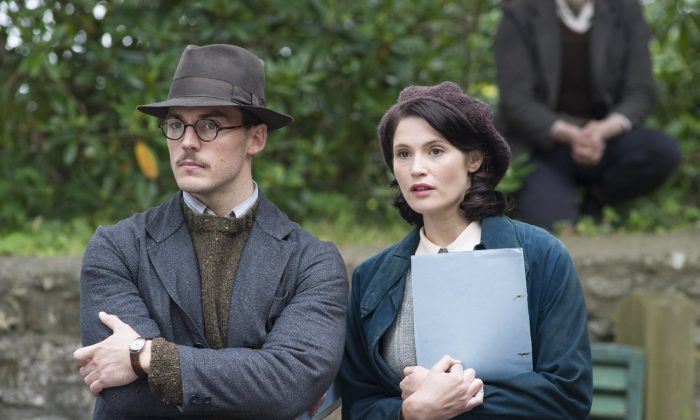 Michael Powell and Charles Frend were great filmmakers, but they couldn’t win the war on their own. Catrin Cole will also do her part as a “Rosie the Riveter” of screenwriting. Initially, she is recruited to boost a prospective propaganda film’s appeal to women, but her talent will lead to more substantial contributions in Lone Scherfig’s “Their Finest” which screened during the 2017 Sundance Film Festival.

Cole thought she was applying for another clerical job, but it was in fact a position writing “slop,” Bechdel Test-passing dialogue, for wartime propaganda films. Evidently, her bosses were impressed by her uncredited newspaper work. Of course, she will remain uncredited on the film and she will necessarily be paid less than her male counterparts. Yet, it is still quite an opportunity.

At first, veteran screenwriter and committed cynic Tom Buckley is less than thrilled to share an office and duties with Cole, but he recognizes her talent relatively quickly. Their mutual attraction will develop more slowly, but in an assuredly steady fashion. Cole will also win over hammy past-his-prime leading man, Ambrose Hilliard, as she helps morph his comically bumbling character into a figure of tragic heroism, while still serving the best interests of the film.

Frankly, the film-within-the-film Cole and company labor to complete actually looks like it would be pretty good, or at least easily watchable if Scherfig and her ensemble made it for real, which is definitely saying something. Conceived as a chronicle of the Dunkirk evacuation designed to boost British moral and sway still neutral American public opinion, it definitely seems to be in keeping with the tone and aesthetics of the classic Powell, Frend, and Cavalcanti films of the era.

The primary film itself is also quite stirring and genuinely touching. Gemma Arterton takes a completely charming and engaging star-turn as Cole that could potentially raise her profile in America to the level she has reached in the United Kingdom. She is like a more vulnerable Rosalind Russell, which we do not say lightly. The romantic chemistry she forges with Sam Claflin’s Buckley always feels like it develops organically.

Likewise, her scenes with Hilliard (played with wry zest by Bill Nighy, the acting guy) have the wit and charm of vintage Ealing comedy.

Yet, perhaps the biggest laughs come from Jake Lacy, portraying an American RAF volunteer, cast in Cole’s film for his jawline and real life heroic exploits rather than his painfully awkward line-readings.

To its credit, “Their Finest” is not the predictable feel good film you might expect. Overall, it will do wonders for viewers’ morale too, but Scherfog and screenwriter Gaby Chiappe stay true to the desperate realities of London during the Blitz.

Regardless, it is a pleasure to watch the accomplished ensemble do what they do best, including Jeremy Irons and Richard E. Grant making the most of cameo appearances. It would make a fitting pairing with “The King’s Speech” with its rousing portrait of the British home front, but with a pinch of feminist commentary unobtrusively sprinkled into the mix.