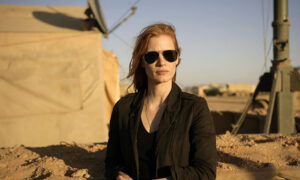 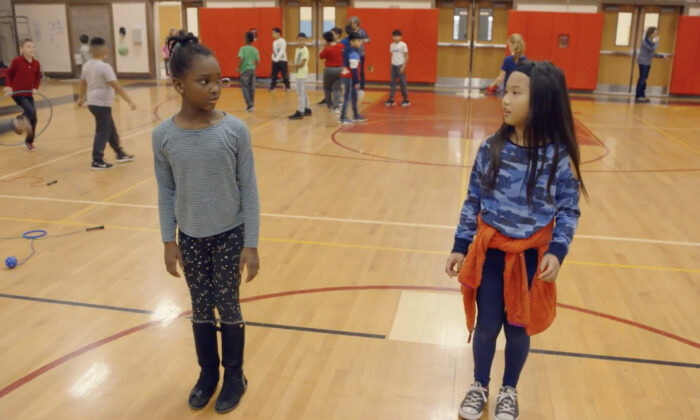 A scene from the documentary “Chasing Childhood.” (Abramora)
Film Reviews

It is an unwritten but widely subscribed-to belief that parents want their children to be more financially successful, better-educated, healthier, and happier than themselves. Perhaps this is merely something imprinted on human DNA by a higher power, or maybe it’s a mission taken on by many parents to prove their superior child-rearing skills.

As presented in the frequently ear-pinning documentary “Chasing Childhood,” there came a tipping point in the late 20th century when parents began viewing their children as decades-long human improvement projects. However, like the proverbial road to hell, crafting the ideal path for the future success of one’s offspring is paved with the best of intentions.

Children Forced to Be Adults

Co-writers and directors Margaret Munzer Loeb and Eden Wurmfeld approach the touchy subject matter with an amazing level of unbiased objectivity not seen in most modern documentaries. Each having grown up in New York City in the late 1970s and early ’80s, Loeb and Wurmfeld were part of the last generation to experience childhood in a manner similar to that of those preceding them.

Once the school day ended, the biggest challenge facing most students back in the day was deciding whether to do their homework first or wait until after playing and blowing off steam until dark or dinnertime. By and large, they stayed in physical and mental shape while playing sports, exploring nature, and developing lifelong friendships. The closest children came to interaction of any kind with electronic devices was watching TV or tinkering with ham radio.

The offspring of Gen X children are the first to grow up with a full-time onslaught of social media, smartphones, and hundreds of cable TV channels, which are too often used as pacifiers delivered by their parents.

In addition, the hours formerly dedicated to down time are instead being filled with a litany of activities that, while looking good on a college application, are forcing kids to behave and perform like adults at the cost of developing social skills and learning to navigate life’s assorted stumbling blocks. It is challenges and the conquering of adversity that contribute to future physical, mental, and emotional well-being.

The filmmakers include a brief story of one preteen New York boy who—depending on your own perspective—is either very brave or altogether misguided. Frustrated that his parents micromanage his every waking moment, the boy requests that he be allowed to travel unaccompanied across town on the subway. After much hemming and hawing, the parents acquiesce but track him on his phone for the entire trip. The look of victory and achievement on the boy’s face at the end of the journey is beyond inspiring.

A Traditional College Degree Not Needed

Rather than providing multiple examples of the dangers of unbalanced overachieving, the filmmakers include just one: Savannah Eason of Wilton, Connecticut. Not unlike the two lead characters in “Booksmart” (2019), Savannah filled every possible second of her youth taking advanced study courses in the quest to get into a top-shelf college. She did this with the blessing of her mother, Genevieve, who, to be fair, put no pressure on Savannah to excel but neither did she recognize that this came at the expense of a social life and a realistic understanding of life after high school.

In a particularly telling moment, Savannah is crushingly devastated after receiving the first “B” of her life and is sure it will ruin her long-term goals.

Without being too specific, things don’t exactly go the way Savannah had planned. She loses faith in herself, finds it almost impossible to acclimate to life away from home, and seeks refuge in controlled substances. In the end, Savannah ultimately chooses a career she loves, where a traditional college education isn’t necessary.

This subplot goes far in supporting the opinions of many financial advisers (such as Clark Howard) who advise against a private university education and the prospect of crippling student loan debt upon graduation. These experts suggest that students and their parents should consider other secure, high-paying careers they would actually enjoy instead of rolling the dice on an unknown one down the road.

In an early scene, Lenore Skenazy—founder of the “Free-Range Kids” and “Let Grow” projects—is shown addressing a group of parents possibly interested in her programs. Skenazy makes a statement that includes the double-edged phrase “helicopter parenting,” with a rejoinder intimating that she’s not speaking to anyone specifically in the room but rather how the term might apply to people all of them might know. Her words generate resounding, slightly self-aware laughter, which suggests that none of them feel they are too controlling. They’re only looking out for their children’s best interests. Everyone ELSE is too hands-on.

As the film was shot prior to the start of the COVID-19 pandemic, it would be interesting to find out if helicopter parents altered their behavior while keeping company with their children for months on end. With group events (sports, music, specialty academic groups, and so on) postponed or outright canceled, were children allowed to venture into the outdoors and practice free will?

Did the sharp uptick in home-schooling lead to previously dormant emotional parent-child bonding?

Little to nothing good came from the pandemic, but if it made enough parents realize that their hovering was taking too much of a toll on their children, it would’ve made for a bittersweet silver lining.

Originally from Washington, D.C., Michael Clark has written for over 30 local and national film industry media outlets and is ranked in the top 10 of the Atlanta media marketplace. He co-founded the Atlanta Film Critics Circle in 2017 and is a regular contributor to the Shannon Burke Show on FloridaManRadio.com. Since 1995, Mr. Clark has written over 4,000 movie reviews and film-related articles.