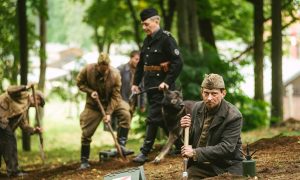 Ostensibly, it is a term used to condone questionable decisions, but the term “Stockholm Syndrome” definitely carries highly negative connotations. In general parlance, it implies that the victims were either too weak or too stupid to resist the brainwashing or seduction by their captors. However, the circumstances of the historical incident that coined the term were considerably different. At least, that is how the somewhat fictionalized chronicle of the Norrmalmstorg Kreditbanken hostage crisis unfolds in Robert Budreau’s “Stockholm,” which screened during the 2018 Tribeca Film Festival.

The hostage-taker presents himself as an American singing cowboy, but his real identity will be the source of some controversy during the standoff. Regardless, his love for Bob Dylan is genuine enough. (The film opens with “New Morning,” a good one that isn’t overplayed.)

Oddly enough, Kaj Hansson (as he is first assumed to be) is not so shocked when the alarm is tripped. In fact, it is a necessary precondition for him to start presenting his demands, which includes the release of his bank-robbing best pal Gunnar Sorensson.

It turns out that Sorensson is rather surprised by the scheme, but he plays along—and maybe plays both sides against each other when the cops offer him a deal to act as a “mediator.” Bank officer Bianca Lind is more perceptive than Hansson (or whoever he is). She can tell he has more enthusiasm than brains. He is in over his head. But the increasingly infuriated cops are probably a greater threat to her safety.

Together with the two other hostages, who also start to see things her way, Lind tries to help plot an exit strategy for Hansson and Sorensson.

For many viewers, the big surprise here will be the portrayal of Lind (and to a lesser extent, her two fellow hostages). Frankly, they are not victims at all. Yes, they were menaced a bit during the initial hostage-taking, but they quickly get over it.

There is no question that Lind is the smartest person in the room—and she chooses to help her serenading captor, making her own voluntary decision. As a result, this film is bound to be controversial, especially in Sweden, considering it portrays the sainted Olof Palme as a craven political beast.

The other happy revelation is just how good Noomi Rapace is as Lind. Let’s be honest; her post-“Millennium Trilogy” work has been iffy. (We’re talking about films like “Bright,” “Unlocked,” and “What Happened to Monday?” here.) Maybe going back to Sweden was healthy for her, because she is totally riveting as Lind, but in a way that is both cerebral and humane.

Rapace also develops some intriguingly ambiguous chemistry with Ethan Hawke as the nice-guy hostage-taker. Arguably, Hawke is a tad old for the “impetuous kid” role (his historical analog was 32 at the time of the standoff), but he might be one of the few thesps working today who can credibly convey the character’s flamboyance and his naiveté.

Of course, Mark Strong is money in the bank as the intense, borderline sociopathic Sorensson. Terms like “heroes,” “villains,” and “antiheroes” definitely get a little murky in a film like this, with Christopher Heyerdahl (a distant relation of the explorer) making quite a memorably severe antagonist as police chief Mattsson.

“Stockholm Syndrome” is a term that gets haphazardly thrown around, but this film makes viewers question its usage, even in its first instance.

It is a tight, energetic period thriller, helmed with a fair amount of flair by Budreau (who also directed Hawke in the hip Chet Baker biopic, “Born to Be Blue”). Highly recommended, “Stockholm” will be released April 12.