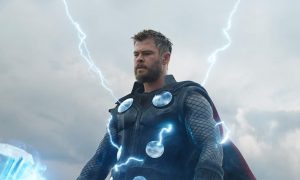 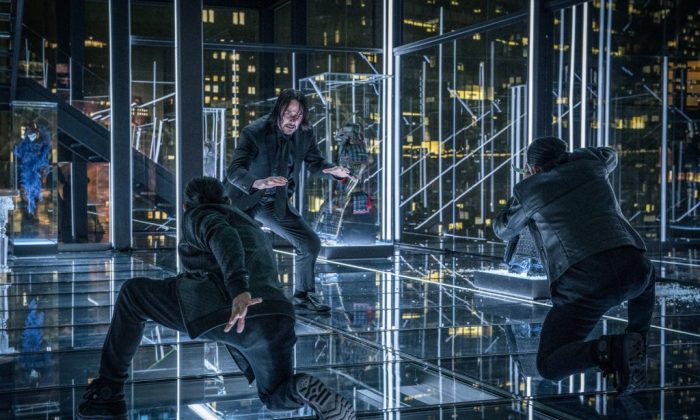 A perpetual cavalcade of corniness and hyper-violence doled out by an absurdly un-killable, anti-hero
By Ian Kane
biggersmaller
Print

Choreography, that’s what it all comes down to. Choreography. At least when we are dealing with action films that don’t have much to offer in the way of storylines.

The first “John Wick” film had a semblance of a storyline. The killing—nay—the cold-blooded murder of the puppy of the titular character (Keanu Reeves) by a ruthless thug is what initially triggered (pun intended) the hero. That act alone compelled him to carve a bloody swath through the many minions of an organization of assassins called the High Table.

The second movie focused even more on action and less on any character development or interesting or original narrative. Our main man violated the rules of the Continental Hotel in New York City, which is reminiscent of a snobby private club, only for those who like to kill other people (for money, of course). The Continental functions as a safe haven for merciless mercenaries and is supposedly off limits in terms of any kind of blood spilling.

Basically, this wafer-thin plot functioned as a showcase for Wick to travel from one exotic location to the next in order to kill multitudes of extras.

In snuffing out a higher-up among the High Table hierarchy, Wick had his membership revoked, and he was branded with the ominous classification of “Ex Communicado.” This designation meant that he had lost the protection afforded by the mysterious, global society of killers.

“John Wick: Chapter 3–Parabellum” is the latest installment of the series, and since many of the rather murky plot elements of the second film weren’t exactly addressed, it contains a convoluted plot—if you can call it that. All you need to know is that a $14 million bounty has been placed on Wick’s head advertised by an “assassin’s all-points bulletin” put out on hundreds of assassins’ cellphones.

But to be fair, great writing, fascinating characters, and storylines aren’t why “John Wick” films are made. People flock to the multiplexes to see hyperviolent activity without having to feel bad about enjoying it.

Admittedly, the film’s visuals are top-notch and set the scene for morbidity and coldness. Directed by Chad Stahelski (who was Reeves’s stunt double in a “Matrix” flick) and with Danish cinematographer Dan Laustsen (“The Shape of Water,” “Crimson Peak”), this is one of the more visually striking films of 2019. Of particular note are the grubby, mean streets of Manhattan, perpetually inundated by waves of rain as neon lights undulate across drab puddles of water—echoes of “Blade Runner.”

But back to the choreography: As Wick trots around the globe in his whirlwind bloodshed tour, killing legions of money-hungry assassins, we see loads of action scenes at a nonstop pace. The fight choreography reminds one of the old karate training ads from the 1980s: you know, where you can tell the head instructors had told their students to come at them with pre-designated attacks, such as overhead knife swings, so that the instructors could conveniently anticipate and block them?

There must be around 80 extras that Wick just wades through like a two-legged meat grinder. Each time he gets close to them, they cock their arms or legs way back and then emit some sort of loud yell as they swing their limbs (or weapons) in wide arcs at him, accompanied by ridiculous whooshing sounds, not dissimilar to your typical “Looney Tunes” cartoons. The gun shootouts are similarly cartoonish.

It’s as if the choreography can’t stand on its own merit and has to be artificially inflated by these preposterous sounds.

“John Wick: Chapter 3–Parabellum” isn’t an intentional comedy. In between the many action sequences are tiny slices of line delivery by the mainly A-list cast. But their lines are so hammy and clichéd that I’d really be surprised if they didn’t need multiple takes because their holding back laughter must have been hard.

Wick is a cross between a darker version of James Bond and faster moving Michael Meyers. He starts off with a couple of minor scuffs on his face that he sustained in the previous films. As he perforates, shatters, and slices and dices the would-be bounty collectors, he in turn sustains an untold number of injuries.

However, by the film’s end, his face looks just like when the movie started. Likewise, his designer suit is impeccable. In a laughable sequence near the end of the flick, a couple of the top henchmen of the head assassin (played by a game Mark Dacascos) land a dozen or so spinning back kicks to Wick’s face and send him crashing through large glass display cases. He gets up, unscathed, and manages to beat them both down without even breaking a sweat or breathing heavily. Evidently, Wick has the regenerative powers of Marvel’s “Wolverine” and “Deadpool” combined.

Laurence Fishburne reprises his role as the Bowery King who risks his life by reaching out to help Wick during the course of the film. Lance Reddick and Ian McShane also show up again as custodians of the Continental Hotel fortress.

Halle Berry dashes in for an extended cameo as Sofia. She runs the Casablanca branch of the Continental and owes Wick a debt of gratitude. She, unarmed, somehow faces multitudes of sword-wielding, 200-plus-pound assassins and beats the tar out of them, single-handedly.

Another newcomer to the franchise is Asia Kate Dillon (“Billions”) who plays the Adjudicator. This character’s purpose is to enforce the ever-stringent rules of the High Table. Dillon plays the role in a particularly robot-like fashion. When not delivering her odd, low-octave lines, she sneers with a perpetual trout pout that would put any Instagram model to shame.

By the end of “John Wick: Chapter 3–Parabellum” the bland script and repetitive fight scenes had become yawn-inducing. However, fans of this sort of mindless action will probably find it morbidly entertaining.