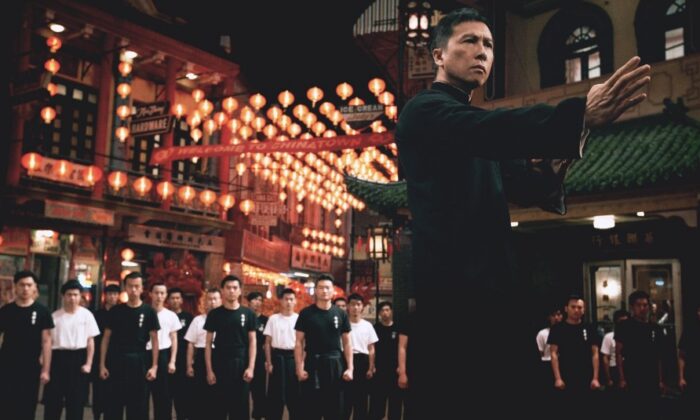 “Ip Man 4: The Finale” marks director Wilson Yip’s (“Dragon Tiger Gate,” “Flash Point”) fourth film about the famous kung fu guru, the titular Ip Man (Donnie Yen). This final flick in the series is an interesting beast, offering a little less action than is usual for these films. Instead, a socio-cultural perspective of race relations between whites and Chinese immigrants is ramped up and plopped front and center.

Ip Man’s wife, Cheung Wing-sing (Lynn Xiong), died during 2015’s “Ip Man 3” (which showcased a pretty epic pugilistic showdown between Mike Tyson and Donnie Yen). Her death results in the kung fu master traveling to San Francisco so that he can eventually move his son over later. Like many immigrants, he believes that his son will have a better life in the States than back home in Hong Kong.

The film is mostly about Ip Man’s students. Bruce Lee (Kwok-Kwan Chan), Ip Man’s most famous student, has a presence in the film, albeit a pretty peripheral one, only being showcased during an early alleyway matchup against a cartoonishly diabolical karate champion (Mark Strange). Lee has angered the already established Chinese kung fu grandmasters by teaching the martial art to non-Chinese.

Hartman’s direct superior, Gunnery Sergeant Barton Geddes (Scott Adkins), is a vehement racist and also convinced that Japanese karate is vastly superior to Chinese kung fu. When Hartman arrogantly tows a wooden practice dummy into one of the Marines’ training sessions, Geddes has his primary karate instructor, Colin Frater (Chris Collins), face off against the young man. Hartman puts up a decent fight, but since he’s only a newbie kung fu practitioner, he ends up getting smashed by Frater.

Shortly after the training brawl, Hartman goes directly to their commanding officer with his kung fu program. Hartman manages to convince the officer (apparently the only nonracist white person in the film) to give his kung fu program a shot, thereby bucking several levels of the chain of command.

This, in turn, enrages Geddes to the point to where, during the film’s dramatic third act, he pretty much kicks everyone’s butt who merely looks at him the wrong way.

You can see the writing on the wall: Ip Man must defend his student. Near the end of the film, Ip Man states that he utilizes kung fu to fight injustice, and since Hartman and other Chinese folks have been abused by Geddes, we are treated to an all-out, balls-to-the-walls showdown between Ip Man and … you know, the evil, racist guy Geddes.

But get this: Ip is shown smoking cigarettes and coughing a lot (he was a heavy smoker in real life), and he discovers that he has throat cancer. Despite his illness and an injury to his left arm, the kung fu hero manages to rise to the occasion, besting a bevy of xenophobic bad boys in hyperkinetic, yet relatively brief, action scenes. The fights themselves are well-constructed and expertly executed.

For the most part, the action also looks natural, with less reliance on the typical Wire-fu antics, where wires and other stage techniques create the fight effects. Wire-fu is showcased in some of the more over-the-top Chinese martial arts films.

However, although the action pieces are fun to watch and well-done, the acting is, at times, hackneyed and overblown—especially the parts of the bigots.

There is also a disturbing preponderance of the Chinese characters using “whiteys” and other derogatory terms for Caucasians. There must have been at least a dozen times where white people are referred to as arrogant and just plain bad people. Chinese-immigrant victims are plagued by loads and loads of nasty, evil whites. Everywhere they turn, the newly arrived Chinese face severe discrimination—so severe, in fact, that things careen over into the absurd in many cases.

In fact, this ham-fisted message is evident from the outset of the film and carried throughout, always reminding audiences that, well, white men are racist.

Thus the entertaining action in “Ip Man 4: The Finale” is overshadowed by a highly judgmental perspective with little in the way of nuance or complexity.