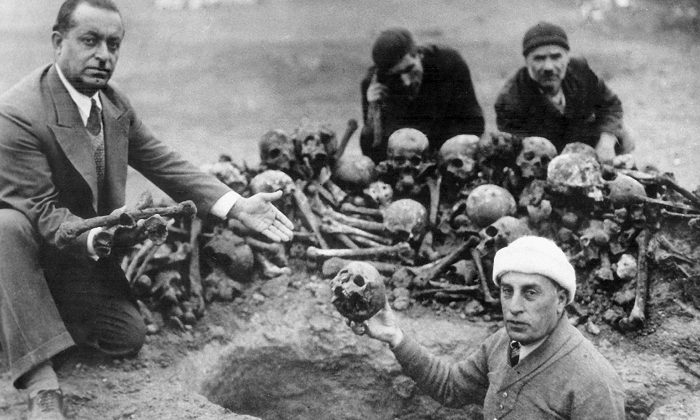 The Armenian Genocide did not suddenly happen. The Ottoman Empire orchestrated the mass murder of hundreds of thousands of Armenians in the Hamidian Massacres of 1894–1896. Carried out without the obscuring benefit of the fog of war, it was essentially an early rehearsal for the genocide conducted by the Young Turks government in 1915.

For years, the Turkish government pressured Hollywood to conform to their redacted view of history, but thanks to the financial support of Kirk Kerkorian, Terry George’s “The Promise” was produced and recently released nationwide. Joe Berlinger documents the behind-the-scenes making of “The Promise” as well as the ugly business of genocide denial in “Intent to Destroy,” which open Nov. 10.

You will hear Spanish on the set, because Spain was one of the locations selected as a good architectural and topographical double for Turkey, which was automatically considered off limits for shooting, for obvious reasons. George was a logical choice to helm “The Promise,” because he had previously addressed genocide in the Oscar-nominated “Hotel Rwanda.” He finally succeeded where others caved-in.

Pointedly, Berlinger gives viewers a detailed blow-by-blow of the campaign launched against MGM’s canceled adaptation of Franz Werfel’s “Fort Days of Musa Dagh,” one of the bestselling novels in translation of the 1930s.

“Intent” has been uncharitably likened to a making-of DVD extra for “The Promise,” but that is not entirely fair. Berlinger does indeed chronicle the production of the film, starting with an early public table read, featuring Eric Bogosian and Anna George. However, the doc also incorporates a great deal of historical and cultural context. Indeed, context is exactly what Turkish nationalists and other genocide deniers do not want viewers to have.

Perhaps most enlightening are the sequences that expose the assassination of Hrant Dink, a prominent Turkish-Armenian journalist who directly addressed the genocide, as well as the lackadaisical prosecution of his murderer. In rather eye-opening segments, Berlinger also lets prominent Genocide Obfuscators (since the object to the term “denier”) a chance to make their case. Arguably, M. Hakan Yavuz takes the cake for most risible argument, suggesting it was Turkish Muslims who suffered most from World War I and its aftermath, because they were so demoralized by the loss of the empire.

Although neither is a masterpiece, “The Promise” is a pretty good film and “Intent to Destroy” is a pretty good documentary. While Terry George was the perfect director to helm “The Promise,” Berlinger’s aversion to transparency and his legal battle to keep outtakes from “Crude” out of the public eye will make him an easy target for deniers looking to discredit “Intent.”

That is a shame, because there could be a narrow window of opportunity for the U.S. government to finally, officially recognize the Armenian genocide after decades of deferring Ankara for geopolitical reasons. Given Erdogan’s continued tilt towards Iran and his recent blatant power grab, would it really be so bad if American reversed course? It would certainly cost him serious face.

Regardless, “Intent” is definitely more than EPK stuff for “The Promise.” There is quite a bit of fascinating history and timely exposures of human rights violations.