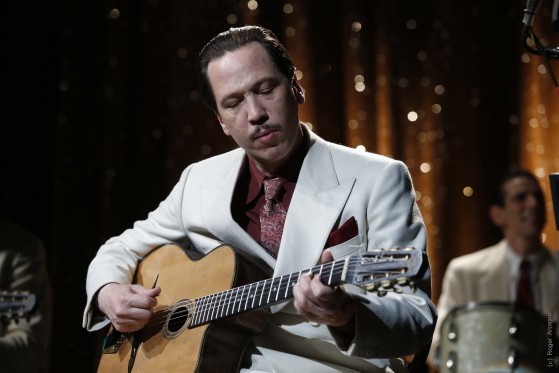 During the National Socialist occupation of France, Django Reinhardt’s “Nuages” became an unofficial anthem of the resistance. It doesn’t at all sound fiery, but its swinging sophistication gave people hope. It was yet another reason for the Germans to dislike Reinhardt, who already had two conspicuous strikes against him, as a Romany jazz musician, but he was internationally famous and had highly placed admirers. Reinhardt’s tricky wartime years are dramatized in Etienne Comar’s “Django,” which opens Jan. 5 in New York.

When Comar’s film opens, Reinhardt has already risen to jazz’s loftiest heights, having established the Hot Club of France with Stéphane Grappelli and jammed with fellow legends, like Duke Ellington and Coleman Hawkins. On the downside, the German occupation is also well underway. Yet, Reinhardt is playing to bigger crowds than ever, thanks to the protection of Dietrich Schulz-Köhn, a Luftwaffe officer often known by his critical pen-name, “Doktor Jazz.” (Supposedly, Kubrick wanted to make a film about him, so just imagine what that could have been like.)

Of course, Reinhardt is still irresponsible and undisciplined, even though his white-haired mother is a constant presence in his life.

Despite his comfort and popularity, Reinhardt is unsettled by reports of Romany massacres and deportations. At the urging of his former lover Louise de Klerk (now presumed to be connected with the Resistance), he agrees to seek asylum in Switzerland. However, when he reaches the French border town, his contacts have a new plan. They have put his crossing on hold in the hopes he will play a command concert for the local garrison, distracting them from the lakefront.

Most of the micro-business in “Django” is fictionalized, but the broad strokes are as true as true gets. That particularly includes the Nazis’ hostility to jazz, which, by the way, Stalin completely shared, not surprisingly. Comar and Alexis Salatko, who co-adapted the latter’s biographical novel, clearly had a keen understanding of the era’s jazz milieu. To their credit, they give Reinhardt’s brother Joseph credit for his talent as a jazz guitarist in his own right (through dialogue rather than performance—the movie is called “Django,” not “Nin-Nin”).

Yet, probably the biggest boost for the film’s claims to authenticity is Reda Kateb’s spooky resemblance to the man himself. It is a quiet, sometimes off-putting performance, but it is certainly in keeping with reports of Reinhardt’s artistic temperament, to put it diplomatically.

Likewise, the Rosenberg Trio are pitch perfect in handling the music performances.

The role of de Klerk is more of an under-written narrative device, so it is hard to blame the normally exceptional Cécile De France for struggling to get a handle on her.

However, Bea Palya humanizes and brings unexpected dimension to his second wife Naguine (quite a challenging role in real life).

“Django” sounds terrific, because it includes so much of Django the musician. Many of his greatest hits are here, as well as Warren Ellis’s reconstruction of his lost requiem mass, “Requiem for Gypsy Brother,” which is interesting, but sounds formulaic compared to the lilting beauty of “Nuages.”

There are a lot of super-talented Hot Club ensembles out there, but nobody can compare to effortless brilliance of Reinhardt’s playing. It sounds as fresh today as it did in the 1930s.

Comar’s film conveys the stylish infectiousness of his music, which is high praise indeed. Enthusiastically recommended, “Django” starts the year in fine fashion when it opens Friday (Jan. 5) in New York, at the IFC Center.