Film Review: ‘Defiance in the Kingdom of Fake News’: A Mini-Look at a Major Horror

As censorship, both state-sponsored and within the private sphere, ratchets up to levels unimaginable in the past, many are seeking out alternative voices when it comes to cinema. The Chinese Communist Party (CCP) has in recent times steadily amped up both its purging of foreign influences and the muffling of its massive citizenry. Fortunately, in this age of decentralized digital media, it’s becoming harder and harder for totalitarian regimes to stifle important information about the human rights atrocities they commit.

Directed by Mathias Magnason (and co-written by Levi Browde, Jan Lokos, and Magnason), the 10-minute mini-documentary “Defiance in the Kingdom of Fake News” is one of many films benefiting from this free flow of information about human rights abuses.

The film opens with quite an impact as we see a young Chinese man, Lei Ming, awkwardly pacing back and forth in a room at an “undisclosed location” in Changchun, China, in 2003. As he holds on to the walls to keep himself from falling down, the narrator talks about how Ming received terrible injuries as a result of torture he sustained while incarcerated at a Chinese labor camp.

Ming, along with five other everyday Chinese citizens—Hou Mingkai, Liu Chengjun, Liang Zhenxing, Zhou Runjun, and Liu Haibo—formed a small group that performed a successful broadcast interruption that sought to rectify the reputation of Falun Gong.

Falun Gong, also known as Falun Dafa, is a peaceful spiritual discipline that’s twofold: It has calm, flowing exercises and meditation, and it teaches the building of its practitioners’ character.

Indeed, Falun Gong is a practice based on Buddhism that harkens back to the days of ancient China. As mentioned in my previous review of the docudrama “Unsilenced,” the practice’s core tenets are truthfulness, compassion, and tolerance, hardly any of which its practitioners received at the hands of the CCP.

The film reveals that since the CCP took power in 1949, it has systematically demonized and wiped out traditional forms of Chinese culture and thought. As the leaders of the CCP took over nearly every aspect of life in China, its message becomes clear—to replace China’s ancient traditions with communism. We see many clips of Chinese state officials humiliating citizens and destroying ancient relics, such as statues of Buddha.

Back in the early 1990s, a man named Li Hongzhi founded Falun Gong. The practice became well-known, not only for its philosophical and spiritual principles but also for its health benefits. As it grew in popularity and swept throughout China, it reportedly had 100 million practitioners by the late ’90s. Jiang Zemin, the leader of the CCP at the time (and later the head of state), considered Falun Gong to be dangerous to the CCP since it had gained so many adherents.

Massive oppression of Falun Gong began in earnest, which resulted in huge numbers of arrests. So many incarcerations were happening that criminals were being released to make room for Falun Gong practitioners. But this demonization by the state was largely ineffective on the general public since people considered Falun Gong practitioners to be virtuous and principled. The state would need another method.

In 2001, five Chinese citizens who were later purported by the state to be Falun Gong practitioners, self-immolated in Tiananmen Square. This horrific public event was recorded and made the rounds on Chinese national TV. As the film describes it, the state smeared Falun Gong by stating that the self-burnings were some type of bizarre religious suicide pact. Since the state’s media manipulation was so relentless and pervasive, many people began to shun Falun Gong.

In 2002, the aforementioned six ordinary Chinese citizens who had been training themselves to pull off their audacious broadcast interruption did just that. For a full 50 minutes, they hijacked the cable TV airwaves and revealed details about how the self-immolation event was one big lie to defame and vilify Falun Gong.

“Defiance in the Kingdom of Fake News” is a short and powerful documentary that punches above its weight. It’s also a timely exposé on the horrors of unbridled totalitarianism. 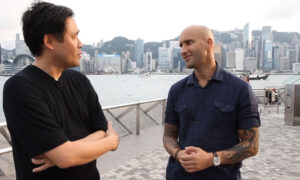 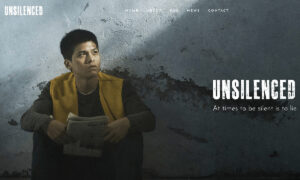 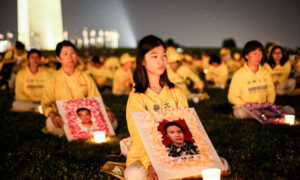 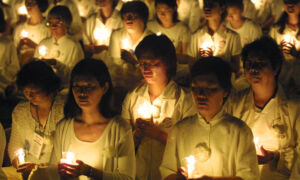