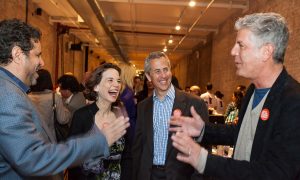 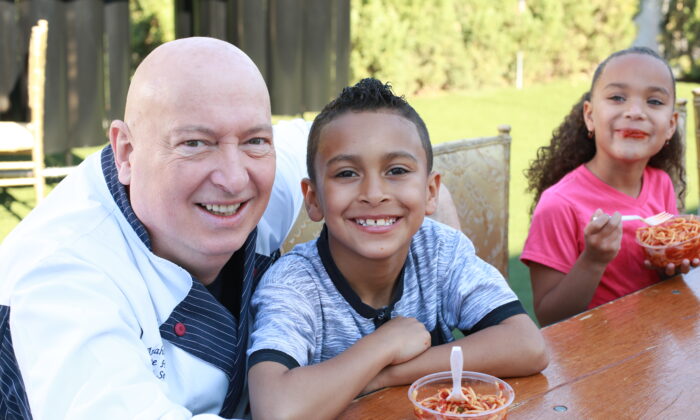 Sir Bruno Serato (L) worked his way up from dishwasher to owner of his own restaurant. (Courtesy of Premium Paris)
Food & Dining

Fighting Child Hunger, One Plate of Pasta at a Time

Sir Bruno Serato, chef and restaurant owner, is on a mission to feed children in need
By Andrew Thomas

Sir Bruno Serato came to the United States with just $200 in his pocket, without speaking a word of English. Now, he’s the owner of the Anaheim White House Restaurant, one of Southern California’s most prestigious restaurants, and is helping combat child hunger with pasta.

Serato grew up under humble circumstances in Verona, Italy. He’s never forgotten his roots, and now feeds 5,000 hungry children a day through his non-profit, Caterina’s Club.

Working His Way Up

Since the age of 14, Serato worked at his family’s small bed and breakfast establishment, taking on all sorts of jobs as needed. He helped in the kitchen and at the bar, cleaned, and waited on patrons.

In 1980, when Serato was 24, he traveled to Orange County, California to visit his sister and learn English. He was only supposed to be in the country for three months, but he fell in love with the place.

“I fell in love with California and Orange County. People were very polite, very kind,” Serato said. He applied for residency and eventually received his green card.

Serato had been trying to learn English using CDs, but thought finding a job would be more effective. A month after arriving in California, he landed a job as a dishwasher at a local restaurant called La Vie en Rose.

At his new job, Serato didn’t care that he was starting at the bottom of the totem pole; he just had an ardent desire to work hard and learn English.

Two days after Serato started, a busboy quit and management asked Serato if he wanted to take the job. He agreed without hesitation. Not only did he have a good work ethic, which patrons appreciated, but he also really enjoyed speaking with diners.

His first customer gave him a $5 tip for cleaning the table, which was a surprise to Serato, as tipping is not customary in Italy. Now, 35 years later, he is still in touch with that customer.

After working as a busboy, Serato was promoted to a waiter position. He was so good at his job that diners would frequently request to be seated at his tables. After a year, he was so beloved by the restaurant’s patrons that the owner promoted him to maitre d’.

In 1984, the restaurant changed ownership and Serato was promoted to general manager. His opportunity to own his own place would come soon after.

At the meeting, Serato and his boss were up front about the fact that they didn’t have the funds on hand to make the purchase outright. The owner told them that he appreciated their candor and honesty, shook both of their hands, and agreed to lease the restaurant to them. Three years later, they were able to secure a loan and buy it in full.

In just 10 years, Serato had worked his way up from dishwasher to co-owner of a restaurant.

“If you work in this country, if you find a job and you work, you always can move forward. That’s one thing that I learned from America,” Serato said.

In April 2005, Serato’s mother, Caterina, came to visit him from Italy. They visited the Boys and Girls Club in Anaheim, which Serato had helped with fundraisers and galas in the past.

During their visit, the director pointed them to a boy who was eating a bag of potato chips for dinner because it was all he had.

“It reminded me of us, me and my brothers and sisters, because we grew up very poor,” Serato said.

The director told him that many of the children lived with their families in motels with no kitchens. Caterina told Serato to go to his restaurant and prepare some pasta to bring back for the children. They were able to feed nearly 50 children dinner that evening.

After the recession of 2008, more and more kids began going to the Boys and Girls Club. Despite losing 30 to 40 percent of his restaurant business, Serato continued to cook pasta for them. He refinanced his restaurant and his home, and was feeding 600 children a night.

For the first five years, Serato paid for everything out of his own pocket. He eventually was able to found the non-profit Caterina’s Club, and after making several media appearances, people began to donate to the organization. Now, Caterina’s Club feeds 5,000 hungry children every day at several locations in Orange County, Los Angeles, and San Diego.

In addition to helping address child hunger, Serato has helped over 200 families move out of motels and find permanent housing through Caterina’s Club’s “Welcome Home” program. These families work hard, but often are unable to afford the deposit for an apartment. Serato pays the deposit to help them make the transition.

Caterina’s Club also has a hospitality program for at-risk youth, which includes training programs for cooking, hospitality, and working the front of the house in an effort to help them find employment. Serato always tells his students his own personal story to inspire them.

For Serato, philanthropy is second nature.

“I feel like it’s just a normal thing for me to do, to help people and children in need,” he said.