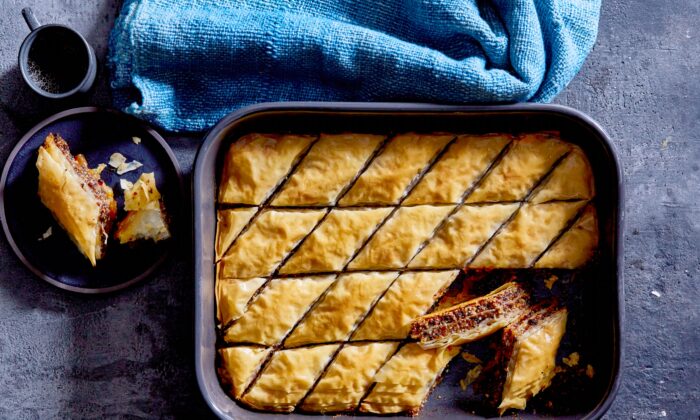 Baklava is a triumph of a confection—a mix of gorgeously crisp phyllo pastry, decadent layers of nuts, and a copious drizzle of fragrant syrup. The dessert is central to Turkish and Greek cuisines and has also spread widely across the Middle East and the Balkans. Jewish communities serve baklava on holidays (typically Rosh Hashanah and Purim) and at special occasions such as weddings and bar mitzvahs. This version adds jammy dried figs to an otherwise traditional walnut filling, yielding a confection that is at once familiar and new.

Make the baklava: Preheat the oven to 350 degrees F and lightly grease a 9 by 13-inch baking dish. Place the walnuts, figs, brown sugar, cinnamon, and salt in a food processor, and mix until the walnuts and figs are finely ground.

Bake until the top is lightly golden and crisp, 30–35 minutes. Remove from the oven and let cool for 5 minutes, then use a sharp knife to cut the baklava into squares or diamonds in the pan.

Meanwhile, make the syrup: Stir together the granulated sugar, water, honey, and cinnamon stick in a medium saucepan, and set over medium-high heat. Bring to a boil, then turn the heat to medium-low and cook, stirring often, until the syrup thickens slightly, about 5 minutes. Remove from the heat, and stir in the lemon juice and rose water. Let cool slightly. Discard the cinnamon stick.

Carefully spoon the warm syrup over the slightly cooled and cut baklava, taking care to pour syrup along the cut lines. Let the baklava sit for at least 2 hours before serving to allow the syrup to soften the filling. Serve at room temperature. Store covered at room temperature for up to 3 days.

Reprinted from “Little Book of Jewish Sweets” by Leah Koenig with permission by Chronicle Books, 2019.