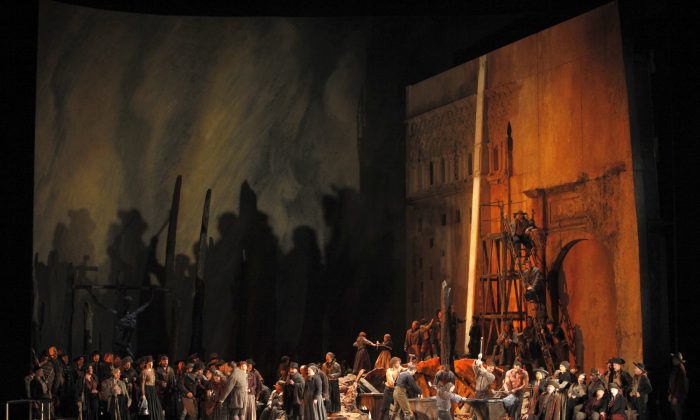 NEW YORK—”Il Trovatore” is one of those operas where great music prevails over a ridiculous plot. The Marx Brothers highlighted and heightened the absurdity in “A Night at the Opera.” This season, the Metropolitan Opera is demonstrating that Verdi’s opera is as potent as ever when the production has a top-flight cast; this one led by superstar Anna Netrebko.

The action takes place during the Spanish Civil War of the 15th century. Sir David McVicar, who originally staged the production in 2009, moved the events to the 19th century.

Count di Luna (leader of the royalist troops) and the leader of the rebels, Manrico, are both in love with Leonora. The two rivals and enemies are unaware that they are brothers.

Years earlier, their father had burned a Gypsy woman at the stake. Her daughter Azucena vowed revenge and kidnapped one of the nobleman’s sons. She intended to throw him into the fire but in the confusion tossed in her own baby instead. Whoops! (Gilbert and Sullivan made fun of this plot device of a baby mixup in “The Gondoliers.”)

Azucena raised Manrico without revealing the secret of his birth. He successfully woos Leonora, posing as a troubadour (the source of the title). Manrico and di Luna cross swords but they both survive. Leonora later learns that Manrico has been injured in battle and, thinking him dead, decides to enter a convent.

The first performance of the season had some extra drama.

Di Luna attacks the convent to take Leonora by force, but Manrico manages to escape with her. However, Di Luna’s men capture Azucena and the count orders a pyre for her execution. When Manrico learns of this, he postpones plans of marriage to rush to the defense of the woman who raised him. The rebels lose the battle, and the count orders Manrico put to death along with Azucena.

Leonora offers herself to the count in exchange for Manrico’s life and secretly takes slow-acting poison. She dies in her lover’s arms, and di Luna sends him to be executed. After that, Azucena announces that her mother’s death has been avenged since the count has taken the life of his brother.

The first performance of the season had some extra drama. The great baritone, Dmitri Hvorostovsky, who played di Luna in 2009 and is currently being treated for a brain tumor, returned to the role but for fewer performances than he had originally planned. At the performance I attended, he had been replaced by Ukrainian baritone Vitaliy Bilyy.

“Il Trovatore” is filled with memorable arias as well as the famous “Anvil Chorus.” From the first appearance of Netrebko, the audience knew it was in for something special. From “Tacea la notte placida” in the first act to the “Miserere” in Act 3 and the final trio, her singing was beautiful and filled with emotion.

Netrebko also looked stunning in outfits specially designed for her. Throwing herself into the role with her usual physical abandon, at one point she even climbed halfway up a wall, as if she were playing Spiderwoman.

Vitaliy Bilyy was a rich-sounding and suave Count di Luna. His big aria, “Il balen del suo sorriso,” earned one of the biggest ovations of the evening. As Manrico, Korean tenor Yonghoon Lee looked dashing and even sounded heroic. His “Di quella pira” was sung with the requisite power and high notes, while “Ah sì, ben mio” was done with sensitivity and even a bit of the trills that most tenors omit.

Mezzo-soprano Dolora Zajick has been singing Azucena at the Met since 1988 and is still a dynamic presence in the part. Stefan Kocan brought his dark bass to Ferrando, making his narrative “Di due figli vivea padre beato” at the beginning of the opera unusually compelling.

The chorus and orchestra performed with gusto under the baton of Marco Armiliato.

“Il Trovatore” runs through Feb. 13, 2016, at the Metropolitan Opera. Antonello Palombi sings the role of Manrico on Oct. 17, and Vitaliy Bilyy again takes over the role of Di Luna on Oct. 17. A second cast featuring Angela Meade as Leonora and Marcello Giordani as Manrico will be performed starting on Feb. 3.