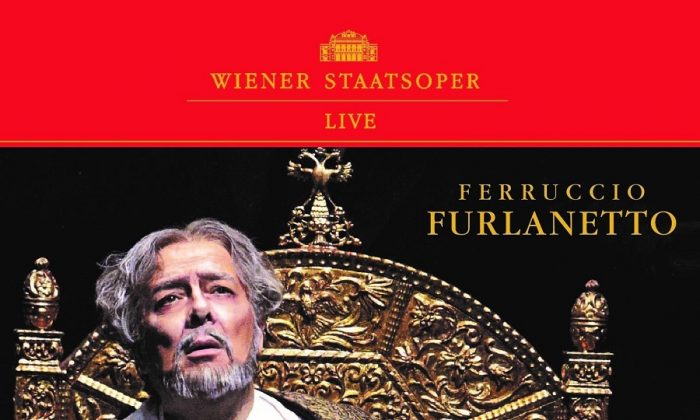 Usually, when I review an operatic production, I don’t return to see it again until there is a new cast member I am interested in seeing. One of the rare exceptions took place when I attended Verdi’s “Don Carlo” at the Metropolitan Opera. The main reason I wanted to experience it again was because I was fascinated by one singer: the bass Ferruccio Furlanetto. He played King Philip II of Spain, one of his signature roles.

Orfeo has released a CD, “Wiener Staatsoper: Ferruccio Furlanetto,” combining excerpts from live performances of “Don Carlo” and another of his acclaimed roles, Boris Godunov in Mussorgsky’s opera. These were recorded at the Vienna opera house between 1997 and 2012. What the two roles have in common is that both Philip and Boris were historical figures, monarchs with troubled histories.

Philip was the king of Spain during the Inquisition. The Verdi opera, based on Friedrich Schiller’s play, is an epic work presenting a father-son conflict and a love story. The romantic hero is Don Carlo, the king’s son, who is in love with Elisabeth, the daughter of the French king. A peace treaty is worked out between the two countries in which Elisabeth must marry Philip rather than his son.

The highlight of the opera and of the “Don Carlo” excerpts on the CD is Furlanetto’s spellbinding performance of the aria “Ella giammai m’amò,” which the king sings when he realizes that Elisabeth doesn’t love him. This is one of the instances where Verdi creates sympathy for an evil character.

Ferruccio Furlanetto is the only Westerner ever to have sung ‘Boris Godunov’ in both major Russian opera houses, the Bolshoi and Mariinsky.
Furlanetto, who is now in his mid-60s and has been playing Philip since 1980, still sings with a rich, solid tone. He is a charismatic figure on stage and his dramatic flair comes through on the recording. He will be appearing at the Met in “Don Carlo” on March 30, April 2, 6, 11 (matinee), 15, 18 (matinee), 22, and 25.

The role of Boris is one I haven’t seen Furlanetto perform, but, judging from the scenes here, he is magnificent. Indeed, he is the only Westerner ever to have sung Boris Godunov in both major Russian opera houses, the Bolshoi and Mariinsky.

Boris, like Philip, is an unappealing character who gets to sing unforgettable music. Furlanetto’s sound is convincingly Slavic, with immense conviction.

Boris became czar of Russia by ordering the murder of 10-year-old Dimitri, the true heir to the throne. The czar is tormented by hallucinations and, facing insurrection, descends into madness and death.

Hopefully, New York will eventually get to experience this remarkable performance. In the meantime, this CD conveys the grandeur of Furlanetto’s art. He often speaks in interviews of the great basses on the scene when he first started singing, such as Boris Christoff, Cesare Siepi, and Nicolai Ghiaurov. Furlanetto takes a place alongside these giants.