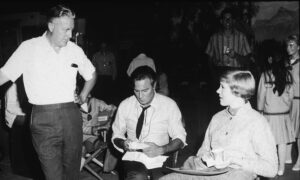 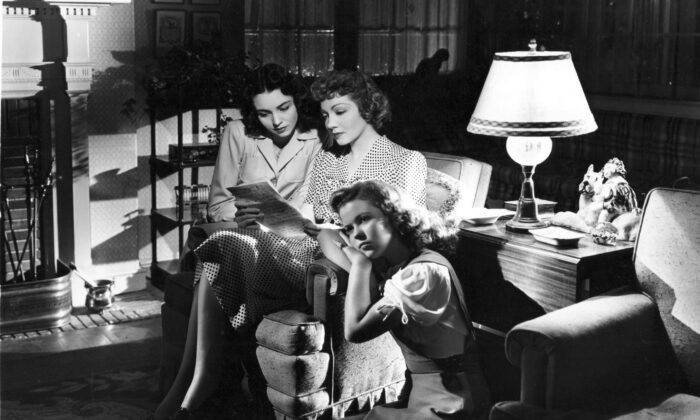 Femininity During Adversity: ‘Since You Went Away’

Do you long for the days when Hollywood showed that women could be cheerful, helpful, loving, and kind, and they were appreciated for these qualities?

Hollywood productions during 1934–1954, when the Motion Picture Production Code’s strong enforcement ensured all films’ decency for everyone, did just that. Traditional role models and values were featured in these classic films, and marriage and the family were defended and glorified. Today, seeing feminine characters in Code Era films is a breath of fresh air.

How did some of these characters play familial roles? While many Code films feature positive feminine characters who are mothers, sisters, or daughters, others feature all three in one film! “Since You Went Away” (1944) is one such film. Set during World War II on the American home front, it focuses on the ladies in a Midwestern family’s household.

While the unseen father, Tim, is at war, his wife and their two high-school-age daughters endure trials and tribulations as wartime civilians. They exhibit the greatest feminine virtues as they keep the home fires burning.

Virtuous women are, ideally, righteous wives and mothers who selflessly serve their husbands, children, and God. Anne Hilton (Claudette Colbert) in “Since You Went Away” matches this description very closely. When her husband joins World War II before the film begins, she is left alone to keep their family running as comfortably as possible while helping the war effort.

Their finances are strained, so she must discharge their faithful maid, Fidelia (Hattie McDaniel), and keep house herself. Anne later sacrifices her room to a boarder, the curmudgeonly Colonel William Smollett (Monty Woolley), whom she serves uncomplainingly. After months of rationing, collecting scraps, helping soldiers, planting victory gardens, and writing encouraging letters to her husband, she declares that she isn’t doing enough and becomes a shipyard welder.

She is always compassionate to friends, family, and even strangers. She is loving toward everyone she encounters, especially her daughters. She reassures the girls’ doubts, respects their feelings, shares in their joys, and helps through their tragedies.

Annie is unswervingly loyal while Tim is gone for months, but family friend Tony Willett (Joseph Cotten) is a frequent houseguest, offering considerate help. Although he clearly has loved her for years, he knows she is eternally faithful to Tim, giving her daughters a wonderful example of fidelity.

Wife, mother, friend, and citizen, Anne Hilton is someone every woman should emulate. She only wants to care for her daughters, make her husband proud, and serve her country. She is brave, industrious, and hard-working, yet she never allows these strong qualities to make her unfeminine. She is still beautiful, delicate, and feminine in her appearance as well as her spirit. She cries to herself, but she always offers her daughters a strong shoulder.

At one point she befriends a fellow welder, an immigrant woman named Zofia Koslowska (Alla Nazimova). She welcomes Zofia into her home for Christmas, making her one of the family and soothing her loneliness through sisterly love. Zofia says to her, “You are what I thought America was,” and viewers couldn’t agree more.

There are three other women in the Hilton household. Jane (Jennifer Jones), the 17-year-old daughter, grows a lot during this film, maturing from a somewhat naive girl into a brave young woman. Jane is initially kind to Bill Smollett because he is a soldier, but she gradually develops deep, unselfish love for him, vowing to wait while he is overseas and marry him afterward even if he is injured. She also is kind to other servicemen, encouraging jealous Bill to help her befriend a lonely sailor (Guy Madison).

Eager to do more for the war effort, she begs her mother to let her be a nurse’s aide during the summer. When a snobby neighbor, Mrs. Hawkins (Agnes Moorehead), criticizes her having this job, Jane boldly declares: “Please don’t worry if our precious, well-bred hands come in contact with those mangled bodies. We’ll survive! Even if they don’t!” She bears personal tragedy nobly, persevering to help a shell-shocked soldier (Craig Stevens) find new meaning in life.

Bridget, called Brig (Shirley Temple), is the younger daughter. Like her mother and sister, Brig endures sadness, loneliness, and want during the war. However, possessing an indefatigably cheerful personality, she is friendly, helpful, and joyful.

When Colonel Smollett moves into the Hiltons’ home, Anne and Jane want to make him comfortable, but Brig decides to befriend him. She reads him her father’s letters, talks to him, asks questions, and arranges for her mother to cook his meals. Although he likes being unsociable, she helps pierce his gruff exterior. She is also devoted to helping Gladys (Jane Devlin), her friend who is too shy to talk or socialize, eventually encouraging her to say “Merry Christmas” to a group!

Brig also helps the war effort. She and Gladys grow a victory garden and run a drive for scrap rubber. Brig also encourages her mother to rent one of their rooms as patriotic duty, reasoning that they would want strangers to show their father similar consideration. Although still a girl, Brig exhibits wonderful feminine qualities, promising to someday become a wonderful wife and mother herself.

The story’s fourth feminine woman is Fidelia, the Hiltons’ maid, who, although not a blood relative, is truly part of the family. When Tim leaves, Anne sadly discharges Fidelia, unable to pay her, so she reluctantly gets another job.

However, she refuses to let the Hiltons struggle without her. She tells Mrs. Hilton that she can’t bear living with her wealthy employers’ other servants, so she agrees to work for the Hiltons on her days off in exchange for renting her old room. Fidelia is so much more than a servant; she is just what her name means, faithful. She is a second mother to Jane and Brig and a confidant to Mrs. Hilton during her hardest times. Anne must be strong for Jane and Brig but can confide in Fidelia.

Like the other women, Fidelia is virtuously humble, acknowledging ways she can grow. When preparing for Christmas, Fidelia is humbled by the Hiltons’ faith in Tim’s return. She confesses: “Mrs. Hilton, I guess I just ain’t on the right side of the Lord. I just ain’t had the right kind of faith. But I will have. From now on, I’ll be a true believer.”

An Example for Us

These days, many associate femininity with weakness, uselessness, and repression, while women’s strong characteristics are linked to feminism. The ladies in this film disprove these ideas. Because “there’s a war on,” Anne, Jane, Brig, and Fidelia endure hardships, challenges, and ordeals that they never imagined. To survive, they must summon emotional, spiritual, and sometimes even physical strength within themselves. This never makes them any less feminine, though. They are always very feminine in their appearance, carriage, manners, and, above all, virtues.

“Since You Went Away” is a masterpiece that is always inspiring. However, the message of courage during trying times is very appropriate for 2020, when, like World War II, the current adversity stretches on indefinitely.

Right now, America needs concerned, patriotic citizens like these characters. This movie encourages Americans to let faith sustain them during difficult times, encapsulated by a minister’s (Lionel Barrymore) moving quote from the final stanza of “The Star-Spangled Banner:”

“Oh! thus be it ever, when freemen shall stand
Between their loved home and the war’s desolation!
Blest with victory and peace, may the heav’n rescued land
Praise the Power that hath made and preserved us a nation.
Then conquer we must, when our cause it is just,
And this be our motto: ‘In God is our trust.’”