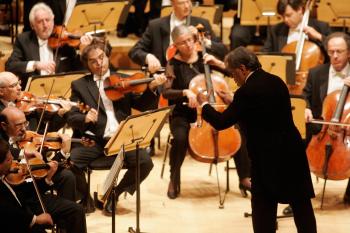 Violin Concerto Born Out of a Great Friendship

BY Kremena Krumova TIMEAugust 31, 2009 PRINT
One of Mendelssohn’s most popular works, "Violin Concerto in E minor," might not have been created without the loyalty and support of his friend, German virtuoso violinist and composer Ferdinand David.

“I would like to compose a violin concerto for next winter. A concerto in E minor keeps running through my head, and the opening gives me no peace,” wrote the genial composer Felix Mendelssohn in a letter to David in July, 1838.

Felix Mendelssohn (who later adopted the additional surname Bartholdi) and Ferdinand David became very close friends. Indeed, they were almost the same age, were born in the same Hamburg neighborhood, and shared the same passion for music. David conducted the premiere of Mendelssohn’s oratorio “Saint Paul” in 1836 when the famous composer suffered with the measles.

In 1838 Mendelssohn was the musical director of the world-famous Leipzig concert arena Gewandhaus and wanted to compose a work to showcase the talent of his dear friend.

He found that David’s skills combined the conservative and classical character of the German composer/violinist Ludwig Spohr and, at the same time, the brilliant technical elegance of the Italian school, exemplified by Niccolò Paganini.

Thus, it was inevitable that Mendelssohn would choose Ferdinand David to perform at the premiere of the work. He also asked him to take the post of concertmaster at Gewandhaus.

David was not only a magnificent musician, but also an expert technician. Mendelssohn relied on his expertise to perfect the solo part when composing for the violin. They both strove for the greatest delicacy in their style. Moreover, it is said that David created the Concerto’s exquisite cadenza, the ornamental passage which the soloist plays without orchestral accompaniment.

Despite Mendelssohn’s eagerness to have the Concerto performed, numerous engagements and difficulties delayed the premiere for six years.

Finally, on March 13, 1845, the completed "Concerto in E Minor for Violin and Orchestra, Op. 64" was showcased for the first time in Leipzig. David played it with his 1742 Guarneri violin, accompanied by flutes, oboes, clarinets, bassoons, horns, trumpets, tympani, and strings.

The story of the "Violin Concerto" is marked with curious charm. After its creation by Felix Mendelssohn–who is considered the next wunderkind after Mozart–successive "Violin Concerto" performers also turned out to be unusually young and talented musicians.

The remarkable Ferdinand David was discovered at the age of 15 when he debuted as soloist at the Gewandhaus and played the Concerto for the first time.

Several months after this premiere, which was met with a standing ovation, the successful piece was unexpectedly performed again. This came about because pianist Clara Schumann became ill and could not play the concerto of her husband, composer Robert Schumann.  Conductor Ferdinand Hiller changed the program, replacing the Schumann piece with Mendelssohn’s "Violin Concerto." At that time Ferdinand David, though scheduled to play, could not appear due to another engagement and sent his pupil–the 14-year-old Hungarian Joseph Joachim in his place. Young Joachim did so well that this performance launched his career. He was later crowned as one of the most influential violinists of the late 19th century.

Although not an easy piece to perform, the "Violin Concerto" became an opportunity to test and display the technical skills of young musicians. Many young fiddlers have launched concert careers with this piece.

Celebrating the 200th Anniversary of a Great Composer

This year the world celebrates the 200th anniversary of Felix Mendelssohn's birth. Despite his short life, the distinguished German composer lived happily, as his name (Felix means happy) suggests. No wonder, as he turned out to be a musical phenomenon of the 19th century much as Mozart had been in the 18th century.

Influenced by Bach and Beethoven, Mendelssohn has been esteemed as one the most successful Romantic composers ever, has been considered in the ranks of Robert Schumann and Johannes Brahms, and has been described as a real renaissance man for the range of his compositional endeavors.

Mendelssohn’s finesse and unique sense of melody differentiate him from his contemporaries, yet he was often criticized for being superficial and remained misunderstood for a long time. This especially happened in Germany during the reign of the Nazis because of his Jewish origin.

In Great Britain, though, Mendelssohn always stayed on the short list of musical giants. Queen Victoria asked that a statue of Mendelssohn be placed in London's Crystal Palace during its reconstruction in 1854.

The notable German writer Goethe was deeply impressed by the young Felix and  exclaimed, “Musical prodigies are probably no longer so rare; but what this little man can do in extemporizing and playing is miraculous! And I could not have believed it was possible at so early an age."

Mendelssohn’s teacher, Carl Friedrich Zelter, then asked Goethe: "And yet you heard Mozart in his seventh year in Frankfurt?" Goethe replied: "Yes, but what your pupil already accomplishes bears the same relation to the Mozart of that time that the cultivated talk of a grown-up person bears to the prattle of a child."

Concerto for Violin in E minor by Felix Mendelssohn will be performed by violinist Judith Ingolfsson, under the baton of Vladimir Stoupel at Synagoge Rykestrasse, Berlin, on Sept. 5. For more information: http://www.judithingolfsson.com.

Kremena Krumova
Follow
Kremena Krumova is a Sweden-based Foreign Correspondent of Epoch Times. She writes about African, Asian and European politics, as well as humanitarian, anti-terrorism and human rights issues.
SHARE
Friends Read FreeCopyFacebookTweet
You May Also Like