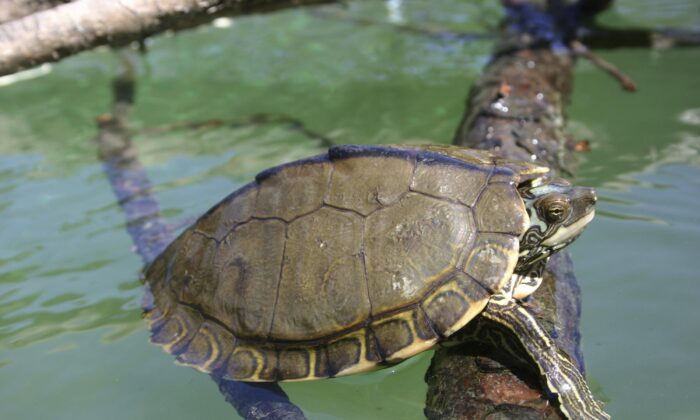 NEW ORLEANS—The U.S. Fish and Wildlife Service announced Monday that it is proposing threatened status for the Pearl River map turtle, seeking to grant added federal protections to an at-risk species found only in Louisiana and Mississippi.

“These native freshwater map turtles are at risk and need our help,” regional director Leopoldo Miranda-Castro said in a news release.

The agency said it also would seek protection for the closely related Pascagoula map turtle, found only in Mississippi, and three other species found in Alabama, Florida, Georgia and Tennessee because they look like the Pearl River turtle.

Without protecting the other species it would be difficult for enforcement agents to stop people from catching and selling Pearl River map turtles—one of the main threats to the species, according to a preview posted a day ahead of its planned publication Tuesday in the Federal Register.

The “threatened due to similarity” status would make it illegal to take the turtles out of the wild but wouldn’t require a recovery plan or other protections the Pearl River turtles will get if it is listed as threatened.

The map turtles’ name is derived from shell markings that resemble the contour lines on topographic maps. Map turtles are also called sawbacks because their shells have a central ridge that sometimes develops saw-like points.

Their intricate markings make them popular pets, the agency said.

“An analysis of online marketplace offerings in Hong Kong revealed that interest in turtles as pets is increasing, that many of the species offered for sale are from North America, and that there is a higher interest in rare species,” the proposal said.

One reason scientists aren’t designating critical habitat is that divulging that information would be a giveaway to poachers about where to hunt for the turtles, according to the proposal.

“Federal protection for the beautiful Pearl River map turtle is long overdue,” said Jason Totoiu, a senior attorney at the Center for Biological Diversity, which joined Healthy Gulf, another ecological nonprofit, in suing to get both turtles listed as endangered. “Endangered” means a species is in danger of becoming extinct in all or much of its range. “Threatened” means a species is likely to become endangered within the foreseeable future.

“These turtles have managed to hang on in just a fraction of their historic range,” Totoiu said. “While it’s disappointing the Service isn’t proposing endangered species protections for both species, I’m hopeful that we can finally turn a corner and begin to recover these lovely turtles and the waterways they once thrived in.”

There are 13 species of map turtles, and the five covered in the agency’s declaration are all so similar that until 1992 they were all considered Alabama map turtles. In 2010, two months after the lawsuit was filed, the Pearl River species was separated from the Pascagoula map turtle.

In addition to the threat from collectors, the Pearl River map turtle faces major threats from habitat loss and damage, including pollution, and climate change, which also threatens the rivers where it lives.

“These turtles are barely hanging on in waterways that are very degraded. Without federal protection they might not survive,” said Cynthia Sarthou, executive director of Healthy Gulf.

In addition to the Pascagoula species, the others protected as similar species are the Alabama map turtle, also found in Georgia, Mississippi, and Tennessee; Barbour’s map turtle living in Alabama, Florida, and Georgia; and the Escambia map turtle in Alabama and Florida.

Publication in the Federal Register will start a 60-day public comment period.