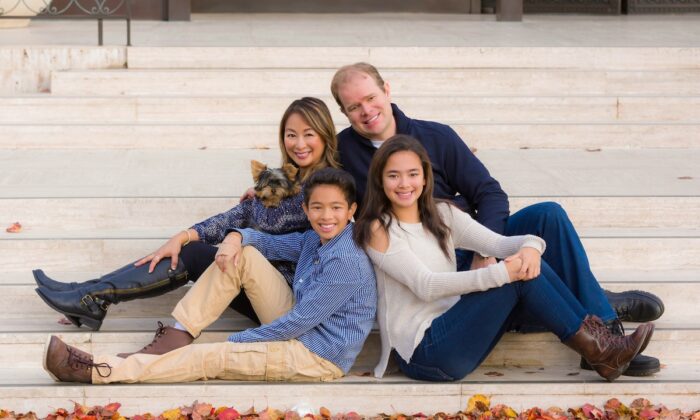 “Daddy drank a lot,” Lianna Treitler responded when her mother asked about the concert she and her father attended the previous evening. That’s when her dad, Marc, knew he needed to seek help, and achieve sobriety.

Marc Treitler is 47 years old, and grew up in a family of somewhat functional alcoholics in San Diego. Drinking was a large part of the family culture. While his mother and father weren’t particularly drawn to alcohol, his aunt and uncles were alcoholics.

Family events and dinners always featured alcohol, and tales of drunken adventures were often the subject of conversation.

“It glamorizes it in the kids’ head,” Treitler told The Epoch Times.

This environment, combined with his family’s genetic history, primed Treitler to become an alcoholic himself.

Treitler had his first drink at age 15 when he was at a friend’s house. The friend’s father was Russian, and served the boys vodka. Before long, he had passed out.

Treitler developed an addiction to alcohol over time. When he attended college at UCLA, the drinking really accelerated.

“Towards the end, it was, again, beer to mask what you’re doing, but a lot of vodka behind the scenes,” Treitler said.

Treitler’s alcoholism had a profound impact on both his family and professional life. He found himself not emotionally present for his family, which caused tension in his marriage. As an entrepreneur and attorney, he found himself showing up to work hungover and taking naps.

Treitler often spoiled his children in order to compensate for his behavior. His daughter’s favorite musical artist was David Archuleta, and he decided to take her to one of his concerts for father–daughter time.

“I was looking forward to it for weeks,” Lianna said.

Lianna noticed that her father would continuously disappear at the concert and return with a beer in hand. As an 8-year-old, all she could remember was his drinking, and not the concert itself.

After the concert, Treitler thought he had controlled his drinking well. However, the next day, he asked his wife if Lianna had enjoyed the show. “She said you drank too much, and she was worried about you,” he remembered his wife replying. Treitler was crushed.

“I think that’s what finally hit me in the chest,” Treitler said.

The following weekend, Treitler was at a company event at Mandalay Bay in Las Vegas. He became extremely intoxicated and had to be taken to his hotel room in a wheelchair.

“I think I did that intentionally to finally ask for help,” Treitler said.

The next morning, he asked his coworkers to help him seek treatment. A friend of his, who was also an alcoholic, suggested a facility in Del Mar, California.

At first, Treitler’s ego was one of the largest obstacles on his path to recovery. As a successful businessman and family man, it was challenging for him to accept that he had an addiction.

About halfway through his recovery, one of his counselors sat him down and told him that the smart, successful alcoholics were the ones who die, because they don’t listen to others for help.

Once Treitler started to listen, his recovery process became much easier.

During his recovery, Treitler learned a lot about himself. He discovered that he had used alcohol to cope with stress and anxiety. He also learned, looking back at his family genetic history, that he had been particularly susceptible to alcohol abuse. He’s been sober since June 26, 2009.

Treitler now is able to be emotionally present for his children and his wife. He also openly discusses alcoholism and addiction with his children, which led him to write the books “My Dad is an Alcoholic, What About Me?: A pre-teen guide to conquering addictive genes,” and “Alcohol Drugs & You: A Young Person’s Guide to Avoiding Addiction,” with his daughter Lianna, who also accepts speaking engagements whenever she’s asked.

The Treitlers have supplied hundreds of free copies of their books, and continue to do so. The books are also available for anyone who asks.

“The goal is to get the books out there, to get kids to read it. There’s really nothing like it out there, so the more kids we get it to … the more likely we are able to help families break the cycle and help kids stay away from this,” Treitler said.