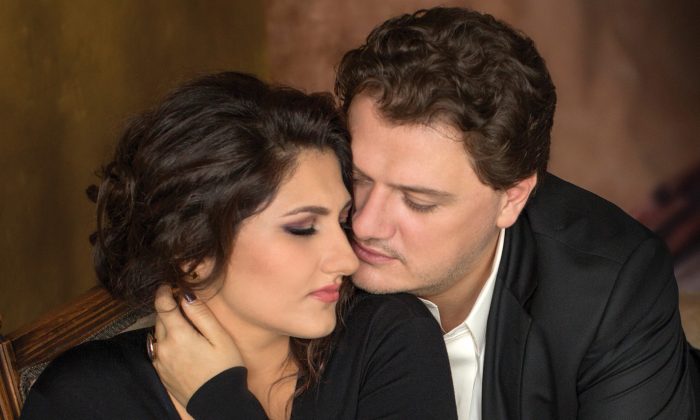 Fatal Attractions on the Opera Stage: Soprano and Tenor Arias and Duets by Alieva and Antonenko

Sparks fly on “Alieva & Antonenko” (on Delos), a CD of arias and duets by Verdi, Puccini, and Tchaikovsky by two acclaimed young singers. The CD could be called Love and Death because all the operas end with tragedy.

Soprano Dinara Alieva was born in Azerbaijan and has sung at the Bolshoi as well as the Vienna State Opera, Frankfurt Opera, and Deutsche Oper Berlin. She has also won a number of international competitions and appeared at Carnegie Hall.  She studied with Montserrat Caballé, who described Alieva’s talent as a “gift of Heaven.”

One sign that Latvian tenor Aleksandrs Antonenko has achieved stardom is the fact that he will play the title role in Verdi’s “Otello” for the opening night production of the Metropolitan Opera’s fall season. Indeed, he may now be the pre-eminent Otello on the international scene since Domingo stopped singing it. Last season, Antonenko was a passionate Don José in Bizet’s “Carmen” at the Met. Before that, he was the handsome Prince in Dvorak’s “Rusalka” with Renée Fleming.

The CD begins with “Celeste Aida” from Verdi’s “Aida.” This is an example of Verdi’s practice of giving his singers, especially tenors, highly demanding music as soon as they appear. (The composer did this in “Otello” as well.)

Antonenko provides the right stentorian sound as the lovelorn warrior. He ends with a powerful note, albeit not with the diminuendo the composer specified. (Franco Corelli is one of the few who managed it, and sometimes he missed.)

Alieva then delivers a thrilling “Ritorna Vincitor,” expressing Aida’s conflicted feelings about loving Radames, the enemy who had defeated her father and the Ethiopian people.

The opera ends with the Tomb Scene, in which the two lovers are buried alive. He was sentenced to death for revealing military secrets to Aida’s father, Amonasro. Radames thinks that Aida escaped to safety but discovers that she has crept into the tomb to die with him.

Puccini’s “Tosca” is another popular opera with memorable melodies and an ending where the main characters meet their end. Painter Cavaradossi sings “Recondita armonia.” He is painting a blond woman he spotted in church as Madonna, but he is obsessed with his dark-haired lover, Tosca.

Unfortunately, the heavy of the piece, Baron Scarpia, is also infatuated with her. He arrests Cavaradossi and promises to spare the painter from execution if Tosca will give herself to him. Tosca sings one of Puccini’s most beautiful melodies, “Vissi d’arte,” about how she devoted her life to love and art.

Tosca pretends to agree to the police chief’s demand, but after he sends what she believes to be an order to allow Cavaradossi to live, she fatally stabs Scarpia.

Awaiting his execution, Cavaradossi sings “E lucevan le stelle” about the irony of facing death after he has finally found the love of his life. Antonenko’s voice is a bit heavy for the role and he doesn’t have an Italianate sound. His baritonal tenor is closer to Jonas Kaufmann than the brighter sound of Luciano Pavarotti.

For some reason, the album presents the love duet from Act I after the tenor’s third act aria. Perhaps the record company wanted to give “Tosca” a happy ending.

Verdi’s “Il Trovatore” has a ludicrous plot, and the Marx Brothers had a lot of fun with it at “A Night at the Opera.” Nevertheless, the opera is popular because of Verdi’s unforgettable music. The only proviso is that the opera requires three top singers. It gets two here, since the baritone villain’s arias are not included. In the “Scena, aria e miserere,” Leonora plans to save her lover Manrico by offering herself to the evil Count di Luna (who is in reality Manrico’s brother), after which she plans to commit suicide with poison secreted in her ring. From the tower where he is imprisoned, Manrico sings of his love for Leonora. She responds that she will save his life or join him in death.

In Tchaikovsky’s “Queen of Spades,” the tenor, army officer Herman, is a compulsive gambler. Though Lisa (granddaughter of the old Countess) is engaged to another man, Herman wins her over, appearing on her balcony and pleading with her in “Herman’s aria” not to reject him.

What Herman is after is the Countess’s secret to winning card games. After Lisa helps him gain entry into her grandmother’s chambers, the elderly woman dies and then divulges her secret. (She appears as a ghost.)

In “Lisa’s aria,” the heroine reveals her torment about the conflicts between love and duty. Her final duet with Herman, “A yesli mne v otvet,” starts with declarations of love, but he soon pushes her out of the way so he can go to the casino to gamble. Realizing that Herman is a louse, Lisa drowns herself in the canal.

The singers make a strong impression throughout, but they are especially potent in the Tchaikovsky excerpts. The Met should sign up Alieva, a powerful soprano with dramatic flair. In the meantime, you can catch Antonenko’s “Otello.”

This CD will please opera lovers.