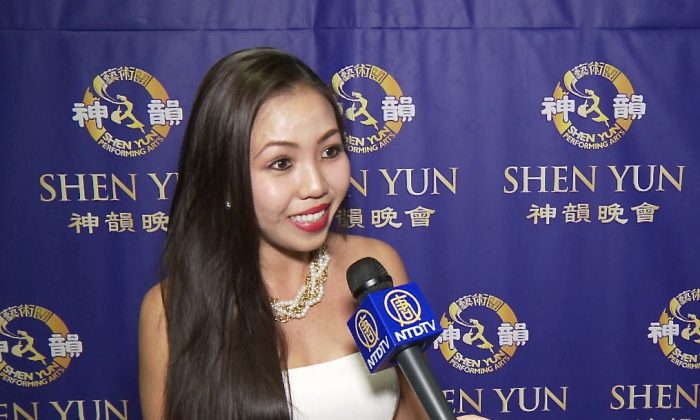 Angelina Johnson attends Shen Yun Performing Arts at the Segerstrom Center for the Arts, on March 15. (Courtesy of NTD Television)

COSTA MESA, Calif.—Shen Yun Performing Arts New York Company has been on a run of sold out performances this past week at Segerstrom Center for the Arts. It was no different March 15 as a packed theater of show-goers enjoyed traditional Chinese culture on stage.

Fashion designer Angelina Johnson was among the audience, and she was delighted.

“I think it’s amazing. I love the colors and the costumes,” she said. “I think it looks really great. I really love it.”

Shen Yun is a non-profit, New York-based classical Chinese music and dance company that creates an all-new production each year, traveling to over 100 cities in some 20 countries on its mission to revive the beauty of ancient Chinese culture.

The Shen Yun website explains, “Through the universal language of music and dance, Shen Yun weaves a wondrous tapestry of heavenly realms, ancient legends, and modern heroic tales, taking you on a journey through 5,000 years of Chinese culture. Its stunning beauty and tremendous energy leave audiences uplifted and inspired.”

The performance includes a variety of vignettes, and in each dance piece the performers display different costumes. Hundreds of different bright, handmade pieces are created each season by Shen Yun costume designers. “Their objective is an authentic presentation of the attire that comes from China’s divinely inspired traditional culture, and a consummate stage effect,” says the company website.

Ms. Johnson said that she is part Chinese and has an affinity to the culture.

“I love the culture,” she said.

She would recommend seeing Shen Yun to anyone, “I would say that you should go and check it out because this show is really spectacular.”

Among the same enthusiastic audience members was Nancy Fox, published author and editor of children’s books. “It’s wonderful. Beautiful artistry,” she exclaimed after watching the performance of the world renowned Shen Yun.

Ms. Fox explained, “The music was lovely, the costumes were terrific and the backdrops; it was very imaginative.”

Another aspect of Shen Yun that delighted Ms. Fox was the traditional Chinese culture. “Very educational,” she said, “learning about the Chinese stories and history.”

Shen Yun’s mission is not just to entertain, but to revive China’s profound 5,000-year-old culture and spread it to the world.

“Sophisticated dance techniques, an orchestra joining instruments from both the East and West, beautiful costumes, and a stunning back drop—this is Shen Yun at first glance. But digging deeper, one discovers a sea of traditional Chinese culture,” explains the website. “Mortals and divine beings merge on stage as one. Principles such as benevolence and justice, propriety and wisdom, respect for the heavens, and divine retribution, all come to life, washing over the audience.”

Ms. Fox marveled at the classical Chinese dance, “I didn’t realize how amazing that would be.”

At the core of a Shen Yun performance is Chinese dance, which is “known for its incredible flips and spins, and its gentle elegance, it is one of the most rigorous and expressive art forms in the world,” explains the website.

Reporting by Laura Gu and Albert Roman and Thanh Le