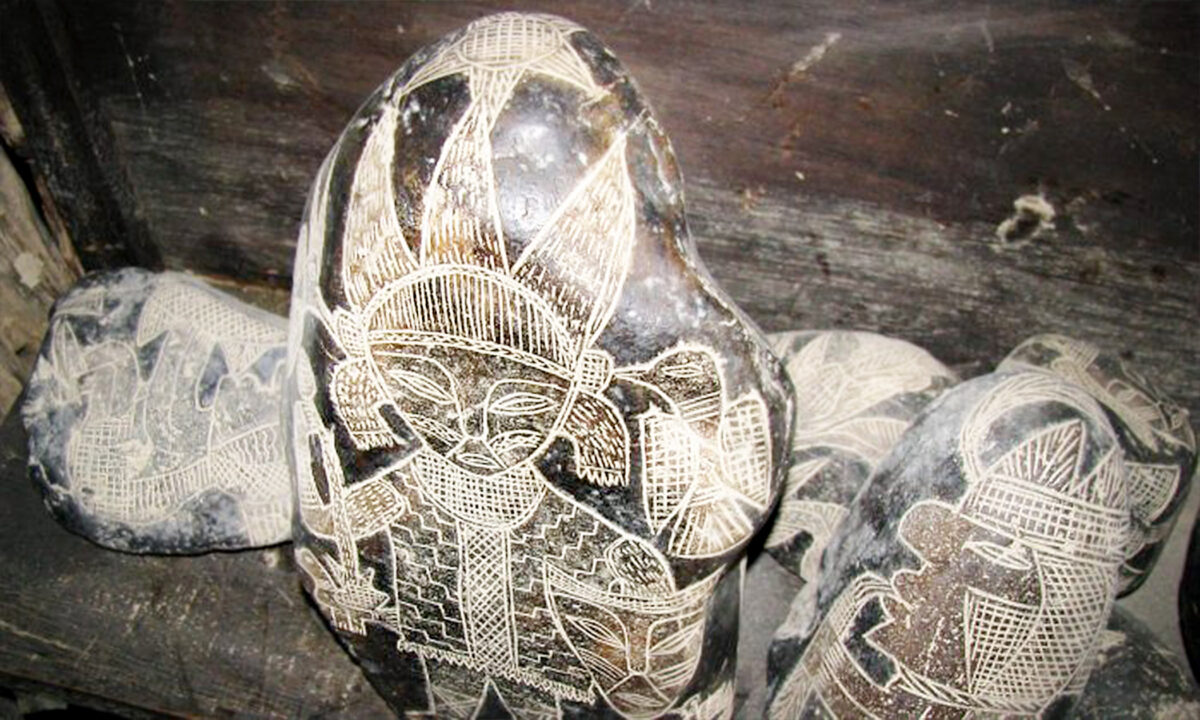 I never thought a bunch of rocks could capture my imagination so thoroughly.

As I think back over my three years on the road, biking with my husband and children from Alaska to Argentina, I never thought I would see 20,000 extraordinary rocks intricately carved by some mysterious ancient civilization. But I did. Here’s what I discovered.

All it took was one quick look inside the door of Dr. Cabrera’s Stone Museum in Ica, Peru, for me to want more. Fortunately, Dr. Cabrera’s daughter, Eugenia, willingly opened the museum to us and agreed to show us around. And what a tour it was, I hung on her every word!

Dr. Cabrera’s Stone Museum is a small, private museum located on the Plaza de Armas in Ica, Peru, about four hours south of Lima. It was started by Dr. Javier Cabrera to safeguard the many mysterious carved rocks found in the area.

Cabrera died a few years ago and his daughter now maintains the museum, passing on some of her father’s wisdom.

It is reported that more than 50,000 carved stones have been found in the desert surrounding Ica. About 20,000 of them are in the museum.

The first thing one notices about the stones, besides the vast number of them, is that they are much more dense than normal stones. They have two layers, black basalt in the center and a shiny black andesite as an outside layer. They come in all sizes, from small enough to fit in your palm to one meter high.

Regardless of their size, they all have the two layers and all of them are intricately carved with great precision.

The stones are carved with scenes of ancient people. The carvings depict a huge variety of scenes from everyday life. The most spectacular carvings (and most mysterious) appear to display advanced medical knowledge including brain surgery, heart transplants, and genetic experimentation.

The stones seem to depict someone performing a heart transplant in great detail, as well as someone taking a brain out of a patient and hooking it up to some sort of apparatus to keep it alive.

Unfortunately, we don’t know for certain what the carvings mean. When the stones first started appearing in the desert around Ica, Peru, it is said that nobody knew what they were and a farmer started selling them to tourists.

Purportedly, when the government threatened to jail the farmer for selling antiquities, he claimed he carved them himself. At this point, the official story is that one farmer or a small group of people carved the stones for profit.

There are holes in this story though.

Given the fact that 50,000 stones have been found so far (all of them in the desert around Ica), it would be very difficult for a small group of people to create them. Let’s just say that they’ve been carving them for 50 years now; that means they’ve carved 1,000 stones every single year for 50 years. In order for that to happen, they would need to be churning out three stones per day.

Is it possible that one man dedicated himself to carving these stones? Or a small group? How have they remained such a secret? How would a poor farmer in rural Peru know the things that are depicted on the stones?

Nobody really knows who carved the stones or why, but Cabrera believes they were an encyclopedia of ancient knowledge.

His theory was that a super-intelligent civilization lived in the area. It was a highly advanced society with complex knowledge of astronomy, physics, and medicine. These ancients also knew that a cataclysmic event was about to occur, which would destroy nearly everything on Earth.

In their desperation to save their knowledge and pass it on to future generations, the people of the society carved rocks. Rocks, being durable and virtually indestructible, would be able to survive the cataclysmic event.

They placed the rocks in one location for safekeeping, but they have since been scattered around, washed away in rivers or by other natural processes. Cabrera believed the rocks were stored in one cave, which has yet to be found.

The stones depict dinosaurs, meaning this civilization would have coexisted with the dinosaurs, countering conventionally accepted timelines of human history.

Theories abound about how and why these rocks were carved. What do you think? Please leave your thoughts in the comments!

After 21 years as a classroom teacher, Nancy Sathre-Vogel and her husband quit their jobs and, together with their twin sons, climbed aboard bicycles to see the world. Now they are back in Idaho, putting down roots, living a different type of adventure. It’s a fairly sure bet that you’ll find her either writing on her computer or creating fantastical pieces with the beads she’s collected all over the world.