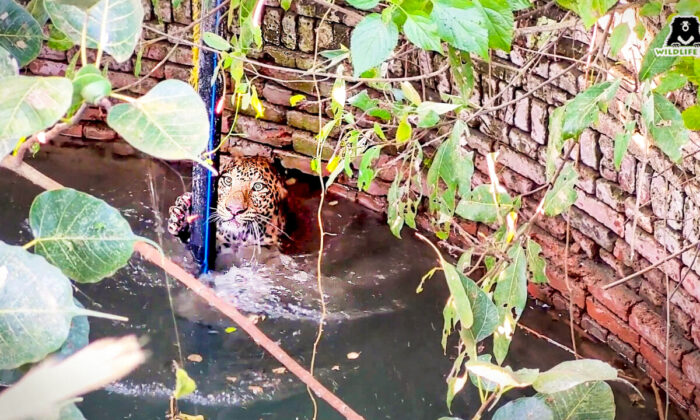 The intense moment a drowning leopard was rescued from a well has been caught on camera.

The approximately 7-year-old male leopard had fallen into an open well in Beslar village in Maharashtra, western India.

A local farmer spotted the big cat paddling to stay afloat as he struggled to stop himself from drowning in the water.

The farmer immediately alerted the Forest Department India and Wildlife SOS, a rescue and rehabilitation nonprofit for wildlife in distress across India.

A cage trap was then lowered into the well to safely rescue the leopard from an extremely dangerous, near-death situation.

Visuals show the moment the leopard clings to a pole first before a cage is lowered. The instant the cage is opened the big cat quickly lumbers into it for safety.

The leopard was taken to the Manikdoh Leopard Rescue Centre for medical attention.

Wildlife veterinary officer from Wildlife SOS Nikhil Bangar said, “The animal was exhausted from the ordeal, and will be kept under observation for a few days till he is deemed fit for release.”

Such incidents have become quite widespread in the region. One week earlier, a leopard was rescued from a 35-foot-deep well in the same region.

“This is becoming a common occurrence across Junnar as leopards often try to catch prey in open wells while on foraging trips,” said Ajit Shinde, a range forest officer. “We have advised the villagers to take precautionary measures by covering up open wells.”

The nonprofit has pushed to fence areas around open wells or cover them to avoid such incidents and save lives of the animals.