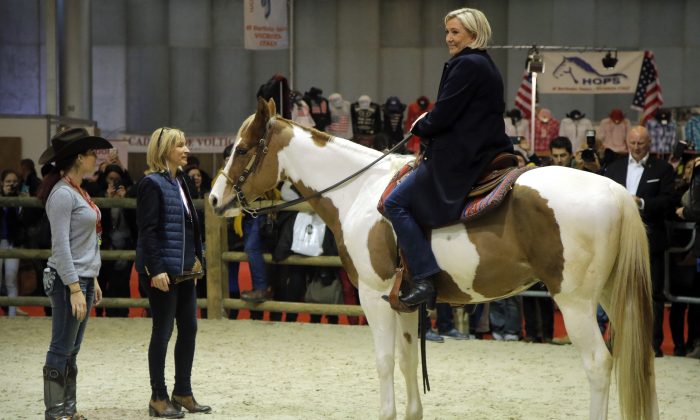 Far-right leader and candidate for next spring presidential elections Marine le Pen rides a horse as she visits the annual Horse Fair in Villepinte, outside Paris, on Dec. 2, 2016. (AP Photo/Michel Euler)
International

PARIS—French anti-immigration presidential candidate Marine Le Pen says the spring election will pit nationalists and patriots like herself against those in favor of globalization, the European Union and immigration.

Speaking Friday at an annual horse fair outside of Paris—where she donned a cowboy hat and mounted a horse—Le Pen said Socialist President Francois Hollande’s decision not to seek a second term won’t change her strategy. Hollande made the announcement late Thursday.

Le Pen predicted that Prime Minister Manuel Valls will run instead as the Socialist presidential candidate, facing her and conservative former Prime Minister Francois Fillon, who won the right’s primary, among others.

“You know, I don’t believe in this left-right fracture. On the one side are nationalists, patriots. On the other, globalizationists, Europeanists and so, by definition, immigrationists,” she said, making up her own descriptions.

Valls, meanwhile, praised Hollande’s decision not to run and defend Hollande’s economic record without saying if he plans to seek the presidency himself, as many assume he will.

“We must defend (Hollande’s) actions, and I’ll do it, as I’m doing it tirelessly in my duties since 2012,” Valls said in a speech Friday in the eastern city of Nancy.

Valls was Hollande’s interior minister from 2012 to 2014, when he became the French prime minister. He said Friday that Hollande has always put France’s “general interest” and “unity” at the top of his priorities and praised “a choice that was not easy” and a man whose dignity “deserves respect.”

Valls said last week he was “ready” to compete in next month’s Socialist primary. Other presidential contenders have already announced their intentions to run in the primary, including former economy minister Arnaud Montebourg.

In his televised address on Thursday night, Hollande avoided saying if he would support Valls—or any other candidate.