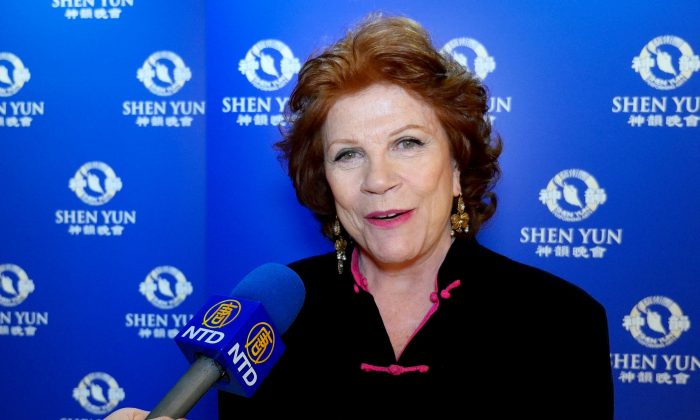 NEW YORK—Some of the biggest compliments Shen Yun Performing Arts receives are from artists and musicians themselves, who are moved after seeing the world-renowned performance.

Such was the case when Christine Walevska, a highly acclaimed cellist, who at the start of her career was compared to virtuoso violinist Fritz Kreisler, saw the performance at New York’s famous Lincoln Center on March 5.

“It is just spectacular,” said Ms. Walevska, who admitted she’s seen Shen Yun “many times” before and plans to keep seeing it.

Naturally, being a musician herself, Ms. Walevska had an interest in the music of Shen Yun, which combines both Eastern and Western sounds.

“The orchestra is beautiful and, of course, everybody enjoys the mix of the Western instruments with the ancient traditional Chinese instruments, and the sound is unique.”

So how does Shen Yun blend the two sounds into one orchestra? According to its website, Shen Yun uses the Western Orchestra to serve as a foundation, that helps to accentuate the sound of the Chinese instruments.

While traditional Chinese music emphasizes the effect of inner feelings, the Western music focuses on the overall effect—arrangement and harmony are paramount to its sound.

The orchestra though is just one part of a Shen Yun performance. Shen Yun, which has been touring for a decade, takes its audience on a 5,000-year journey of rich Chinese culture. Through not only music–but also Chinese classical dance–its viewers experience what it was like when the China was known as the Divine Land.

Chinese dance encompasses the deep cultural traditions of China and is Shen Yun’s specialty. The richly expressive movements help portray the feelings and personalities of characters-from heroes to celestial maidens. The flips and spins of the dancers–together with its gentle elegance–make for one of the most expressive art forms in the world.

The overall performance gives viewers an experience of what being in the presence of those heavenly realms and ancient legends must have been like. And it’s why people like Ms. Walevska keep coming back.